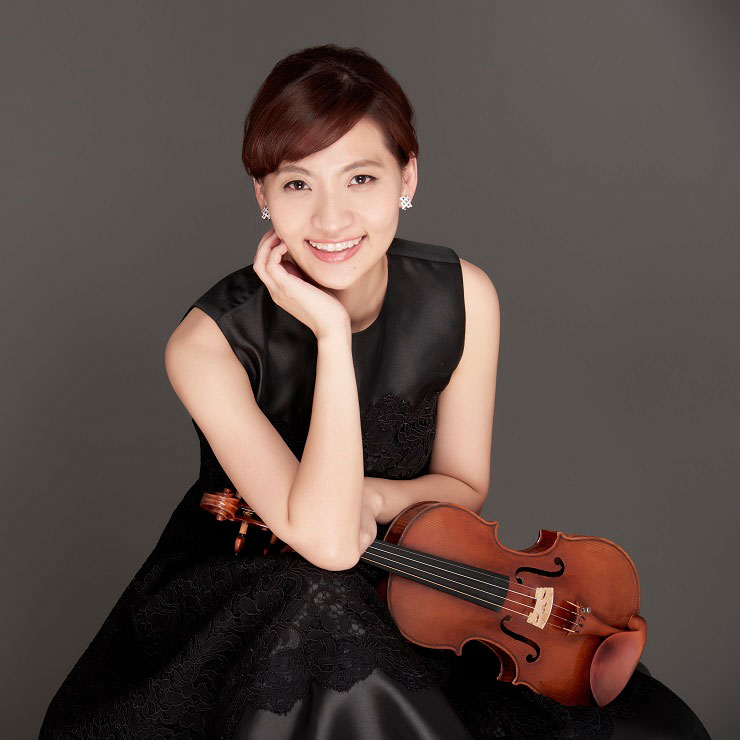 Name: 李宜錦
Date of Birth: December 18, 1977
Place of Birth: Kaohsiung,
Did You Know?
Li I-ching (李宜錦) began playing violin in elementary school, performing on stage for the first time at age 10. Later, she went to the United States to study music and has earned international plaudits with her impressive performance. In 2002, at the age of only 25, she became associate concertmaster for the National Symphony Orchestra, and two years later, she became the NSO’s youngest ever concertmaster.

Young Taiwanese violinist Li I-ching (李宜錦) is known for both her modesty and her outstanding technical skill. She began learning violin as a child and was on stage for the first time when she was ten years old. She was profoundly enamored with the visual and aural impact of working with an orchestra, and this marked the start of a lifelong career in music. After graduating from the music class at Kaohsiung Senior High School, at the recommendation of her teacher, she traveled to the U.S., and enrolled in the New England Conservatory of Music in Boston, Massachusetts, to study under the guidance of James Buswell, himself a student of master violinist Ivan Galamian.

During the years of undergraduate and graduate studies, she was already clear that she wanted to work with an orchestra in the future, and she made a lot of effort preparing for the orchestra exams. While in the U.S., she accumulated rich experience of stage performances, taking part in a variety of international performances and winning big prizes, including first prize in the Musicorda Concerto Competition and silver in the Fischoff International Chamber Music Competition. She was invited to perform at the Pacific Music Festival in Sapporo, Japan (1998), Tanglewood Music Festival in Boston (2000), and Schleswig-Holstein Musik Festival in northern Germany (2001).

After receiving her Master's degree with an award for academic excellence, she was faced with a choice of continuing to doctoral level in the U.S. or returning to Taiwan to launch her career as a concert violinist. She applied for a Ph.D. Program in the U.S. and the position of associate concertmaster for Taiwan's National Symphony Orchestra (NSO) at the same time. In an interview, Li spoke of her inner conflict at the time learning that she received unanimous approval of NSO juries for the post. While it was an enormous honor to be selected by the NSO, it was difficult to up and leave the life and friends in the U.S. Eventually, she chose to return to Taiwan and to contribute to the music circle there.

Li was no stranger to serving as associate concertmaster of an orchestra, having held similar positions in school orchestras and music festivals. However, this was her first time as a professional concertmaster, and she felt that she still had much to learn. In just two years, she built up her experience with the orchestra, developing her delicate and impressive style. With her strong skills and passion for music, she soon rose to the position of concertmaster, being the youngest person to hold this position in the NSO since its founding.

Despite being with the orchestra for only two years, she was expected to lead it. She revealed that her secret to achieve it was taking the approach of a student and absorbing all she could like a sponge. Li looked at previous concertmasters, veteran orchestra members, music directors, conductors, and soloists as teachers, learning from their experiences and attitudes toward life. As concertmaster, she was able to resonate with the whole orchestra, which made her feel as though she were part of a single communal organism with them, every voice melding into one, tacitly tied to the conductor and moving forward together. When it all came together like that, it was a source of unsurpassed excitement and emotion for her, said Li.

In addition to performing with the orchestra, Li is also a dedicated promoter of modern music and performances of various categories, eagerly seeking out a diverse array of on-stage experiences. She was invited to perform works by contemporary American composer Alan Fletcher and Grammy winners John Corgliano and John Harbison, as well as "Remote (遠邈)," a master piece by Taiwanese composer Yang Tsung-hsien.

Li I-ching loves chamber music. While studying in the United States, she was selected a member of the string quartet of the New England Conservatory of Music three years in a row. In Taiwan, she continued to engage with different forms of chamber music, having sparkling inspirations with various musicians.

After 17 seasons with the NSO, in 2019, Li I-ching resigned from the concertmaster role and began working as an educator at the Music Department at Taipei National University of the Arts. Now the mother of two children, Li has also turned her enthusiasm to the promotion of children's music education, including taking part in the "NSO Dear Little Ones (NSO媽媽說故事)" concert series and producing albums like "Do You Hear Beethoven (頑皮的莫札特)," "Little Mozart for Little Ones (聽見貝多芬)," and "Strauss vs. Strauss (史特勞斯們)," which have been warmly received among listeners of all ages. She hopes that by passing on what she’s learned to younger generations, she can share her own experience and help the young generation appreciate music in a simple and easy approach.