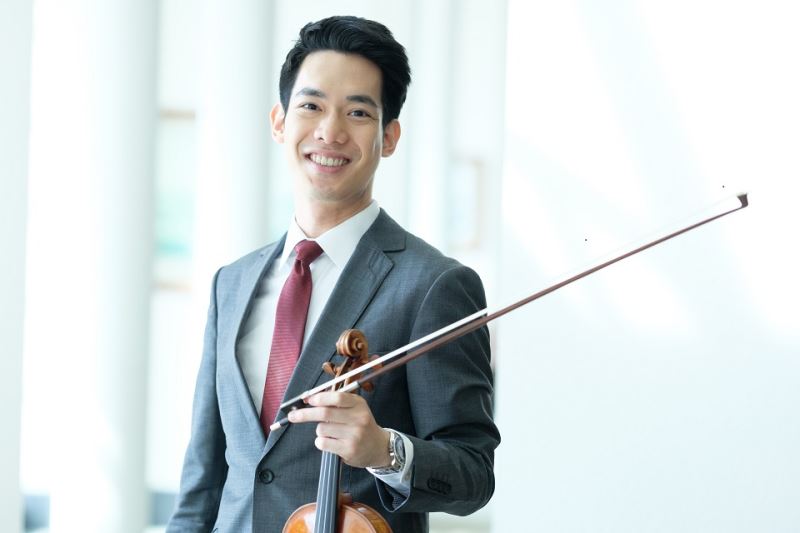 Name:林品任
Date of Birth: July 6, 1991
Place of Birth: Phoenix, Arizona, USA
Did You Know That...?
Richard Lin has become one to watch among Taiwan's emerging young violinists in recent years, and he is one of the most internationally renowned Taiwanese violinists. In 2017, he injured his spine in a car accident when travelled to Shandong, China, for a performance. As a result of this injury, he was left unable to practice for a time. Fortunately, he recovered well, and, the following year he even took the first prize in the International Violin Competition of Indianapolis in Indiana, USA, becoming the first Taiwanese to take the top title.


Richard Lin was born in Phoenix, Arizona, in 1991. Soon after he was born, his family chose to return to Taiwan. As a result, he grew up in Taipei and Taichung, and received his primary and secondary education in Taiwan. He showed a talent for music from an early age, beginning his studies of violin at the age of four. When he was just 11 years old, he performed Saint-Saëns' Violin Concerto No. 3 with the Taipei City Symphony Orchestra at Zhongshan Hall in Taipei.

Four years later, in 2006, Lin joined the music program at Taichung Second Senior High School. Two years after that, he left for the United States to pursue higher education and ultimately graduated from two prestigious institutions, the Curtis Institute of Music in Philadelphia and the Juilliard School in New York City, where he studied under renowned violinists Aaron Rosand and Lewis Kaplan respectively.

In an interview, Lin shared that his father has long been a great lover of classical music, with a particular taste for the works of violinist David Oistrakh. When he was a child, his father would often talk to him about violin competitions, and thus inspiring his interest in the instrument. However, due to family factors, Lin's father never had the opportunity to learn it himself, and he pinned all his hopes on his son. When he was four years old, the younger Lin received from his grandmother a child's violin, with which he began learning to play in a group class at kindergarten.

Lin had dreamed of studying abroad from an early age. He has commented that while aspiring world-class musicians in Japan and South Korea are able to complete an education in classical music in their home countries, Taiwanese music students who want to make a mark internationally need to go abroad. So, he has always hoped to help transform Taiwan's music education environment.

Lin's music is full of warmth and musicality, and he has shone on the international stage with widely recognized performances. In two different international competitions, he has become the first Taiwanese to take top honors. In 2016, his superior technique and strong musicality earned him fifth place in the Henryk Wieniawski Violin Competition in Poznan, Poland, making him the first Taiwanese to make it to the top five. Two years later, he won first place in the International Violin Competition of Indianapolis, the first ethnic Chinese to win the honor. Lin said afterwards, joining the competition in Indianapolis, he didn't think about winning and just wanted to go in and do his best, taking the opportunity to perform in the competition the music he has favored the most and performed the best. In the end, though, he did walk away the winner, and this became a major milestone in his career.

In 2020, the COVID-19 pandemic meant that Lin had no chances to perform. At the invitation of the National Taipei University of Education, he has taken up a position as a full-time professor of music, mainly focusing on performance classes and providing guidance to young Taiwanese musicians. While he was abroad, he was always thinking about what he could contribute after returning home. Thanks to this new role and an unforeseeable pandemic, he has been able to accomplish something which 20 years earlier he thought would have to wait until he is in his 50s. On top of that, with Lin just about to turn 30 this year, he has also set a record as the youngest professor of music in Taiwan.