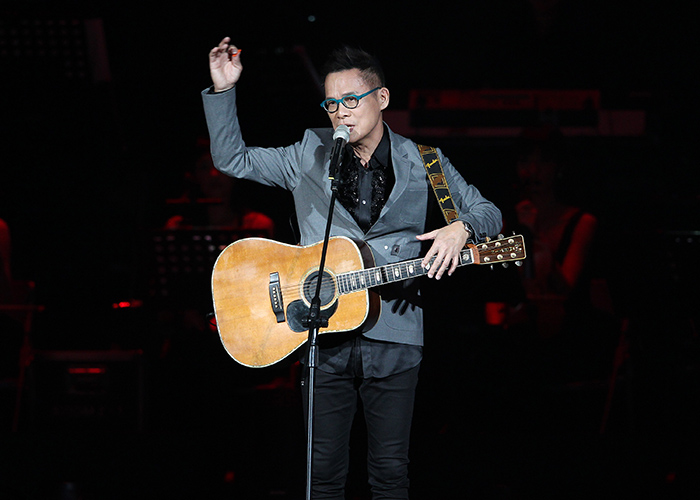 ‧ Chinese Name: 羅大佑
‧ Date of Birth: July 20, 1954
‧ Place of Birth: Miaoli, Taiwan
‧ Did You Know?
Dubbed as Taiwan’s "godfather of Chinese pop music" and "eternal cynic and rocker" Lo Ta-yu, began his career as a trained and licensed physician who dabbled in music and went on to become a truly revolutionary figure in Taiwanese music. Not only did he blend Western rock with Eastern aesthetic sensibilities, but he also produced songs known for their fearless social critique and consciousness, songs which were instrumental in capturing the zeitgeist. During the 1980s, he created songs that were not just entertaining, but also cultural events that shook a generation.

Born to a family of doctors, Luo showed an interest in music from a young age, but ultimately acquiesced to his parents’ wishes to pursue a career in medicine. After graduating from Kaohsiung High School, he pursued a degree in medicine from China Medical College (now China Medical University), passed the physician’s licensing exam, and was trained as a radiologist, working as a surgical intern, radiologist, and internist.

In 1972, he joined a student band as a keyboardist, marking the start of a long resume of musical performances that were well received by audiences. In 1974, he composed the music for St. Viator Catholic High School alumnus Lin Hwai-min’s Cloud Gate Dance Collection, and two years later, he began to fully commit himself to commercial music composition, writing songs for movies such as "The Golden Age," "By Love Obsessed," and "The Road That Never Ends." 1981 saw him work for the first time as a producer, producing Sylvia Chang’s "Childhood," which led to him attracting wider public notice.

On April 21, 1982, he released his debut album, "Zhi Hu Zhe Ye," which sent shockwaves through the Chinese-language pop music scene, particularly for the lyrics of single “Lukang, the Little Town,” which explored the dramatic social changes coming in the wake of Taiwan’s economic boom and which captured attention throughout society.

In 1983, he released his second album, entitled "Master of the Future." On the cover, Lo appears in dark sunglasses and dressed all in black, cutting a figure very much reminiscent of renowned American folk singer Bob Dylan. However, the heavy social critique that characterized his music soon saw Lo come under pressure from outside forces, and so in 1985, he chose to leave it all behind and practice medicine in the United States. His song "Rolling Red Dust," he felt, was an apt expression of his state of mind at the time. After leaving, he found himself wandering for the next 29 years, moving 19 times and spending time living in New York, Hong Kong, Beijing, and Shanghai before returning to Taiwan with his wife and daughter to settle, having found himself missing his homeland.

Even while abroad, though, Lo continued to work tirelessly on his musical craft. In 1987, he won the "Asia's Most Outstanding Artist" award and went to Hong Kong to continue building his career. In 1988, he released his fourth Mandarin album, “Lover/Comrade.” Two years later, he founded Music Factory in Hong Kong, providing a platform for original music producers to exchange and collaborate; however, in 1999, the operation closed its doors.

Over the years, Lo Ta-yu has created numerous works across Mandarin, Cantonese, and Taiwanese languages, as well as compilations, live albums, film scores, and even two books: “Yesterday’s Testament” and “Childhood,” which were published in 1988 and 2002 respectively. In his music, Lo often blends pop with literary sensibilities, elevating pop music to an art form that can stand alongside film, literature, and classical music.

His musical talent has been recognized over the years with no small number of awards, including nominations and wins at the Golden Melody Awards, Golden Horse Awards, Hong Kong Film Awards, and Asian Film Awards. In 2021, he was honored with the Special Contribution Award at the 32nd Golden Melody Awards. The jury made the remark that Lo’s music production in 1980 almost single-handedly spawned a revolution in Chinese popular music at a crucial time when the social environment was undergoing some dramatic changes.

Lo Ta-yu has demonstrated throughout the decades that a singer-songwriter can have not only the soul of a poet, but also the profundity of a philosopher and the spirit of a revolutionary. His composing and arranging talents have revolutionized the linguistic texture of songwriting in Mandarin, having a lasting impact not only on the music scene but also on the broader society and culture, ushering in a transition from naivety to worldliness and creating a more profound, more mature worldview.