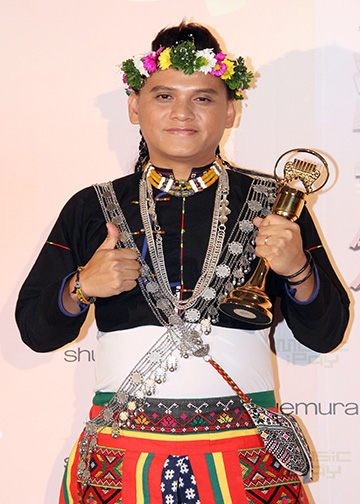 ‧ Chinese Name: 桑布伊．卡達德邦．瑪法琉
‧ Date of Birth: November 15, 1977
‧ Place of Birth: Taitung, Taiwan
‧ Did You Know?
Sangpuy Katatepan Mavaliyw is a singer from the indigenous Pinyumayan people and has won the Golden Melody Award for Best Singer (Indigenous Language) twice, with the judges remarking that his "soulful vocals make him an icon for a new generation of Taiwanese voices." From childhood, Sangpuy showed a profound gift for music and had the good fortune of being well taught by tribal elders while growing up. Through this, he was able to learn his threatened ancestral language and the songs and culture of his people, laying the foundation for his future compositions. Ever since then, he has remained committed to the cause of indigenous music, nurturing what started as a mere sprout into a hulking tree whose branches have extended to other shores, opening new vistas to the world.

Sangpuy Katatepan Mavaliyw grew up in the Pinuyumayan village of Katratripulr in Taitung and is a member of the Mavaliyw family within the Katatepan clan. Growing up among Pinuyumayan society, he used the Pinuyumayan language in his daily life to communicate with the elders of his village and family, showing both a great talent for and interest in traditional tribal chant-songs, acquiring substantial skill in them. Sangpuy began practicing the guitar with his older brother in sixth grade and started experimenting with composing in his native language in high school.

After completing his compulsory national service, Sangpuy returned to his village and spent six years as president and vice president of the local youth association. In this role, he helped with organizing festivals, weddings, funerals, and all manner of other events, as well as assisting in handling agricultural matters. Along the way, he shared his knowledge of traditional culture with the youth by teaching them songs; with the Pinuyumayan traditionally not having an orthography of their own, music and song have long been essential conduits for keeping history and culture alive.

In 1999, Samboi joined The Flying Fish and Cloud Panther Music Collective, one member of which is renowned indigenous folk singer Ara Kimbo. The two recorded an album together and performed and sold music on the streets of Taipei, donating most of the proceeds to those affected by the devastating Jiji earthquake of September 21, 1999.

Since 2008, Sangpuy has performed at major international events like the warm-up performance for the 2008 Beijing Olympics and the 2009 Deaflympics opening ceremony in Taipei, and a total of 13 performances of "Spring Riot" with Cloud Gate 2 in 2014 for their 15th anniversary, putting on brilliant and well-received performances in his mother tongue to audiences from all over the world.

In 2012, he established the Katatepan Cultural Studio, named for his family, and released his first full-length album in Pinuyumayan, "Dalan," followed by his sophomore album "Yaangad" in 2017, and "Pulu'em." in 2021

Sangpuy's music has an air of everyday life to it thanks to the inclusion of recordings of ordinary sound like the subway rattling, car horns on the street, the wind blowing past while you ride a scooter, and so on, all of which feed into his inspiration. During the process, while Sangpuy composes the music, he also consults with family elders when writing the lyrics. "If I’m going to make an album in my mother tongue, I should hold myself to a rigorous standard in how I present that language," he said.

He takes the music he writes in Pinuyumayan very seriously because these songs document the stories of Taiwan’s culture and times, and while they may not be as well-known as the popular songs, they are nonetheless important for the culture that underpins them. Sangpuy believes that tradition needs to be preserved and learned in order to enable one to shape one’s own life and culture, and that it is essential to the formation of one’s own unique worldview.

However, despite having won these awards, Sangpuy nevertheless considers them all secondary to his true passion, the music itself. He believes that Taiwan is awash with rich culture worthy of appreciation, and that through traveling the world, he can help continue to keep these millennia-old tunes alive and see them become part of the vocabulary with which Taiwan shares her culture with the world.