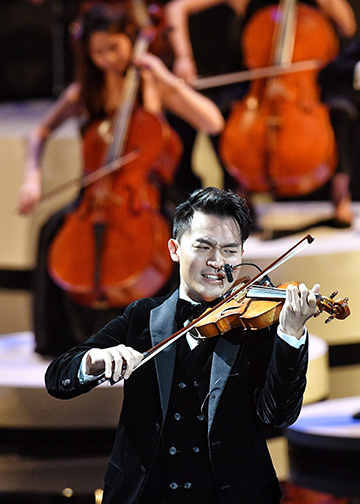 ‧ Chinese Name: 陳銳
‧ Year of Birth: 1989
‧ Place of Birth: Taipei, Taiwan
‧ Did You Know?
In 2012, Ray Chen became the youngest soloist to perform as part of the Nobel Prize televised concert for the laureates and the Swedish royal family. He has performed at Carnegie Hall with the Royal Stockholm Philharmonic and conductor Sakari Oramo and at the Wiener Musikverein with the Leipzig Gewandhaus Orchestra and Riccardo Chailly to sold-out houses and great acclaim.

Ray Chen was born in Taipei in 1989 and later emigrated to Australia with his parents. He began violin lessons at the age of four and completed all ten levels of the Suzuki Method in Queensland, Australia, by the age of eight. At the age of 15, Chen enrolled in The Curtis Institute of Music and had the honor to study under violin master Aaron Rosand. After winning the Yehudi Menuhin International Competition for Young Violinists and the Queen Elisabeth Competition in 2008 and 2009 respectively, he made the move to become a career musician. He only graduated from this prestigious school in 2010.

In 2012, he performed as the youngest soloist in the Nobel Prize televised concert for the laureates and the Swedish royal family. He has performed at Carnegie Hall with the Royal Stockholm Philharmonic and Sakari Oramo and at the Wiener Musikverein with the Leipzig Gewandhaus Orchestra and Riccardo Chailly to sold-out houses and great acclaim.

Ray Chen has released three critically acclaimed albums on Sony Classical. The first of these was a collection of Bach, Franck and Wieniawski pieces entitled "Virtuoso," while the second was a recording of Mendelssohn and Tchaikovsky Violin Concertos with conductor Daniel Harding and the Swedish Radio Symphony Orchestra. These two successful recordings saw him named "one to watch" by magazines The Strad and Gramophone. Among them, the outstanding "Virtuoso" also won the prestigious ECHO Klassik Award. His third album, “Mozart: Violin Concertos, K. 216 & 218; Violin Sonata, K. 305," was performed with conductor Christoph Eisenbach and the Schleswig-Holstein Musik Festival Orchestra and released in January 2014.

On Bastille Day in 2015, he joined Daniele Gatti and the Orchestre National de France for a televised concert on the Champs-de-Mars in Paris in front of an audience of over 800,000.

With so many eyes on him, the pressure is certainly not small; "I know there are many children who look up to me as a role model, so I can’t let them down." When Chen saw the children in the audience during the performance, he felt very honored. Although this was only one of hundreds of performances for him, he was also acutely aware that this may be the first time these children had come to a concert hall and that it may be a special day for them.

Ray Chen hopes to attract young people to classical music through social media and expand the audience of the genre, and so far, he has amassed more than two million followers on SoundCloud alone. In particular, his self-produced series of humorous and educational YouTube videos are proof of the effectiveness of this approach. He has even become the first ever classical musician to be invited to write a regular blog about his life as a touring soloist for the largest Italian publishing house, RCS Rizzoli. In his unstinting efforts to break down barriers between classical music, fashion, and pop culture, he is supported by Giorgio Armani and was recently featured in Vogue magazine.

Chen has said that classical music can be linked with the cultures of the world; "We take children to hear these pieces, these different styles of music, and it can be fun for them, like taking a trip around the world." Exposing children to classical music has always been something Chen has been passionate about, and in 2017 he visited Atayal College in Hsinchu to play for and share music with 100 indigenous children. "I remember having a lot of fun then, and it made me keep thinking about what else I could do."

Ray Chen has accumulated a vast fan base and is now even more certain that he has chosen the right path, and in the next five years, he intends to expand into even more areas of collaboration. Next year, for example, he plans to work on a film soundtrack and collaborate with a K-pop agency. "I'm not doing this to 'cross over,' and I’m not just doing this for myself; my most important role is still that of an ambassador for classical music," he says. From classical to modern, Ray Chen has never lost his way, but rather always kept an eye on the future while remembering his foundations, waiting for the right time to make another move to help classical music become trendy again.