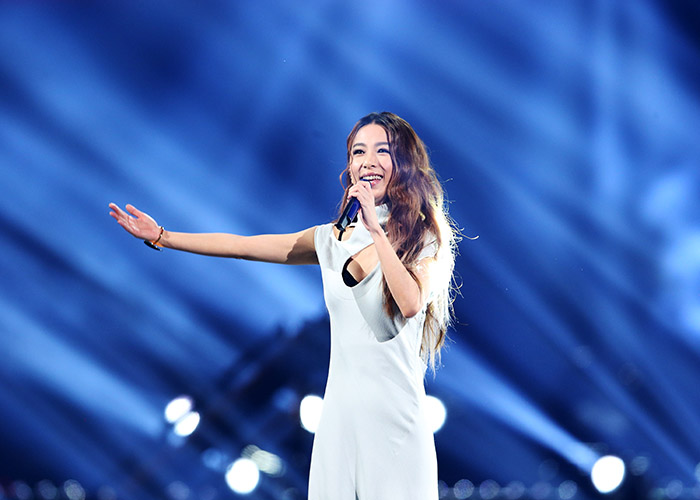 Chinese Name: 田馥甄
Date of Birth: March 30, 1983
Place of Birth: Hsinchu, Taiwan
Did You Know?
Hebe Tien is a Taiwanese singer, television host, and actor, as well as a member of the iconic girl group S.H.E. She released her first solo album in 2010, showcasing a fiercely unique musical style. Today she has numerous hits under her belt, including "A Little Happiness," which became the first Mandarin-language song to break 100 million views on YouTube. In 2020, Hebe Tien released her fifth solo album, entitled "Time Will Tell." The album saw her win the Best Female Mandarin Singer award at the 32nd Golden Melody Awards, finally truly securing her place among the top divas of contemporary Mandarin pop.

In 2000, Tien took part in a competition run by Grand Music International, the predecessor of what is now HIM International Music, to assemble a girl group. After a successful performance in that competition, she signed with the label that same year and became a member of the group S.H.E. alongside fellow contestants Selina Jen (任家萱) and Ella Chen (陳嘉樺). From then on, S.H.E went on to become one of the most iconic, influential, and well-known groups in the Chinese-speaking world, with both albums and concerts doing incredible numbers. The group made their debut in 2001 with the album "Girl's Dorm." That album also saw Tien try her hand at singing solo on the tracks "Too Much" and "Let Her Love You for Me." Critics also made particular note of her standout vocal work on S.H.E.'s seventh album, "Encore."

In 2010, S.H.E. went on hiatus, with the threesome embarking on solo ventures without formally disbanding the band. That September, Hebe Tien released her first solo album, "To Hebe." The songs featured in the album showcased a strong personal style, one which she has continued to build on since. The album was also nominated for four awards at the 22nd Golden Melody Awards. Tien also became the first Mandarin-language singer to have a music video surpassing 10 million views on YouTube with the videos for her songs "Still in Happiness" and "Leave Me Alone." Her second album, "My Love," was released two years later and was again nominated for the Golden Melody Awards, this time in seven categories including Best Female Mandarin Singer and Best Mandarin Album. Since then, Hebe Tien has continued to build her reputation as a vocalist, with her songs entering the pantheon of must-sing songs at karaoke establishments across Taiwan.

The third solo album, "Insignificance," came in 2013 and was also nominated for the 25th Golden Melody Awards in two categories. The album opens with Wisława Szymborska’s poem "Under One Small Star," putting this to use as a launching point for an exploration of the concept of impermanence, something which was further built on in her fourth album "Day by Day," which focuses on finding meaning in cherishing every moment. That album's tracks "Every Day is a Miracle" and "Love Yourself" were nominated for the Best Single Producer and Best Music Video awards at the 28th Golden Melody Awards respectively. Tien left HIM International Music in 2018 to start her own company, A Tune Music, the stated mission of which was to "do everything in the world of music and create beautiful songs, because why not?" In 2019, the company merged with the label Pourquoi Pas Music. In 2020, she released her fifth album, "Time Will Tell," the creative concept behind which was her personal feelings about the relationship between time and the motions of the universe. She has remarked that in making this album, she really had to confront the realities of life and learn what to let go of or not let go of. At the 32nd Golden Melody Awards, "Time Will Tell" won Best Songwriter, Best Album Producer, and Best Female Mandarin Singer.

Tien has many popular songs to her name, including "Still in Happiness," "You Better Not Think About Me," "Leave Me Alone," "Angel Devil," and "Untold." "A Little Happiness," was the theme song for the film "Our Days" and became the first Mandarin-language song to reach 100 million views on YouTube. In addition to her impressive resume as a singer, Hebe Tien has also worked in TV dramas, movies, voice acting, stage plays, music videos, variety shows, and product endorsements. Over the years, Tien has grown and transformed from a girl group idol to a vocalist with a singular style all her own. Music is a language, a means to communicate her mindset through her albums and present different facets of her personality to the public. At the same time, her songs resonate with listeners in a way that can help them find comfort and healing.