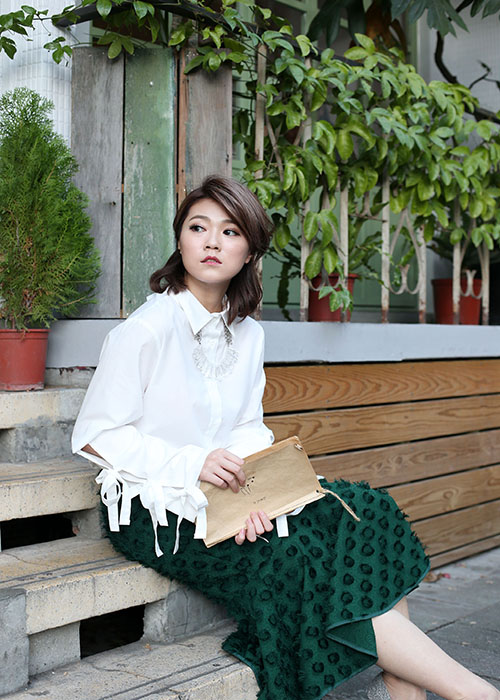 ‧ Chinese Name: 曹雅雯
‧ Date of Birth: November 30, 1986
‧ Place of Birth: Tainan, Taiwan
‧ Did You Know?
Olivia Tsao has been called "the next Jody Chiang." Taking up the mission of keeping the Taiwanese language alive in song by bringing it closer to the tastes of modern youth, she has created her own style of Taiwanese-language music characterized by a relaxed, modern musicality. She has been in the industry for a decade, and while her initial entry into the business was somewhat of a case of "going with the times," she has said that she originally wanted to be a writer. Over the years, she has written lyrics and composed music, thus, in a way, realizing that dream, but even more so, finding her calling as a singer.

Born in Tainan in 1986, Olivia Tsao is an only child. She has loved singing since young and she would often hum and sing to herself simply for her own amusement. Early on, she harbored dreams of becoming a singer, but she was raised in a traditional household where her mother believes that a child should study hard in order to have a bright future. It wasn’t until later that they struck a deal that she could sign up for a singing competition if she managed to rank in the top three in her class. Even though Tsao fell ill and lost the hearing in her right ear at the age of 10, she nonetheless continued to compete in singing competitions. Rather than hampering her, her loss of hearing drove her to focus more intently on the sound of her own voice and to be more attentive to her pitch. In 2009, she graduated from the Department of Translation and Interpretation Studies at Chang Jung Christian University and began to participate in singing competitions, winning the "Jody Chiang National Singing Competition" and making the podium in the Asian New Talent Competition. However, what brought her to wider public notice was her participation in the Formosa Television singing competition show "Super Star." After making it through 20 stages and becoming the first million-dollar winner, earning her the nickname of "million-dollar baby," Tsao released her debut single, marking her start on the path of being a professional singer.

This might all sound like it was easygoing, but behind the triumph were plenty of tears. After her debut, Tsao soon found that singing was not the only thing that mattered in show business. As part of the show, she had to coordinate with the crew and hosts as well, but she was so focused on singing well that she ended up seeming dull and boring. Work dried up for several months, she had to borrow money from friends to get by and spiraling into depression. With the support of her fans, she survived that downturn in her singing career and returned to her old passion of writing. In 2016, she reemerged with her fourth album, "Hope is the Thing with Feathers," which earned her first nomination as Best Female Taiwanese Singer in the Golden Melody Awards. The following year, Tsao was nominated again for the Golden Melody Awards with her album "A Song of Missing," this time winning the Best Female Taiwanese Singer Award and securing her status in the singing industry. After this, she began to be considered the successor to Jody Chiang as the iconic Taiwanese-language female singer.

As a student at CJCU, she had made French her second major and has even covered French songs, translating them into Taiwanese. Talking about the inspiration for her songwriting, Tsao once shared that she likes to observe passengers' movements while riding the Metro, using her observations as inspiration for her songs. She also wrote "Cowbell," a relaxed and casual song that made it into Apple Music's Top 100 Songs of 2020 in Taiwan and earned Tsao a reputation as a "soulful singer," overturning the image of Taiwanese-language songs as being sorrowful laments and attracting young fans. To attract the youth to Taiwanese, she also incorporates saxophone, guitar, and electronic rhythmic arrangements, while singing her lyrics with relaxing elements that young people enjoy.

In 2021, on her 10th anniversary in the industry, Tsao launched her own studio, Haowen Entertainment. Her latest album, produced under the studio, entitled "Original (自本)" is a bold stylistic exploration, showcasing a whole new face of Taiwanese-language songcraft. In addition to showing more refined singing skills, Tsao did the songwriting and production for almost the entire album herself, as well as learning arranging, recording engineering, and various other related skills. As the title would imply, she aimed to present her most original, essential self through the album. "Original" was nominated for eight awards at the 32nd Golden Melody Awards, ultimately winning Best Female Taiwanese Singer, Best Taiwanese Album, and Best Music Arrangement. As both producer and vocalist, Olivia Tsao won the Best Female Taiwanese Singer Award for the second time since 2017 with this newest album.