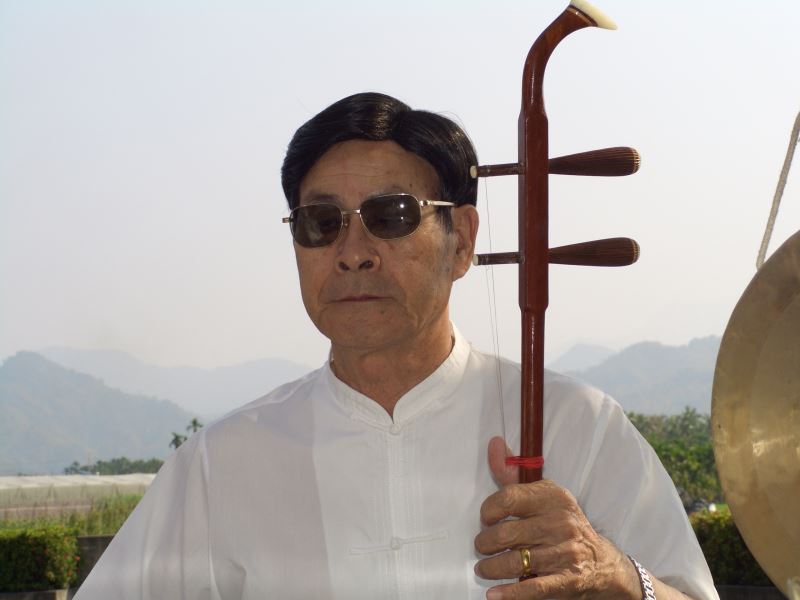 Chinese Name: 鍾彩祥
Year of Birth: 1938
Date of Death: January 7, 2022
Place of Birth: Kaohsiung, Taiwan
Did You Know?
Master of the traditional bayin (eight notes) style of Hakka music, Chung Tsai-hsiang was the leader of the Meinong Hakka Bayin Music troupe and is considered a human encyclopedia of the traditional Hakka bayin music of Meinong. He had also studied Western musical instrumentation, and as such could read and write musical scores, contributing much to the ongoing preservation of this traditional form of music.

Chung Tsai-hsiang was born into a family with meager means and left formal education when he was just 14 years of age. Around a year after leaving school, at the age of 15, he learned Hakka bayin (eight notes) music and traditional instruments such as the huxian, erxian, suona, and percussion from a master. Chung's master was blind, and he used onomatopoeic indicators of pitch and rhythm to teach pieces to his students. "I didn't learn traditional notation before," said Chung, "so instead I just had to remember everything by singing it."

Chung Tsai-hsiang learned to play string instruments at the age of 16, setting down a foundation in the erhu. However, he also developed an interest in percussion music, and so he chose to focus on both percussion and strings. After studying for almost a full year, he began to perform alongside a master. At that time, he was part of a group consisting of five members—Chung Yun-hui (鍾雲輝) was in charge of the suona, Chung Tsai-hsiang and Li Lai-tian (李來添) were on erxian, Huang Jun-ching (黃君清) handled percussion, and Tseng Mu-sen (曾木森) played huxian. In 1958, Chung began studying drumming under po-te-hi puppetry master Shu Dezai (樹德仔) of also learned the drum world from the master of the puppet troupe Shu Dezai of Taishan in Pingtung County, taking his skills to a higher level.

During his military service, Chung was assigned to the art team. As the band did not play bayin music, he switched to Western music, learning to play the saxophone. He would later put this familiarity with both Chinese and Western music to play the erxian and tenor saxophone at all kinds of events, from weddings to funerals. In addition, because the Hakka bayin music of southern Taiwan has no written records or musical scores, Chung’s familiarity with Western notation and ability to read and write sheet music was a vital contribution to the recording and preservation of the art.

In 2005, the Chung Yun-hui Baying Ensemble (led by Chung Yun-hui with Chung Tsai-hsiang, Li Laitian and Wu Qinchang) was invited by the Musée du Monde France to give a bayin performance for the French Festival d’Imaginaire. Chung Tsai-hsiang was responsible for the erhu and the overall repertoire. The following year, they were invited to Geneva and Zurich in Switzerland to perform at the Taiwanese Arts Festival.

From 2006, Chung Tsai-hsiang was highly praised by audiences for his work as head of the Meinong Hakka Bayin Music troupe. Under his leadership, the troupe was invited by the Council for Cultural Affairs/Ministry of Culture to perform in various art and culture events and festivals both at home and abroad. In addition to having nearly 60 years of experience in Hakka bayin performance, Chung was also a major contributor to the education and promotion of the art form, helping keep this precious Hakka cultural asset alive and being passed on to later generations. From 2006, Chung was an instructor of a Hakka bayin class at Fu’an Elementary School, and from 2012, an instructor for the Zhubei Hakka Bayin Ensemble.

In 2013, Chung was honored with the Global Chinese Culture and Arts Award, and in 2015, the Council of Hakka Affairs awarded him the Hakka Contribution Award. The Meinong Hakka Bayin Music troupe was recognized by the Ministry of Culture in 2006 as a preserver of the important traditional performing art of Hakka bayin music.

On January 7, 2022, Chung Tsai-hsiang passed away at the age of 85. The Ministry of Culture has petitioned the President to posthumously honor Chung with a Presidential Citation. Minister of Culture Lee Yung-te remarked that Chung Tsai-hsiang devoted his life to the preservation and passing on of Hakka music in Taiwan and that his life history could be considered to represent a microcosm of Hakka music in the Meinong area. With his wealth of experience and knowledge, as well as his familiarity with the rites and rituals of the Hakka people, Chung was an extremely important leader in Taiwanese traditional music and in the history of Hakka bayin music in Taiwan. The Ministry of Culture is committed to upholding his spirit and continuing to work on preserving and passing on such traditional performing arts.