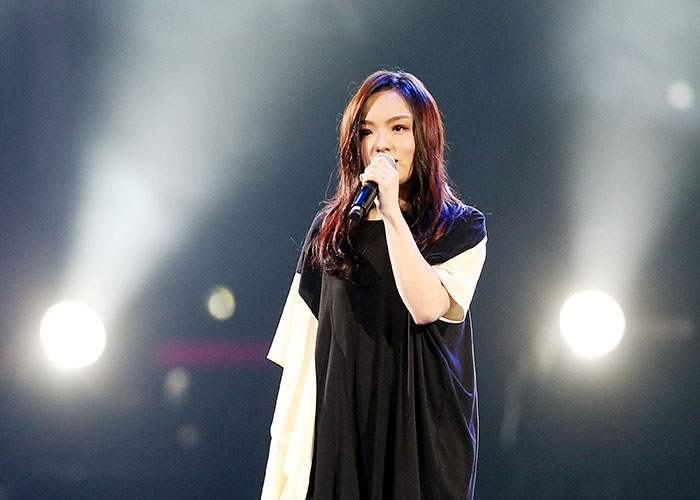 ‧Chinese Name:徐佳瑩
‧Date of Birth: December 20, 1984
‧Place of Birth: Hualien County (Eastern Taiwan)
‧Did You Know?
Lala Hsu first went to Taipei when she was 24 years old to take part in an audition for a singing talent show. After seeing the other amazing contestants backstage, she was so scared that she decided to give up on the competition and bought her bus ticket home. As she was getting ready to get on the bus to her home in Taichung, the producer of the show called her, asking her to come back to the competition because otherwise, it would be a big hassle, so she rushed back to the auditions.

Lala Hsu graduated from Central Taiwan University of Science and Technology with a bachelor’s degree in nursing, but she long had a strong passion for music, even winning second place in the school singing competition and serving as a percussionist and conductor for the Wind Ensemble during her college years. Not wanting to give up on her dream of getting into music, she quit her job as a nurse in 2008 and secretly signed up for the auditions for the third season of the singing talent show “One Million Star” without her family’s knowledge. At first, her family was resistant to her decision to pursue her dream of being a singer, but in the end, she proved herself by winning the competition and getting her parents on-side with her goal. For Hsu, that competition was the first decisive moment in her musical career.

Lala Hsu’s songs are characterized by their unique, refined narrative lyrics, often incorporating elements of Taiwanese koa-a-hi opera into them to create a feeling that is at once familiar, yet novel. In 2009, she debuted with her self-titled full-length album, firmly securing her image as a talented ingenue in the hearts and minds of the public. With this album, she quickly became a representative of a new generation of Taiwanese pop singers. Her debut album featured a number of pieces of her own composition, including the well-known "Riding a White Horse (身騎白馬)," a song built around the main chorus of the song "I'm Riding a White Horse," an iconic piece from the koa-a-hi opera "Xue Pinggui and Wang Baochuan (薛平貴與王寶釧)."

During the singing competition, Hsu used the song "Riding a White Horse," a collaboration with avant-garde music composer Gideon Su and opera singer Kuo Chun-mei, as her entry song. She added Mandarin lyrics and rearranged the song into a whole new interpretation of the classic, receiving rave reviews from the program's panel of judges. Little could she have imagined that a little over a decade later, she would be featured on a similar singing talent show, "Jungle Voice 3," this time as a mentor to two singers of their own new generation who would adapt her hit song, incorporating R&B, hip-hop, and Taiwanese indigenous music, further transforming "Riding a White Horse" from its roots in traditional opera into a modern Mandarin pop classic.

In 2014, Hsu released her sophomore album "Missing (尋人啟事)," which was nominated for the 26th Golden Melody Awards. The album's eponymous single soon became a deep favorite with listeners for its pure melody, sincere and simple lyrics, and Hsu's own gentle, yet deep voice.

In 2016, Hsu decided to challenge herself by taking part in the Hunan TV singing show "I Am a Singer 4" in China, where she won the first episode, impressing Chinese audiences who were not yet familiar with her. Although she was eliminated in the final round, her brilliant singing helped her gain popularity in China and she has been invited to sing the theme songs for several dramas and movies since the competition.

In 2018, Hsu won the 29th Golden Melody Awards for Best Female Mandarin Artist and Best Mandarin Album with her album "The Inner Me (心裡學)." In addition to her usual gentle, warm take on rock, this album also incorporated a touch of trip-hop and disco-funk, adding new richness and depth to the album. In 2022, she released her latest album "Gei (給)," winning the Producer of the Year, Single award at the 33rd Golden Melody Awards for her song "None of the Above (以上皆非)."

In an interview, Hsu remarked that no matter how complicated things get, in the end, she will always return to the simplicity she finds in music. The more she tries new things, the more she will understand what it is that she wants. She feels that the happiest moment of making music is when someone is willing to listen to and let themselves be touched by her music. "I hope those songs that can heal me can also heal everyone else’s hearts," she says.