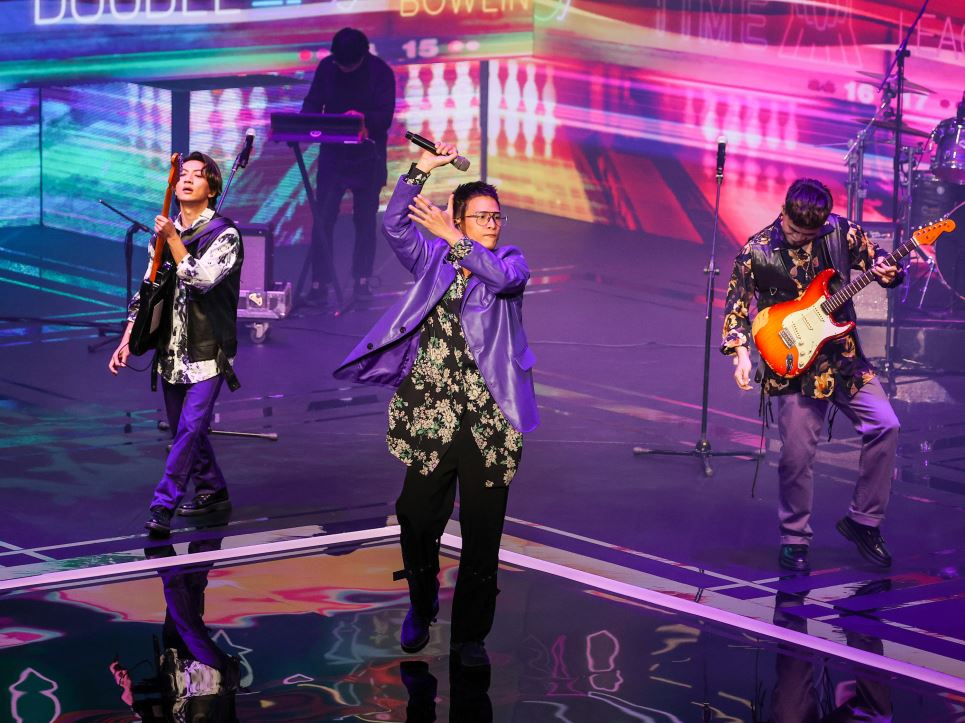 Chinese Name: 茄子蛋
Formed: 2012
Founder: Ng Ki-pin
Did You Know?
Director Yin Chen-hao (殷振豪) and his team tell the tales of the little people through the language of the camera and produced the music video trilogy that made EggPlantEgg popular, namely the videos for the singles "Back Here Again (浪子回頭)," "Waves Wandering (浪流連)," and "All That Wishful Thinking (這款自作多情)," cleverly weaving an interconnected story across all three.

Independent Taiwanese band EggPlantEgg was formed in 2012, by lead singer and keyboardist Ng Ki-pin (黃奇斌) when he was studying Advertising at National Chengchi University. The members originally came from his friends from the Popular Music Club when he was studying in Songshan High School, but the members left one after another to pursue their respective career plans, leaving him the only founding member remaining. In 2014, EggplantEgg reformed, with current guitarists Tsai Kai-jen (蔡鎧任) and Ader Hsieh (謝耀徳) and drummer Lai Chun-ting (賴俊廷, who left the group in 2019) joining.

After their comeback in 2015, EggplantEgg decided to pull together their various songs and record the results of their several years into an album. In order to have more time to create, the members of the band could only work part-time, making less than NT$10,000 a month, and they still had to raise money for recording. When they were at their poorest, the four lads had to share a single piece of toast, thinking to themselves, "OK, just push through it and get the album out soon." After more than a year, they finally released their debut album "Cartoon Character (卡通人物)" in June 2017. Even though the members of the group had been promoting it on the Internet for a while, they’d barely gotten any response.

Then, to their surprise, the single "Back Here Again” from the album became a Taiwanese-language pop hit that reached across generations. Since the music video premiered in 2017, it has accumulated more than 100 million views on YouTube, and even become hugely popular in China and Southeast Asian Chinese communities. The band quickly became popular on the back of this single, and even sparked interest among a number of music lovers abroad in Taiwanese-language songs.

Although the title of the album cover of "Cartoon Character" is funny and playful, featuring a cute cartoon eggplant in the middle of a bright cartoon scene, the whole album itself filled with songs of melancholy and self-doubt, the tracks coming together to form a jigsaw puzzle that shows how the group had felt misunderstood during previous six or seven years and that they had to desperately try to prove themselves. In addition to winning the Best Taiwanese Album Award at the 29th Golden Melody Awards, the album also won EggplantEgg the Best New Performer Award that year.

In 2019, the band went on to release their sophomore effort, "We Are Gonna Get Married (我們以後要結婚)," with the music video for Taiwanese-language single "Waves Wandering" once again racking up over 100 million views on YouTube. Sung from a masculine perspective, the song sings a love story of ordinary people at the bottom of society, something which resonated with a number of their adult male listeners. The song was nominated for the Song of the Year Award at the 30th Golden Melody Awards.

In 2022, EggplantEgg won again at the 33rd Golden Melody Awards with the song “Oh Love, You Are Much Greater Than I Imagined (愛情你比我想的閣較偉大)," the theme song for the movie "Man In Love (當男人戀愛時)," earning them the Song of the Year Award. The melody of this song is reminiscent of the electronic dance music style of the 1990s, with a fast-paced arrangement and pounding beat, echoing the vehemence of the protagonist’s love in the movie.

Most of EggplantEgg's songs are composed by lead singer Ng Ki-pin, and mainly in Taiwanese. Writing songs in Taiwanese is something that has great meaning to the band. The Taiwanese language is a treasure to them, something that lets them convey their ideas and communicate with fans in a way that connects most directly. The band’s tracks tend to be in classic rock and blues influenced styles. Ng has mentioned that his musical tastes have been deeply influenced by the British psychedelic rock band Pink Floyd and Taiwan’s classic 90s rocker Wu Bai (伍佰). EggplantEgg’s music has successfully created a niche for what could be called "modern classics," giving Taiwanese songs a chance to gradually secure a place in the new generation of pop music.