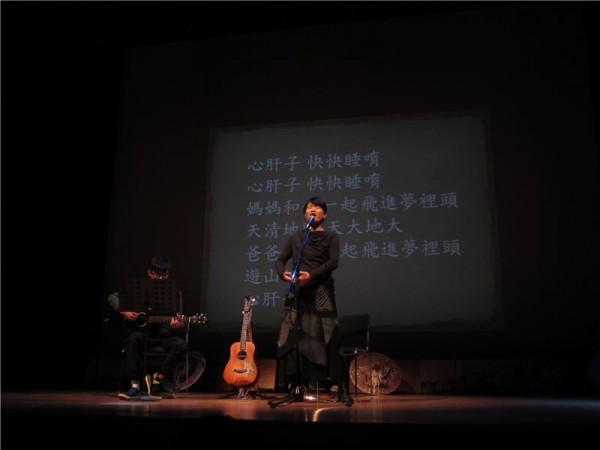 Lo Sirong is a singer-songwriter who adapts music from original poems written in Hakka, Chinese, and Taiwanese languages. As mother of one beloved daughter, she also sings about motherhood, womanhood, and different aspects of female life. For re-popularizing Hakka music, Lo was named the 2011 Golden Melody Best Hakka Singer.

Though Lo was born in a Hakka family, she didn't know much about Hakka culture and traditions until 2002, when she started organizing poems written by her father Lo Lang (羅浪). Lo got to know her father and Hakka culture again, which inspired her to sing her first song based on his poems.

Reading her father's poems made Lo realize that she has yet to understand her own cultural roots and mother tongue. Thus, Lo started to listen to Hakka folk songs and discovered the culture and stories within. The traditional tunes of the Hakka people also became Lo's new source of musical inspiration.

In 2007, Lo released "Everyday (每日),” an album four years in the making, in which she sings about how a woman tries to break free from the constraints imposed by traditional society in everyday life. For her expressive insights on society, culture, environment, and human nature from a female perspective, the album was recommended by British folk & root music guide fRoots.

Three years later, Lo made a new album titled "More Than One (多一個).” Different from her previous albums that focus on her own life stories, "More Than One” features twelve songs based on original works written by contemporary female poets in Taiwan. Lo brings modern poetry to life by transforming poems into songs. The album is praised by poet Hong Hong (鴻鴻) as a "music feast” and a "treasure of Taiwan literature.”

From the role of a wife and a mother to a singer-songwriter, Lo has connected different areas of her life with her poems and music to tell lives, memories, traditions, and insights from a woman's point of view through her poetic and lyrical works.