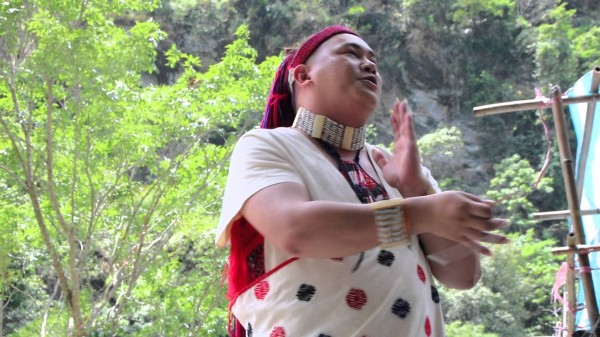 Dondon Houmwm is a musician, performer, and artist from the indigenous tribe of Truku. To help revive the disappearing Truku culture, customs, and language, Houmwm presents contemporary aboriginal culture through music and performance art. For his initiative, he won the first prize in the 2014 Pulima Art Awards.

When Houmwm was a student, he used to be a trainee at the Formosa Aboriginal Singing and Dance Troupe (原舞者). After finishing high school, he joined U-Theatre (優人神鼓) to learn drumming and meditation and toured with the group. He then received artist-in-residence subsidies for two consecutive years to sustain his art creation.

With the belief that culture and art is the accumulation of ancestral life and collective experience, Houmwm returned to his hometown Dowmung tribe in 2009 to learn about the history, story, and mythology of his ancestors and their land, which all became his sources of inspiration.

Houmwm presents aboriginal culture by incorporating traditional instruments such as mouth harp with contemporary music. To share more stories of Taiwan's aboriginal people, Houmwm founded the "Eiug Art Creation Group (兒路藝術創作工寮),” in which "Eiug” means "road” in the Truku language, to express his hope of tracing and passing down aboriginal heritage and tradition.

Houmwm leads the group members, who are mainly university students, back to their tribes to reconnect with their roots and mythology by playing traditional instruments, singing folk songs, and dancing. In 2015, the group was selected to join an art festival held in Japan for cultural exchanges.

While performing with his group, Houmwm also produced "The Sound of Batuolan (巴托嵐之音),” an album that features the Truku language. Incorporating traditional Truku instruments and folklore in his music, Houmwm aims to raise awareness of the connection between mankind and land despite the urbanization of tribal life.

Though aboriginal culture and art were suppressed from the Japanese colonial era to the 1990s in Taiwan, Houmwm has infused Truku traditions with modern ideas to continue the story of Truku tribe. He now serves as a driving force in preserving and reviving the dwindling aboriginal culture and language through music and performance art.