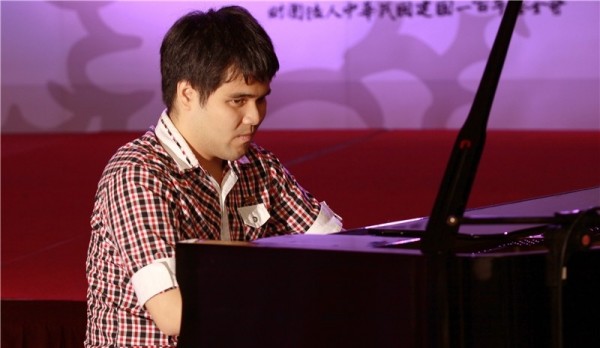 Huang Yu-siang is a versatile composer whose music has appeared both live and on screen. Huang also participates in TV dramas and films as an actor, and was named the Outstanding Taiwanese Film Professional of the Year by the prestigious 2012 Golden Horse Awards for the film "Touch of the Light (逆光飛翔).”

Although he suffered from a degenerative eye disease since birth, Huang's talent in music was discovered when he was about three years old. Since then, Huang started to play the piano and eventually enrolled at the National Taiwan University of Arts to study music.

Huang has served as a pianist for Taiwanese bands such as the Black Eyeglasses (黑墨鏡樂團) and Baba Band (爸爸辦桌樂團) and as a composer for several film projects, including the music for "My Football Summer (奇蹟的夏天)” and "Young at Heart: Grandma Cheerleaders (青春啦啦隊)” directed by veteran documentary maker Yang Li-chou (楊力州).

In 2005, when Huang received the Presidential Education Award in a public ceremony, noted director Chang Jung-chi (張榮吉) was deeply impressed by him and decided to make several documentaries to tell Huang's story. The director then produced "Prelude (序曲)” and "The End of the Tunnel (天黑),” which both received positive reviews.

In 2012, Chang decided to make a full feature film called "Touch of the Light,” in which Huang plays his younger self. The movie depicts the friendship between a blind music student and a girl who wants to become a professional dancer, and how they tackled difficulties in life to pursue their dreams.

"Touch of the Light” was shortlisted by the Busan International Film Festival, Taipei Film Festival, Hong Kong Film Awards, and Chinese Film Media Awards. It was also selected as Taiwan's entry for the Academy Award for Best Foreign Language Film that year.

In 2015, Huang released his debut album "Be All Ears (聽見黃裕翔)” and was recognized as Best Instrumental Composer by the 27th Golden Melody Awards for the fourth track on the album, "The Journey (高鐵小旅行).”

Huang once said: "Sounds [of music] allow me to feel the colors of the world.” Huang copes with visual impairment with a positive attitude and surpasses difficult times through music. Having performed in Taiwan, the United Kingdom, and Japan, Huang hopes to use his music to inspire and console people.