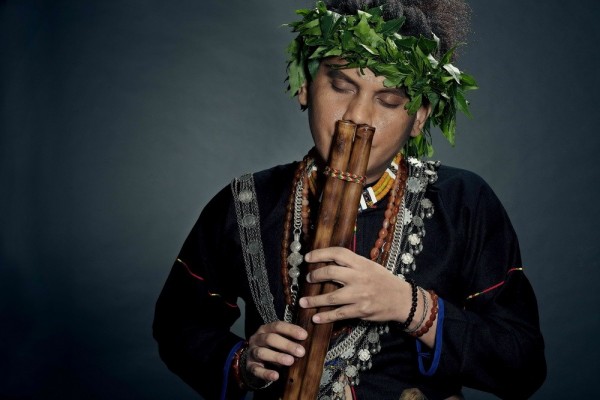 Sangpuy is a Beinan musician who sings of life, nature, and aboriginal identity with his powerful and penetrating voice. His music has the ability to help people reconnect with one’s land, which is spiritually and culturally revered in Taiwan’s indigenous cultures. This talent garnered him the Best Aboriginal Vocalist title at the 24th Golden Melody Awards with debut album “Dalan.”

Born and raised in the Katatipul community of Taitung, Sangpuy was well versed in his mother tongue, ancient tunes, and traditional songs from being taught by the tribe’s elders during childhood. The time he spent with elders from an early age enabled him to cultivate singing skills and in-depth knowledge of Beinan culture and history.

Sangpuy’s music journey began in 1999 when his singing talent was discovered by composer Chen Chu-hui (陳主惠) at a fundraising event. Chen, a member of the indigenous music group Feijuyuenbao Synectics (飛魚雲豹), invited Sangpuy to join them in collecting and singing tunes from different aboriginal tribes.

Seeing music as way to raise awareness and promote aboriginal cultures, Sangpuy performed with the group in music festivals, aboriginal communities, and overseas events. The public’s positive response supported Sangpuy on continuing on his music path, and inspired him to make his own music later on.

In 2014, Sangpuy released his debut album “Dalan” covering seven traditional tunes and seven new compositions. The album reflects on the relations between the aboriginal people and ancient spirits, and explores the human connection in today’s tribes.

Integrating elements of indigenous instruments, classical music, and traditional ballads, “Dalan” has brought timeless tribal tunes to urban cities, breaking the barriers of space and language with its transcendent quality.

To Sangpuy, the album reflects his intentions of preserving and recording traditional Beinan tunes, as well as giving back and expressing his gratitude to the tribes from whom he acquired the traditional songs. He hopes that listeners will feel the harmony between people and nature through the music.

Sangpuy returned with his second album “Yaangad” in 2016 to praise life, nature, land, people, and the universe. The sentimental mother-tongue album once again performed spectacularly, winning Album of the Year and Best Aboriginal Vocalist at the 28th Golden Melody Awards in June 2017.