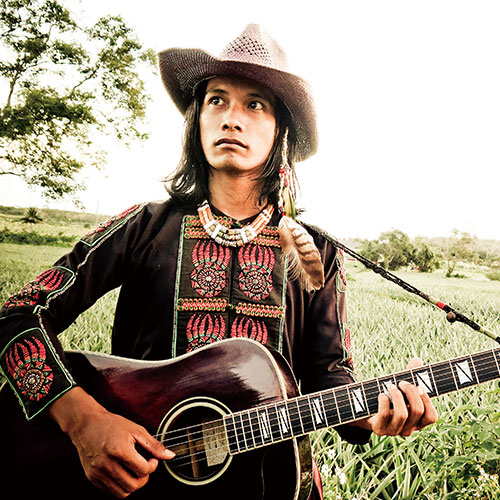 Balai is a singer-songwriter who sings about Paiwan culture and history as well as the identity of younger indigenous generations. His mature and pure voice, which incorporates music with the oral history and ancient memories of Paiwan elders, has earned him several accolades from the Golden Indie Music Awards and the Golden Melody Awards.

Growing up in the southern city of Kaohsiung, Balai was not familiar with aboriginal music and culture. Instead, he only listened to western music and played the guitar in a rock band that he formed with friends when he was a student.

Balai began to look into his Paiwan ancestry during university after meeting his Japanese wife Aki Murata, who was interested in Taiwan’s aboriginal cultures. Since then, they often visited different Paiwan tribes together to learn about Paiwan culture and tradition.

Though Balai cannot speak Paiwan to the elders, Aki, however, is able to communicate with them in Japanese as many elders had learned the language during the Japanese colonial era. In 2008, Balai wrote his first song with aboriginal lyrics with the help of Aki.

Balai then met other aboriginal musicians such as Suming (舒米恩), Panai Kusui (巴奈), and Ara Kimbo (胡德夫), who introduced him to traditional aboriginal ballads and inspired him to engage in recomposing Paiwan ballads to preserve the beauty of his own culture.

And it was with such innovative re-composition that Balai won the top prize at the 2012 Taiwan Music Composition and Songwriting Contest, which helped him move forward with his music career.

After several years of hard work, Balai released his debut album “The Modern Ancient (古老的透明)” in 2015, telling his life experiences, thoughts on the land, and struggles in the past nine years through 10 tracks of different music styles.

After releasing the album, Balai relocated to an Amis community in Taitung to search for inspiration for his next project by experiencing a more traditional way of life. He also opened a guitar class with Panai at a local village to encourage people to express their ideas and voices through playing music and writing lyrics.