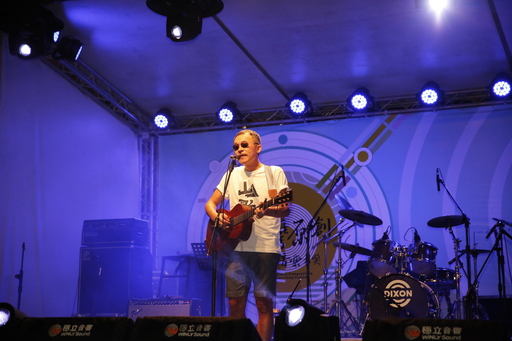 As a music producer and singer-songwriter, the works of Ayugo Huang are unlike traditional Hakka folk music. Building on a foundation of blues, he adds layers of folk music, rock, reggae, and jazz, creating works of greater depth and emotional power. Melded further with new age elements, Huang's music presents a new and enticing side of Hakka heritage. Through his works, Huang has won several Golden Melody Awards for Best Hakka Album and Best Hakka Singer.

In 1992, Huang and Bobby Chen, each talented musicians in their own right, formed the New Formosa Band. Their combination of Hakka and Taiwanese styles brought them great attention in the world of Taiwanese popular culture and helped Hakka music break into the mainstream market. Over the years, the band played over 300 concerts around Taiwan and earned a number of Golden Melody Awards nominations.

However, the workload meant that Huang found himself unable to focus on writing his own Hakka music, and so in 1997 he left the band and stepped away from the limelight. After nearly a decade's silence, he returned in 2007, his creative forces replenished, with a new solo album of Hakka-language songs entitled "Banana," released with the assistance of the Hakka Affairs Council. The album not only earned Huang the Best Hakka Album and Best Hakka Singer awards at the 19th Golden Melody Awards, but was also named among the Top 10 Albums of 2007 by the Association of Music Workers in Taiwan.

In 2013, Huang set out on a tour to perform in Hakka villages around Taiwan, with a backpack emblazoned with the characters for "mountain song" on his back. He then spent two years traveling China to collect information on Hakka culture there, ultimately using what he learned in this process of getting back to his roots to power his fourth solo album, "The Path of Mountain Song." His fusion of traditional mountain song with blues elements has been well received for its relatability, striking a particular chord with the younger generation. This album, too, saw Huang receive the Golden Melody Award for Best Hakka Album.

These days, Huang is dedicated to the work of keeping Hakka mountain song alive and preserving the original flavor of Hakka music, while also working to craft a refined, modern take on it. Grounded in Hakka culture, Huang has a deep familiarity with the sound of Hakka music, and his keen ear for music and language has fostered a facility for crafting songs in Mandarin Chinese, Taiwanese, and Hakka alike. A major force in the promotion of Hakka music, Huang hopes to help preserve Hakka language and culture and, through music, help more people get to know this unique heritage so at risk of disappearing.