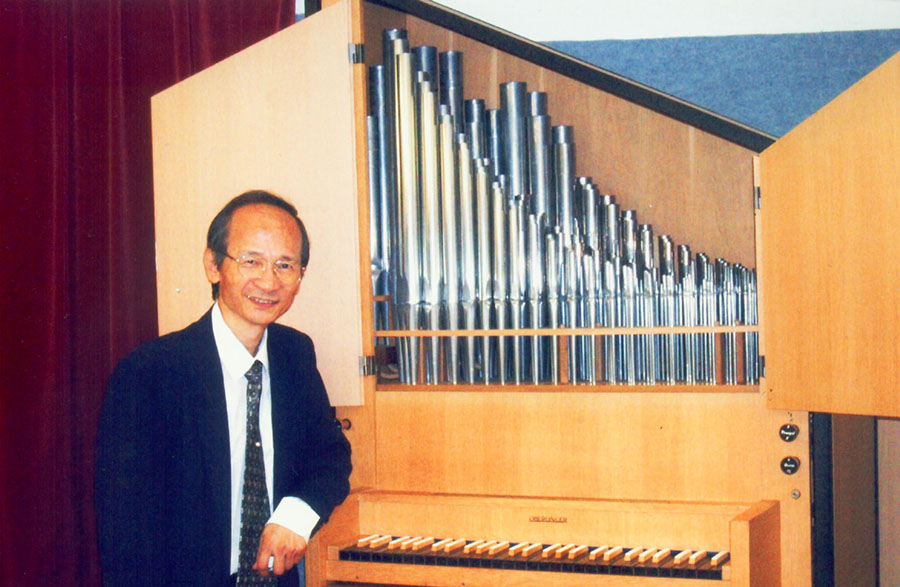 Chen Mao-sheng was born in Hsinchu City in 1942. Influenced by his mother, a devout Christian, he grew up with the music of the church. As a child, he taught himself piano, and in 1964, he had the opportunity to visit Tainan Theological College and Seminary, where he gained permission to play the organ. It was then that he made up his mind to travel abroad and study the organ.

Six years later, in the spring of 1970, he left for the United States, and in 1973 he graduated from Asbury Theological Seminary in Kentucky with a master's degree in religious art, having majored in the organ. In 1975, he graduated with another master's degree, this time in church music from the Southern Baptist Theological Seminary, and began conducting choirs. The following year, he returned to Taiwan at the invitation of the Taiwan Theological College and Seminary in Taipei to take on a teaching position. Ever since, he has been an inextricable part of church music in Taiwan, particularly the development of organ music here.

Given the significant role played by the organ in church music, in addition to teaching, Chen has also put on frequent demonstrations and trained a number of organists in the church, cultivating a new generation of musicians. He has also worked to bring this massive instrument into Taiwan, helping boost the number from just three nationwide in 1976 to 30 by 2005. Having introduced organs of all sizes, ages, styles, and number of pipes to Taiwan, he could truly be said to have been the biggest proponent of the pipe organ in Taiwan over those three decades.

His contributions to choral and sacred music, too, can hardly be overstated. In addition to his role on the Music Committee of the General Assembly of the Presbyterian Church in Taiwan from 1977 to 2005, Chen has also been tremendously active in the translation of church music from around the world into Taiwanese and Mandarin. He has had over 120 collections of choral music published, providing an important resource for Christian groups throughout Taiwan and the overseas Mandarin-speaking community.

While the organ may be a complicated, expensive instrument and its promotion still largely focused around the church, Chen was still able to make a significant contribution through his tireless efforts in promoting this majestic instrument to the wider public through his teaching, playing, writing of books, and releasing of CDs.