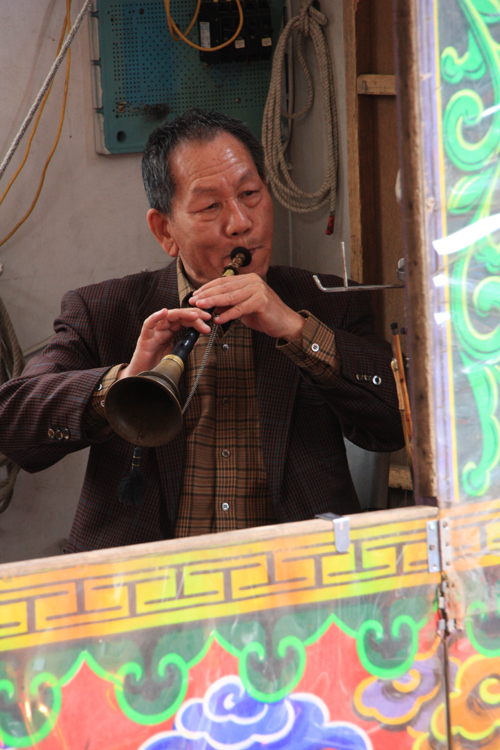 Lin Zhu-an has dedicated his life to performing string music for Taiwanese opera, or koa-a-hi. He has been a witness to much of the modern evolution of the form, from its early days in indoor stages through album sales, radio plays, outdoor performances, and theater halls. In 2018, the Ministry of Culture named him a "living national treasure" and a preserver of the important traditional performing art of koa-a-hi string music.

Lin may have got his start in Nanguan, but he has since familiarized himself with a variety of other forms, including koa-a-hi, Hakka opera, Peking opera, and po-te-hi puppet theater. His performance skills are exquisite, and since joining the theater world, he has expanded into a variety of string and wind instruments, with a particular specialization in the stringed tua-kong-hian (大廣弦) and khak-a-hian (殼仔弦). He has also taken on Western musical instruments, along with incorporating elements of Hakka tea-picking songs and Beiguan music, to create a richer form of koa-a-hi.

In 1970, at the age of 34, Lin founded the Minchuan Gezaixi Opera Troupe (民權歌劇團). Under his professional management, the troupe quickly grew in prominence, becoming one of the most popular outdoor performance troupes in the greater Taipei area. Over time, though, changes in the overall environment saw the troupe slowly start to decline, and for a period they stopped operations, restarting again only in 1991. In 2006, Lin turned over leadership of the troupe to his third son, Lin Jin-quan (>林金泉), and they began moving their focus from traditional folk temple festivals to government- or civic-sponsored campus or community tours, along with performances at Taipei’s National Theater and other major venues.

As a child, Lin received a Japanese education, and as part of that, he has always believed that a man should present a cultured and cultivated style. As a result, he has made wearing a Western-style suit a personal trademark since his youth, cutting a distinctive figure among the glitz of koa-a-hi. He is not a casual person, and nor does he expect casual treatment. "Koa-a-hi also has its own character and its own attitude," he says, in reference to a belief he is as committed to as he is to his suit-clad stage performances.