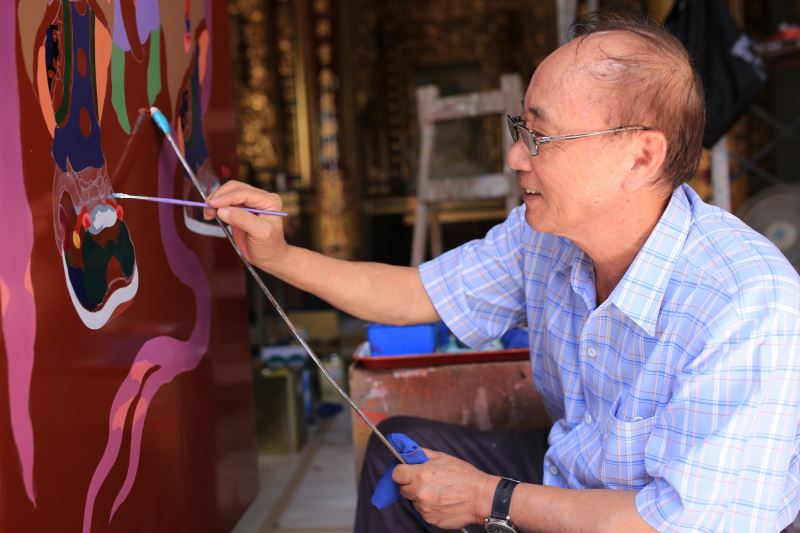 Hung Ping-shun's superlative achievements in traditional architectural painting recently saw him named a "national living treasure," one of the highest honors the Ministry of Culture can bestow on an individual. He has dedicated over half a century to painting, accumulating an impressive store of knowledge and skills in the field of traditional architectural painting, as well as the ability to lead projects on temple painting. Traditional temples are full of paintings, from the "door gods" and temple walls to the pillars and the backdrops of the statues of deities. These works not only bring traditional culture and history to life, but also reflect the distinctive folk traditions and regional cultures of Taiwan.

From a young age, Hung had a love of painting. As a young man, he apprenticed as a billboard painter for the Yuandong Theater (遠東戲院) in Chiayi. Later he moved on to study oil painting under movie poster painter Hsieh Tsong-hsing (謝聰興), painting not only film billboards, but also backdrops for po-te-hi puppet theater. After completing his national military service, Hung returned to his hometown and began working under commission from the Farnshuu Shun Tian Temple (蕃薯厝順天宫), marking the start of his career in temple painting.

Since 1988, Hung has taken on a succession of temple painting projects. With the Taiwanese economy taking off and temple renovation booming, his works slowly spread across the island, from Xingang Fengtian Temple (新港奉天宮) and Beigang Wude Temple (北港武德宮) in Chiayi to Dajia Zhenlan Temple (大甲鎮瀾宮) in Taichung and Sanchong Tianhou Temple (三重天后宮) in New Taipei City. His works can even be found at Fukuju-in Temple in Hakone, Japan. Over the past five decades, Hung has painted some 200-plus temples, helping ensure this traditional craft stays alive.

Hung’s works are characterized by rigorous composition and vivid, exquisite brushwork, but he was never formally trained in temple painting, instead learning solely from observing the older generation of painters. In his 50s and 60s, looking to challenge himself and expand beyond the familiar temple painting, he began to study the concepts, composition, and colors of Western painting, incorporating this into his own work, escaping the formulaic rigidity of the traditional style and giving a new look and spirit to this folk art.

Hung has played a crucial role in traditional architectural painting in Taiwan. He has given his all to temple painting as an art form, and as part of his efforts to promote its development, he founded the Taiwan Temple Painting Art Society (台灣寺廟彩繪藝術畫會) in 1997. Since 2001, at the invitation of the Tainan City Cultural Affairs Bureau, he also serves as a traditional painting teacher to students at Jianye High School and Kunshan Senior High School, passing on his knowledge and skills to the next generation. Already some of his students have gone on to their own paths, cultivating yet another new crop of talented heritage restorers.