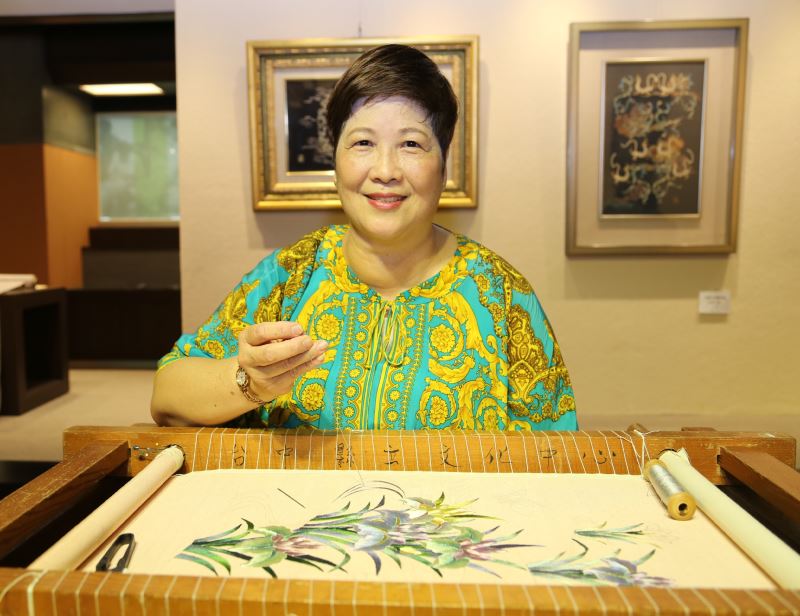 Stitch by stitch, Liu Chien-shao manages to capture each detail in a flourish of thread and color. With more than 40 years of experience, the Taichung-born embroidery expert never ceases to amaze heritage experts and members of the general public with her striking creations in the centuries-old art form.

However, embroidering was not her original choice of profession; it was a compromise she made at the age of 17 when her family was under financial stress. Little did she know, back then, she would stitch her way into Taiwanese art history and be bestowed the title of "National Living Treasure" for her preservation efforts in 2020.

Liu has developed a deep familiarity with embroidery by mastering the abilities to reflect the culture, skills, and knowledge inherent to the art form. While the threads and patterns that she use mirror contemporary culture, her gorgeous embroidery art on room dividers, drapes and curtains, and kimono belts capture various aspects of day-to-day life in Taiwan.

After years of designing and producing embroideries that were used for decorating kimono belts, Liu’s boundless enthusiasm for the art form led her to switch focus to re-energizing the traditional craft. In 1995, she began to participate in educational programs and promotional events, hoping to bring embroidery to the forefront of fine arts.

In addition to passing on the classic embroidery techniques she inherited from her Japanese instructor, Liu introduced students to her own embroidery secrets. In 1998, she founded an independent embroidery studio and began offering small group courses. As a testament to her mentorship and the extensive depth of the art form, some of her students have been with Liu for more than 20 years. She later taught at Caiyuan Embroidery Village (菜園刺繡村) in Changhua for a period of time between 2011 and 2012.

Through nurturing generations of artists who paint exquisite art pieces with needle and thread, Liu realized that the folk craft is also an extraordinary heritage that reflects the distinctiveness of Taiwan's aesthetics. To further maximize the applications of embroidered art, Liu also took lessons from embroidery designs from around the world.

With decades of experience in stitching bursts of color onto fabric, Liu is one of the highly recognized Taiwanese artisans who have taken embroidery to the next level. Her detailed works, which can be seen in exhibitions at home and abroad, are widely regarded as outstanding representations of how Taiwan has adapted and transformed classic Japanese-style embroidery.