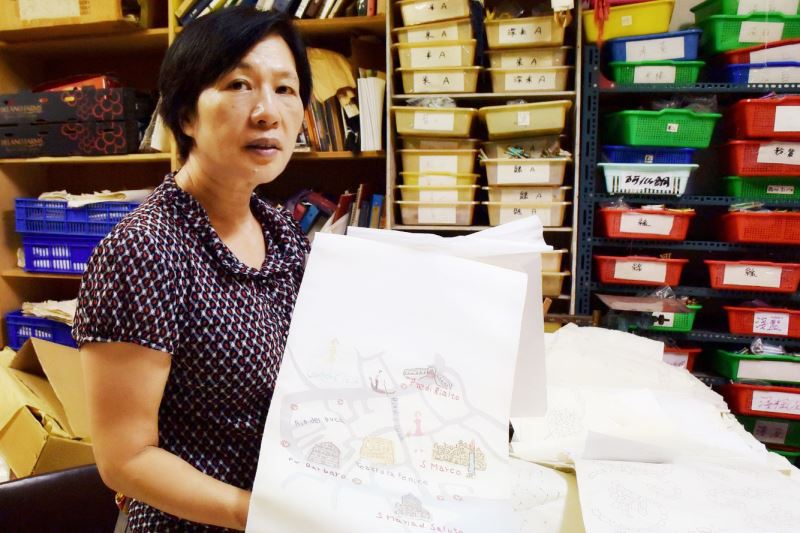 It is essential to keep culture alive in all shapes or forms for future generations to see the progression of a nation's identity. In Taiwan, there are those who have gone the extra mile to safeguard their traditional practices and art forms, and Huang Lan-ye, an expert at the ancient craft of kesi (緙絲), or silk tapestry, is one of those admirable individuals.

Wildly admired for its exquisitely detailed woven designs, kesi is far more than an opportunity for economic gain for Huang. With more than forty years of experience, Huang knows by heart every step needed in making the silk tapestries. She is also the only person in the nation that heads a team dedicated to the mesmerising art form that calls for a high degree of focus and thoroughness.

Also known as "the highest form of textile art," the silk tapestries woven in intricate patterns provide a fascinating insight into social history. Once viewed as a sacred material in ancient China, kesi was used to make imperial robes with dragon motifs, court dresses for the emperor, and the court attires of high-ranking officials. Though the manufacturing process is time-consuming and extremely complex, Huang, who is often seen seated against a wall stacked with bundles of thread in her studio, sticks to tradition.

Speaking of her journey into the world of historic textiles and methods for their preservation, the artist said it all began when she started to work at a company that manufactured embroideries and kimonos. With complete dedication to her work, Huang was appointed as a technical instructor during her second year with the company, and was later promised a promotion to become the director of the company's factory — a highly prominent position for career women at that time.

In 1994, Huang was asked if she would take over the company. The 25-year-old spent a week considering the offer and eventually agreed to shoulder the immense responsibility. Looking back, Huang said the credit of her decision to take on that significant role goes to her team. "Actually, I didn't really have a plan for life, it was my team members who pushed me forward."

Over the years, the Taichung-based artisan has successfully incorporated weaving, dyeing, and embroidering with both traditional and modern patterns, breathing new life into the centuries-old art form, which landed her the title of "Traditional Craftsmanship and Cultural Heritage Preserver," a recognition presented by Cultural Heritage Department of Taichung City in 2015.

In 2020, the kesi master was bestowed the title of "National Living Treasure" in recognition of her long-time efforts in reinvigorating the time-consuming heritage art form. While all of the well-deserved honors stand testament to her extraordinarily deep understanding of the meticulous craft, Huang does not stop there.

To help the exquisite textile return to its former glory, the award-winning artist has been pioneering new weaving techniques. In addition, while passing down an essential part of Taiwanese culture to next generations, Huang aspires to raise the global profile of kesi and also build a strong international market presence for the art form.

As for the prospects of kesi preservation, Huang, who is now in her sixties, remains quite optimistic. "More and more young people nowadays want to learn how to make kesi," she said.

"They are not like our generation who see kesi as a profession; they delved into the art form because they are fond of it, which helps them cope with the frustration they encounter during the learning process," the industrious heritage preserver explained, like a caring parent.

Elaborating upon her motivation behind her efforts in passing down the craftsmanship, Huang said she was deeply concerned about the talent drain of her industry. "As long as young people show their willingness to learn, I will teach them everything I know; I will never hold back a trick or two," she stated.