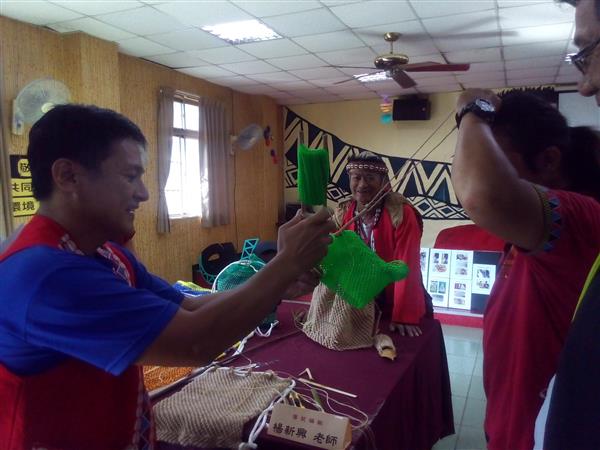 Name: 楊新興
Born: 1969
Did You Know That …?
Apart from perpetuating Tsou tribe's ancient weaving technique that produces the indigenous community's traditional hunting bags, Yang Hsin-hsing is part of the push to preserve the Tsou people's culture of yoifo – tribal elders with healing powers. The ongoing project seeks to explore yoifo' view on human life and soul, as well as such role’s cultural context through interviewing senior spiritual practitioners who are believed to be able to communicate with nature.

Tsou tribe's woven hunting bags made of locally sourced materials are unique in design which reflects the tribe's knowledge of natural resources and awareness of the ecological environment, as well as the aesthetics and life style of the Alishan-based community.

One of Yang's ongoing efforts is to pass on the intangible cultural heritage to young generations. Yang has been giving courses regarding the use of maolan, a plant commonly used by Tsou tribe in early years to make threads for various equipment, such as backpacks, fishnets, and animal traps.

Also known as New Zealand flax, maolan could be seen at almost each household in the indigenous community. However, as hand-made gadgets have largely been replaced by products that can be manufactured at scale, the popularity of the evergreen perennial plant is now on the verge of demise, just like the seldom applied traditional weaving techniques. Over the years, such the tribal heritage has grown into a calling that Yang could not ignore.

The leather tanning technique and the process of making leather products is another traditional craftsmanship reflecting Tsou tribe’s hunting culture. For the tribe in central Taiwan, each animal fur has its own different purpose depending on the ultimate application in mind. Various types of animal leather are used to make men's clothing, footwear, hats, bags, and bedding with tribal features.