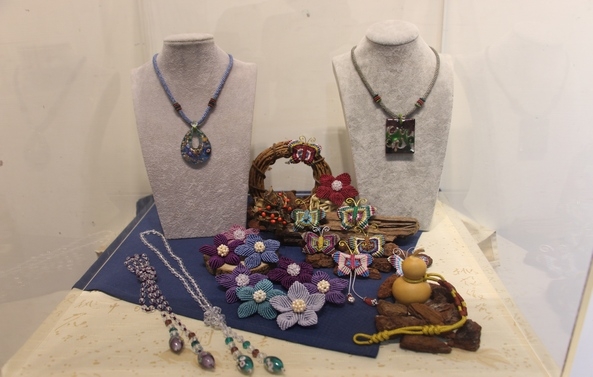 Name: 施寶容
Born: 1971
Birthplace: Lukang, Changhua
Did You Know That …?
Formerly a thriving commercial center, Lukang is more than a centuries-old town with well-preserved historical sites, as the number of craftsmen from the urban township accounts for almost one-tenth of the total in the nation. People in Taiwan are full of praise for artisans from the seaport.


Born in the Changhua township of Lukang, the cradle of Taiwan's traditional artisan crafts, young Shi Bao-rong (施寶容) was inspired by the art of traditional knots introduced by elder family members and has been deeply fascinated by the various combinations of ties and knots to this day. When the talented artist turned 20, she earned herself a reputation for weaving versatile knots that require intense dedication.

After graduating from a vocational school with a diploma in apparel design, Shi turned her focus on the Chinese traditional costume buckles and began to collect information pertaining to the intricately woven knots. On Shi's journey to refine her weaving skills, the artist took notes from guidebooks on the handcraft and also learned from Lydia Chen (陳夏生), a towering figure in traditional Chinese decorative knotting.

Versatility is the defining characteristic of Shi’s masterpieces. The artist is known for employing various unconventional mediums to create her own style of knots. Through creating these rarely-seen knots, Shi opened up a range of creative possibilities by using nylon, metal, pearl, jade, and silver, in addition to common materials, to create knots that reflect Asian and Western cultural features.

Although Shi has become a leading figure in the art form, she is not complacent about her expert status. The artist constantly refines her weaving skills and keeps bringing the craftsmanship to new heights. While the popularity of the traditional weaving technique has gradually declined, Shi's artworks demonstrate how the folk handicraft works well with clothes, furniture, and accessories, striking a successful balance of aesthetics and practicality.

In addition to being frequently invited to exhibit her works, Shi attaches great importance to the inheritance of the art form and has been committed to promoting the aesthetics embodied in the handicrafts.

When passing down the technique to create these intricate knots, the mentor-artist firstly dispels the rigid stereotype that weaving the traditional knots is too complicated to grasp, by explaining how basic knots are made. She goes on with their variations, as well as applying knots to the making of ornaments such as necklaces and brooches.

Since 1991, Shi has launched a creative weaving class at Taichung-based Huludun Cultural Center. She also has served as the weaving instructor for numerous art groups, among them is Chien Rong Knotting Society (千容結社) – a self-initiated organization that is composed of mothers who are fond of the handicrafts.

Out of her profound love for the ancient art form, Shi took it upon herself to lead the organization. Over the years, she has guided the amateur weavers to navigate their journey of weaving strings into symmetrical patterns and their performances have been beyond expectations.

The traditional knots by the group are of high standard and have been exhibited in both national and local venues, including the Taipei-based Chiang Kai-shek Memorial Hall and the Cultural Affairs Bureau of Taichung City Government.

To introduce more people to this extraordinary humanistic landscape, Shi has put basic weaving techniques into words and published two traditional knot-themed guidebooks in 1998 and 2000, respectively. In 2012, the seasoned weaver was named preserver of traditional arts by Changhua County.