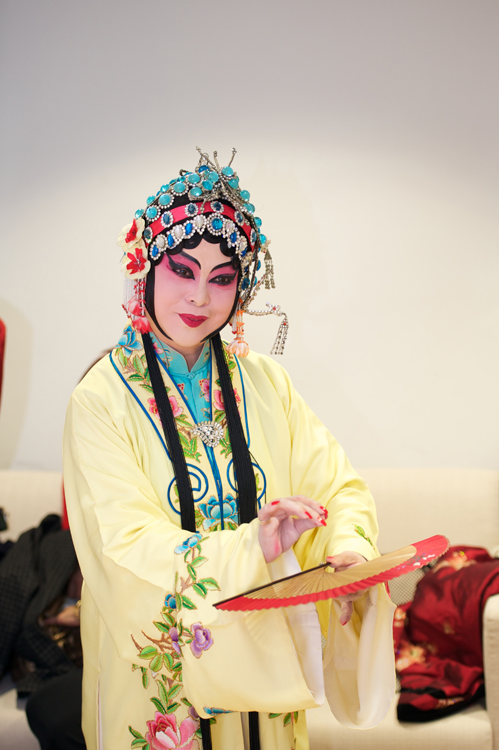 In addition to being one of the performers who master most Nanguan instruments in the nation, Lin Wu Su-xia's graceful gestures on stage and her authentic vocal style have contribute to her exceptional achievements in the Chinese classical music. The Tainan-born musician is also a Nanguan opera director and screenwriter; she has nurtured numerous Nanguan musicians, never hesitating to share her distinctive insights and the experience of more than five decades with new generation of artists.

Born to a music family with two important figures in Taiwan's Nanguan music scene, young Lin Wu, however, was discouraged by elder family members from joining a Nanguan ensemble. With persistence, she eventually convinced those against her pursuit of a career in Nanguan to give her two years to prove herself to be competent for Nanguan opera.

Lin Wu Su-xia dropped out of school when she was in ninth grade to receive training from Nanguan theater gurus Lee Hsiang-shih (李祥石) and Hsu Hsiang (徐祥). Such devotion and determination finally won Lin Wu blessing from her father – one of Lin Wu's loved ones that did not approve her love of the ancient music genre.

Before long, Lin Wu mastered Nanguan instrument pipa and Liyuan (梨園戲), an opera performed against a backdrop of Nanguan music. At the age of 20, she became Taiwan's first female Nanguan instructor when she landed a teaching position at Nanguan music ensemble Taichung Ching Ya Yueh Fu (清雅樂府).

The musician moved on to share her insight on Nanguan performance that requires high level of technique with Kaohsiung-based Nanguan communities after she married her fellow Nanguan musician Lin Cheng-chieh (林正介) and moved to the southern city. Recruited by Lee Hsiang-shih in 1977, the couple visited the Philippines for a five-month performance.

In 1988, Lin Wu became one of the receipts of the fourth National Folk Art Heritage Awards presented by the Ministry of Education. In the same year, she was invited to coach a program launched by the National Institute of the Arts (now the Taipei National University of the Arts) to preserve and promote Nanguan music. The following year, the artist began to tour in Europe, Australia, and Asia with Han Tang Yuefu Ensemble (漢唐樂府), a Nanguan music and dance troupe dedicated to reviving the traditional music.

In 1990, Lin Wu Su-xia was commissioned by the Council for Cultural Affairs, the Ministry of Culture's predecessor, to produce centuries-old drama "Retention of Shoes (留鞋記)." Knowing the story inside out, Lin Wu refined the poses, gestures, lyrics, and dialogue for the production. To better present the story, the artist took a step further to organize on-stage movements and positioning for participating actor-singers.

To bring new life into the declining Nanguan community, Lin Wu founded a music group called Hapho Academy (合和藝苑) in Taichung. Known for combining Nanguan operatic music and delicate postures of the qizi – a school of Nanguan opera, the group has been widely recognized for its performances that highlight the intangible cultural heritage. In 2010, Lin Wu Su-xia was designated by the Ministry of Culture as a preserver of the traditional art of Nanguan music.

Lin Wu Su-xia was invited by the Ministry in 2015 to refine the scripts for two classic Nanguan Opera pieces – Gao Wen-ju (高文舉) and Han Guo-hua (韓國華). Once again, the musician did not just finish the task with revised lyrics, dialogues, and proses. She offered her performance tips and hand-drawn instructions for stage directions, making the revised versions for the two productions important written materials for passing down the art form that has endured for hundred years in Taiwan.