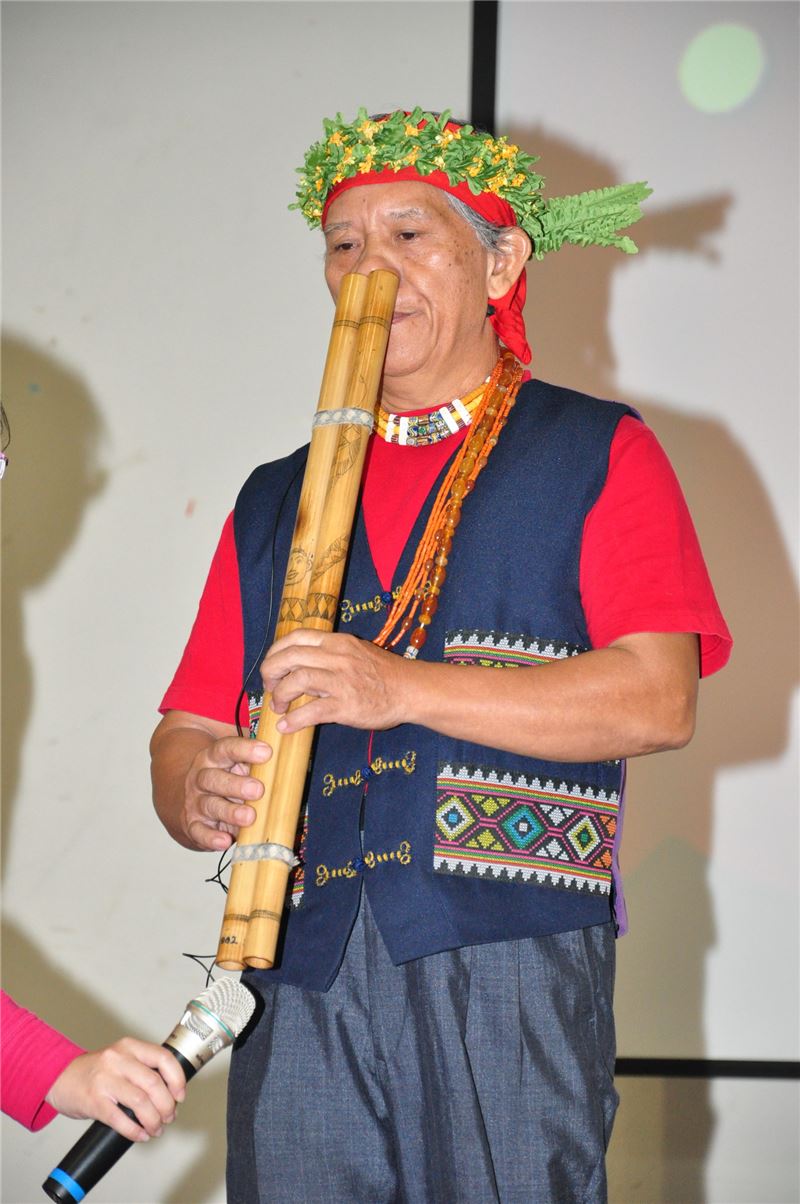 Name: 謝水能
Born: 1950
Place of Birth: Piyuma Village, Taiwu Township, Pingtung County
Did You Know...?
When a Paiwan young man fell for a girl from his tribal village, he would play his nose-flute to proclaim his affection. If the girl is moved by his music, the two could become friends.


Gilegilau Pavalius (also known by his Chinese name Xie Shui-Neng ) is a double-tube nose-flute performer, maker, and composer of music for nose-flute of the indigenous Paiwan tribe. He was born in 1950 in the Paiwan village of Pinghe, known as Piyuma tribal village, in Taiwu Township, Pingtung County.

At the age of five, he began learning to play nose-flute, figuring it out by himself. However, with few people in the tribal village knowing how to play it, he soon gave it up. It was 20 years later after getting married, under the influence of his father-in-law Tsamak Paqalius, that Pavalius picked the unique instrument up again.

To the Paiwan people, nose-flute is emblematic of hundred-pace viper, a creature regarded as the guardian of the tribe in tribal mythology. As such, the unique musical instrument holds a place of substantial importance to them. Legend has it that in ancient times, a young Paiwan man, wishing to hear the voice of hundred-pace viper, was observing a curling hundred pace viper. He noticed that the snake's head made a noise when it moved up and shook. Based on his observation, the young man presumed that the snake made noise from its nostrils. Trying to imitate, he took two bamboo sticks, bound them together, and blew through his nose. The wind instrument was thus invented.

In addition to playing them, Gilegilau Pavalius also makes nose flutes. After much research and numerous experiments, he found that green stripe bamboo (Bambusa dolichomerithalla) is best suited to making nose-flutes because segments of this kind of bamboo are sufficiently long.

A nose-flute produces six tones in total. One of the two bamboo pipes has three holes on it, while the other with no holes is used for bass. As such, a nose flute resonates with two sounds and is lower than the usual fipple flute. Unlike the often raucous and upbeat sound of Western instruments, the Paiwan nose-flute creates a gentle, melodious sound that calls to mind the breath of the Earth and the sighs of falling leaves, reaching deep into the soul.

Nose flutes are traditionally played both solo and as accompaniment for singing, on occasion of weddings and funerals, festivals and religious ceremonies, and even church service, for ceremonial or entertaining purposes. However, in ancient times, only warriors and nobility were permitted to play them.

"Although there's still a distinction between nobility and common people in Paiwan tradition nowadays, basically anyone of any class can play nose flutes. The only difference is that noble nose flutes are more elegantly carved, while those played by commoners are more ordinary," says Pavalius.

Pavalius's approach to playing differs from that of his forebears in that he has modernized the music and is creating new pieces. In his performances, there were also occasionally traditional pieces, with his wife and mother-in-law providing vocals for these songs. In 2001, he was included in the list of players in the book "Paiwan Nose and Mouth Flutes," and he has continued since then to perform in a variety of places in Taiwan and overseas.

In 2011, he was recognized as a preserver of the important traditional art of Paiwan two-pipe nose flute, and thus as a "National Living Treasure." Now a septuagenarian, his body remains as strong as ever, and he continues to make trips around the island to promote the art of nose-flute.

Other indigenous people in Taiwan also play twin-pipe nose flutes, but it is the Paiwan tribe that is most famous for rekindling interest in this historical instrument. In fact, the Paiwan is the one tribe on the island that boasts a large number of teachers and students of the nose flute. Nose flute of the Paiwan tribe has become a representative intangible cultural asset of Pingtung County in southern Taiwan.

In order to continue the tribal culture, the Cultural Resources Bureau of the Ministry of Culture and the Council of Indigenous Peoples have been committed to promoting the traditional nose flute playing for many years. The Indigenous People's Cultural Development Center under the Council of Indigenous Peoples, for instance, sponsored a workshop of nose flute playing last summer in a tribal village in Pingtung County. Any person interested in learning to play this unique musical instrument could register to attend the weekly evening courses.