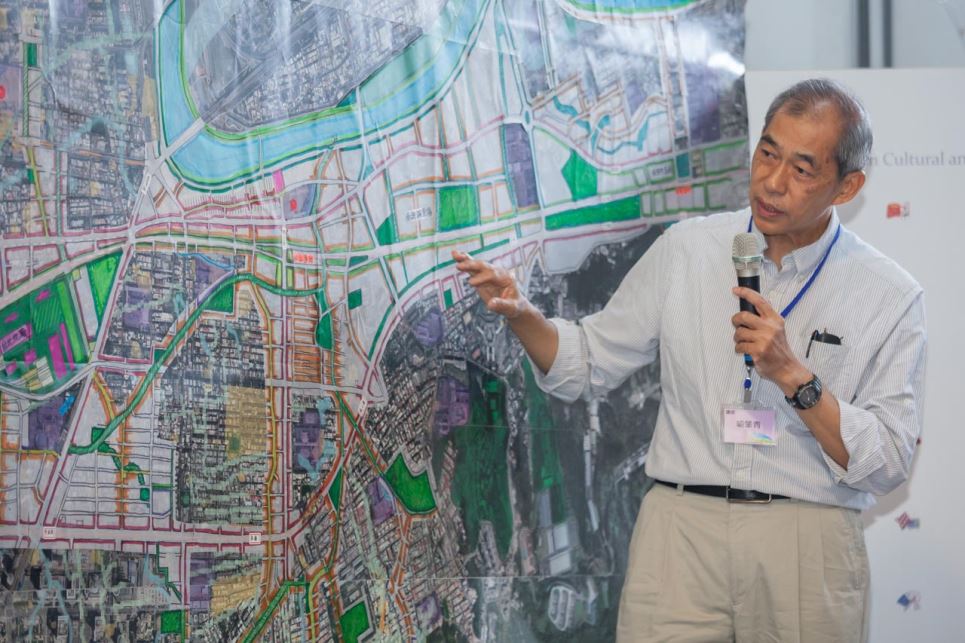 
In 1971, Yu Chao-ching graduated with a degree in architecture from Chung Yuan Christian College of Science and Engineering (now Chung Yuan Christian University). He continued his studies in the United States and in 1976 received a master's degree in architecture from UC Berkeley. Working at the San Francisco Urban Planning Department and an architecture firm, Yu received his California architect’s license in 1980. He returned to Taiwan in 1983 to take up a teaching position at his alma mater, and later became dean of the Department of Architecture.

Emphasizing the humanities in architectural design in his teaching, Yu often took students on visits up hill and down dale, helping them learn through field work and exposure to real-life. Passionate about the promotion of urban design, he founded the Department of Landscape Architecture and as dean of the department, he had incorporated integrated environmental planning into the syllabus of landscape architecture.

As dean of the College of Design, which offered four undergraduate programs in Architecture, Interior Design, Commercial Design, and Landscape Architecture, Yu added a fifth program—Indigenous Culture and Design in 2013. This was done in hopes of fostering interdisciplinary skills among indigenous students while helping them to develop appreciation of traditional indigenous values.

The first freshman class of this program included students from eight tribes—Atayal, Sediq, Truku, Amis, Paiwan, Pinuyumayan, Bunun, and Tsou—and the school held a special inauguration ceremony, inviting three tribal elders from afar to perform traditional blessings for the students and faculty. Accepting the scepter of leadership handed over to him by the tribal elders, Yu said: "Taking the scepter of leadership signifies shouldering the responsibilities and solving whatever difficulties to make wisdom and spirit of the aboriginal culture take root and glow."

A few years later, he retired and became an emeritus professor. He then took on a role in the first phase five-year program of the Ministry of Education's "Medium and Long-term Aesthetic Education Program" and presided over the "Environment and Life" experimental education project for the Asia Pacific Office of Aesthetic Research of the National Academy for Educational Research.

Yu Chao-ching had contributed to community reconstruction projects throughout Taiwan, helping rescue a number of historic buildings and assisting in community surveys and in-depth tourism promotion for outlying islands of Penghu and Matsu. In 2005, a conflict broke out over the preservation of the Losheng Sanatorium.

Located in Xinzhuang, the Losheng Sanatorium was completed in 1930 and was the only hospital accommodating leprosy patients during the Japanese era. For many patients forced to live there because of their condition, the sanatorium was their life-long home. Since the government was planning to build the Xinzhuang Metro depot there, the sanatorium was scheduled for demolition. A group of young people banded together with sanatorium residents to fight against the decision. The involvement of experts like Yu Chao-ching and John K.C. Liu in the resistance posed a strong challenge to the developers, who eventually formulated an alternative plan that would preserve 90% of the site. After the settlement of the Losheng Sanatorium case, Yu continued to dedicate himself to the preservation of historical buildings, including traveling to Japan to collect information. He has left behind many unrealized ambitions in the realm of preservation of Taiwan's cultural heritage.

Yu was involved in the teaching, research, and practice of environmental planning and design, focusing on people's situation and the creation of sustainable lifestyles. He was an early participant in elementary school art mentoring and went on to dedicate much effort to aesthetic education, with his efforts ably reflected in the many awards he received. In 1998, he was commended in the Construction and Planning Agency's "Key Demonstration Areas for Urban Design" for his design of a Taipei University Town special district. He also received the National Development Council’s Award for Enthusiastic Contribution to Promotion of New Urban and Rural Landscapes, the only representative of the academic community to be so honored.

In 2000, he won the Outstanding Planning Achievement Award from the Taiwan Institute of Urban Planning. Three years later, in 2003, the Architectural Institute of Taiwan recognized him in the 3rd Architectural Medal Awards in the Architectural Planning Design Category. That same year saw him receive planning awards from the Construction and Planning Agency's "Urban and Rural Landscape Design Project" (for the Taipei Municipal Affiliated Normal Elementary School—School Gate and Walls Pedestrian Remodeling project) and a 921 Campus Reconstruction New Campus Movement Contribution Award from the Ministry of Education. In 2004, the Ministry of Education honored Yu with the Award for Outstanding Executive Team in Creative Campus Planning, and in 2015, he received a Lifetime Contribution Award from the Taiwan Institute of Landscape Architects.