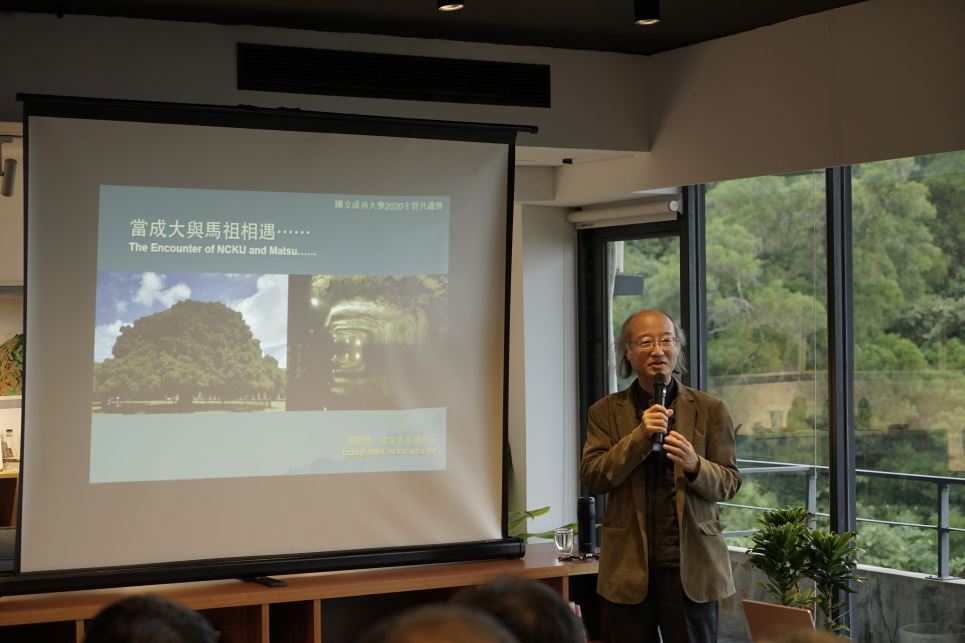 Name: 傅朝卿
Date of Birth: 1957
Place of Birth: Tainan, Tainan
Did You Know...?
Fu Chao-ching believes that among the 18 potential World Heritage Sites in Taiwan, the Matsu Battlefield Culture (馬祖戰地文化) , Wushantou Reservoir (烏山頭水庫), Jianan Irrigation Waterways (嘉南大圳), and the Alishan Forest Railway (阿里山森林鐵路) have the most universal appeal and uniqueness. Matsu has the world's most distinctive Cold War cultural landscape, while the Wushantou Reservoir and Jianan Irrigation Waterways are Taiwan's earliest water conservation systems which have played great roles in the agriculture on the Jianan Plain at the central-southern region of western Taiwan. Last, but not least, among the world's railway projects, Alishan Forest Railway has many unique engineering features.

Fu Chao-ching was born and grew up in the historical Tainan city. He studied at the National Cheng Kung University (國立成功大學) and then went on to University of Washington in Seattle, graduating with a Master's degree in architecture. After that, he went to the University of Edinburgh in Scotland to complete a doctorate in architecture. Currently, he is an emeritus professor of architecture at the National Cheng Kung University. He has been involved in cultural affairs in Tainan for many years, contributing much to the land and the people, in addition to having a profound impact on the development of Tainan City.

In his early days, when Taiwan's cultural heritage was less valued, he devoted himself to promoting related concepts, completing a number of survey reports, specialist papers, and books like "An Overview of Tainan’s Historic Sites and Historic Buildings," and "An Illustrated History of Taiwan's Architectural Culture." Through these, he has recorded and elaborated on Tainan's historical texture and architectural heritage.

Thanks to Professor Fu's advocacy, many of Tainan's unique monuments and historic buildings have found proper preservation, becoming the highlights of the city. For example, important cultural institutions such as the National Museum of Taiwan Literature and Tainan Art Museum were successfully established with his professional assistance.

Professor Fu has studied contemporary architectural history and cultural heritage protection for more than three decades, focusing on the preservation of contemporary architecture and cultural heritage both in Taiwan and around the world. His publications include hundreds of journal articles, conference papers, books, and research reports, which have won him the Golden Tripod Awards four times. He has taught at the National Cheng Kung University since 1983 and is often invited to give lectures all around Taiwan and abroad. His ability to make complicated topics easily digestible, along with the vivid pictures and interesting explanations, gave his audiences interesting and inspiring lessons in architectural culture.

Since the 1980s, he has turned some of his attention to world cultural heritage issues. With a deep conviction that although Taiwan is not a member of the United Nations, this should not stop it from preserving its own world heritage sites, he considers that it will be a huge boost to its preservation in the long term, when Taiwan's heritage is linked with world heritage preservation. In 2011, Fu led a group from the Ministry of Culture, along with NCKU faculty and students, to attend a meeting of the UNESCO International Council on Monuments and Sites (ICOMOS), presenting a paper introducing Taiwan’s achievements in cultural heritage preservation and outstanding cultural contributions.

Professor Fu has always loved photography and has taken photos of quite a few buildings. Since the years as a student, he has been on a journey focused on architecture, accumulating abundant travel experience along the way. As a professor of architecture, he emphasizes in his teaching that travel is essential to the study of the field, and he also suggests that as architecture majors, the students must expand their horizon through travel to see and appreciate the works of masters and to acquire the knowledge that one cannot get simply from books. As an architectural researcher and and a tour guide, Fu has not only fulfilled his dream of seeing the world but also gathered knowledge and information on architectural history along the way.

Fu believes that cultural heritage needs more innovative, more creative approaches to fit into the 21st-century environment and generate energy within cities. In the past, people's approach to cultural heritage was to freeze it, lock it down as it is like a museum piece, but this is not necessarily the best way to do things. Even better is to reuse the sites, give them new facilities and structural reinforcement so that they can continue to live without losing their fundamental essence. For example, in Paris they renovated a 19th-century railway station, making it into the Musée d'Orsay; while renovating London’s historic King's Cross Station, they added in a touch of Harry Potter; and in Tainan, the reconstructed Hayashi Department Store has found new function inside the old buildings, giving it new vitality and life. Through such approaches, these historic buildings have been able to attract more visitors and become more ingrained in people's lives.