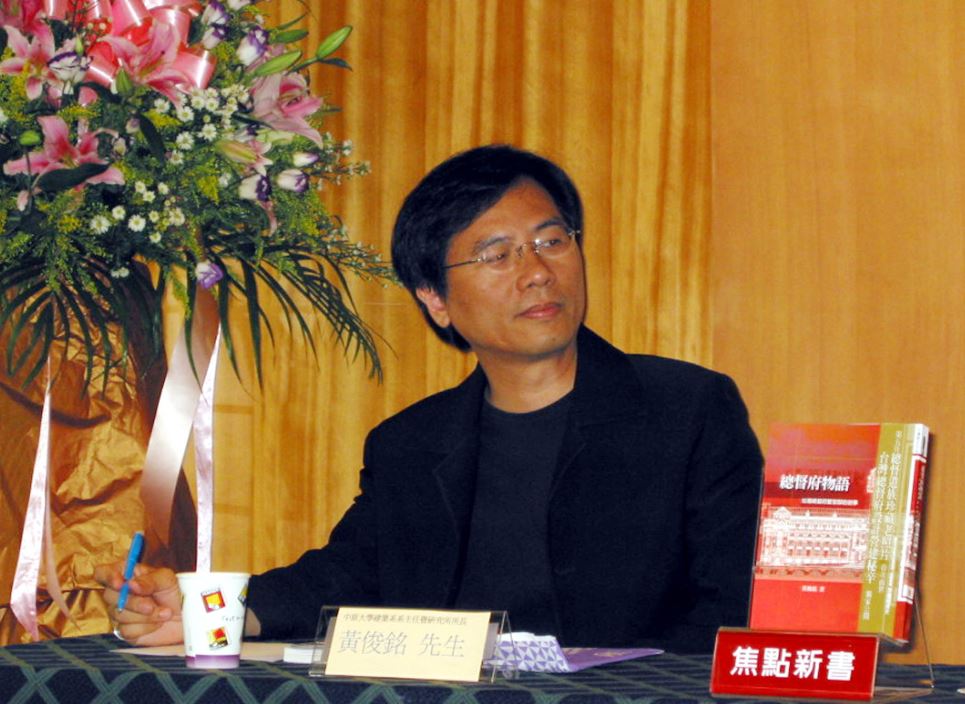 Name: 黃俊銘
Born: 1957
Place of Birth: Chiayi City, Taiwan
Did You Know That...?
Since Huang Chun-ming's (黃俊銘) older brother has already studied abroad in Japan, his family wanted him to study in the United States. The reason he finally decided to study in Japan was that he could not bear eating bread as part of his regular diet.


Hung Chun-ming (黃俊銘), a direct disciple of Japanese architect Terunobu Fujimori (藤森照信), earned a Ph.D. in Engineering from the University of Tokyo in Japan, and is currently serving as an associate professor in the Department of Architecture at Chung Yuan Christian University (中原大學).

His research is concentrated on the history of modern Asian architecture and urban development. He has presided over many research projects on modern architecture and historical sites such as the Taipei Guest House, Taipei Story House, Hsinchu Shrine, Chiayi railway station, Taichung Prefecture, and Taichung Shiyakusho.

The books he has translated from Japanese include "Kenchiku towa nanika Fujimori Terunobu no Kotoba (藤森照信論建築)," "Kenchikushiteku Mondai (建築為何是這樣：藤森照信建築史的解題)," and "Nihon no kindai kenchiku (日本近代建築)."

When Hung was pursuing a Master's degree at the National Cheng Kung University (NCKU), he was exposed to the research findings of professor Hiroshi Hara's (原広司) at the University of Tokyo, whose research spans both architecture and mathematics. The professor uses set theory, topology and other disciplines within applied mathematics in the analysis and design of architecture, as well as the investigation and comparative study of the dwellings of different inhabitants across the world.

As someone who transferred from the Department of Mathematics to the Department of Architecture, Hung found that the professor's works aroused the interest he previously had in mathematics and opened a new horizon in his academic path. During his time assisting doctoral students from the Uchida Lab at the University of Tokyo in their field research in Taiwan, he witnessed the rigorous and systematic approach that Japanese scholars had in conducting research, which prompted him to study abroad in Japan.

Hung's academic pursuit did not go as planned in the beginning. He originally planned to conduct research under the supervision of Hiroshi Hara, but switched to a doctoral program in art at the University of Tsukuba based on an instructor's advice. However, after some internal disputes at the university that led to a change in student numbers, he was deprived of his spot at the research program. In desperation, he returned to Institute of Industrial Science at the University of Tokyo where he entered a research program under the mentorship of Professor Terunobu Fujimori.

Professor Fujimori, a scholar who values independent research, always conducts research on his own. He places great emphasis on the ability of graduate students to thrive in their research methods, topics, literature and theories. Unlike other traditional research programs in Japan where a systematic approach is preferred, Hung's research program uses findings from all its Master's and Ph.D. students as part of its overarching approach. It is also due to this experience that upon returning to Taiwan, he paid more attention to the cultivation and development of students’ talents, as opposed to a systemic approach.

Hung chose the comparative research of vast urban areas across Asia as part of his doctoral dissertation. The relevant literature and historical materials he studied, spanning from the 16th century to the 19th century, touch on Asian cities that were once colonized by European powers such as Spain, Portugal, the Netherlands, Britain, and France.

Although one may understand contents of some ancient European documents based on the research papers written in English and Japanese by scholars in the past, it can be difficult to read documents from different periods. After returning to Taiwan to devote himself to the academic field, he discovered that research on the history of Taiwanese architecture in the past was mostly limited to fieldwork and primary sources. Since Taiwan had been influenced by foreign architecture styles since Dutch rule, it is impossible not to view Taiwanese architectural history from a wider perspective, while also bringing a richer discourse to modern Taiwanese architectural research.

Back in the 1980s, Professor Terunobu Fujimori would introduce architecture and urban history in popular magazines in an easy-to-read style. He would also form societies where like-minded writers, artists, naturalists advocate for sustainable living.

Deeply influenced by Professor Fujimori, Hung thought of how he should contribute to Taiwanese society outside of academia. At a time when heritage conservation was still in its infancy in Taiwan, Hung would conduct first-hand studies on heritage conservation methods in Japan in addition to his dissertation. Upon returning to Taiwan, he carried forth the ambition as a means of giving back to society.

Hung continues to conduct research on different theories and technologies in this field while cultivating young talents.