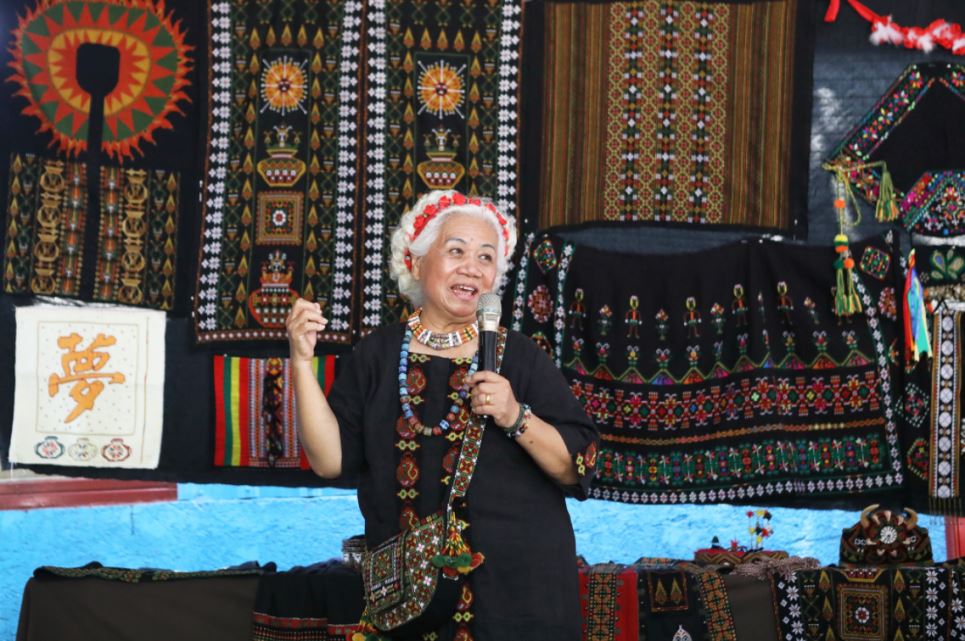 Chinese Name: 陳利友妹
Year of Birth: 1943
Place of Birth: Taitung, Taiwan
Did You Know?
Lavaus, a Paiwan craftswoman, has devoted decades of her life to keeping the traditional embroidery of her people alive. She has become a specialist in various indigenous Paiwan cross-stitch figures, making use of bright contrasting colors to capture and showcase the culture and social life of her people through clothing, an approach that is deeply characteristic of the culture of the eastern Paiwan. Her works have not only received widespread acclaim at home, but can also currently be found in the collections of many major museums in both Taiwan and Japan. In 2021, she was named by the Ministry of Culture as a preserver of the important traditional craft of Paiwan embroidery (kinavatjesan), making her officially a national treasure.

Lavaus was born into a family of 10 siblings in 1943, in the Paiwan village of Tjavualji (known in Mandarin as Taimali) in Taitung, on Taiwan’s east coast. Her mother was an expert embroiderer, and from her she acquired a good level of skill in the craft, beginning at an early age. After finishing her studies at elementary school, Lavaus began to take on embroidery work to support her family. At the age of 16, she pursued a level of knowledge of Western-style tailoring, but ultimately it was the vibrant colors and intricate stitch patterns of traditional Paiwan embroidery that remained as her greatest love.

After she got married and moved to Kaohsiung for family reasons, Lavaus took a break from embroidery for a while. It was not until later, when her husband fell seriously ill, that they moved the family back home, where she began to consider returning to her craft. Later, as Taiwanese society began to pay more attention to indigenous culture, related handicrafts started to enjoy a boost in popularity, and as a result, Lavaus again picked up the needle and thread, fusing the traditional Paiwan embroidery patterns she had learned from her mother with modern elements and adding her own creativity and color schemes to design vivid embroidery patterns for dresses, hats, and bags in traditional Paiwan colors. Through this, with only a small business of a grocery store and a needle and thread, Lavaus was able raise her four children even among great hardship.

At that time, although there were some good response to her embroidery sales, she only considered it a hobby and was not planning on making it a career. She was also subjected to ridicule from her neighbors, but she never paid any attention to the criticism of others and just insisted on sticking to what she truly loved. As her embroidery work became better and her livelihood improved, she closed her grocery business on the advice of a friend. In 1999, with the help of her family, she set up Mama Chen’s Studio, combining her interest and work to make embroidery a lifelong ambition.

Lavaus' meticulous craftsmanship and eye-catching color schemes make her works, focused primarily on the various patterns of the Paiwan people, a showcase for the development of the tribe, as well as their cultural and social life. In 2003, a friend assisted her in applying for the Taiwan Craft Competition, which is considered as the Oscars of Taiwanese crafts. At first she resisted, thinking her work was too ordinary, but to her surprise, she won the 10th "Craft Dream Theme" Award. Later, she also received the Taiwanese Craftsperson award from the National Taiwan Craft Research and Development Institute, highlighting her outstanding achievements in traditional Paiwan kinavatjesan embroidery.

In 2021, she was named by the Ministry as a preserver of the important traditional craft of Paiwan embroidery (kinavatjesan), making her officially a national treasure and the first traditional craftsperson from Taitung to receive the honor. Many major museums in Taiwan and Japan have collections of Lavaus' works, and she has also been invited to exhibit in many countries from Japan to Europe. She adds that a few years ago, a Japanese researcher flew all the way to Taiwan to ask her for advice on the embroidery culture of the Paiwan people for anthropological research.

Today, with more than sixty years of embroidery experience under her belt, Lavaus is able to embroider and paint on fabric immediately without even having to make a draft first. Her sharp eyes are still fully focused on the embroidery cloth, threading the needle between her fingers, back and forth, demonstrating Paiwan embroidery techniques with great energy. In the blink of an eye, the once seemingly ordinary piece of black fabric is suddenly filled with beautiful patterns. Lavaus remains committed to keeping the craft of kinavatjesan alive, hoping to continue passing on this part of the Paiwan culture to future generations.