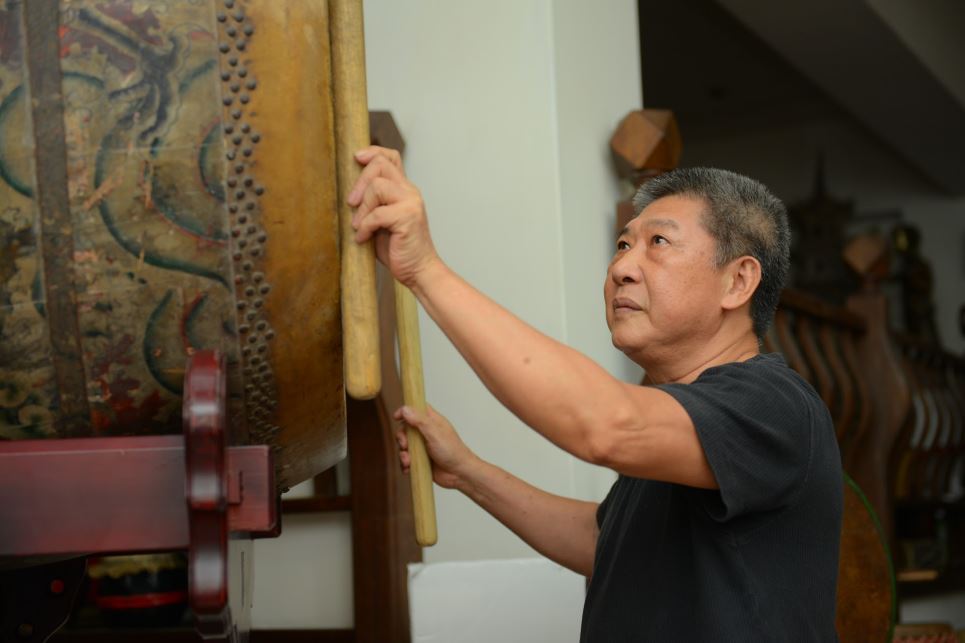 Wang Hsi-kun, the second-generation heir to Xiang Ren He, is a drum-maker and national treasure. Building on the foundation set down by his father, Wang has learned through years of hard work and experimentation and ultimately built XiangRenHe back to its former glory and even beyond, onto the international stage. “When I first started, I felt helpless,” he says, “but now, drum-making is my life." In 2021, Wang was named an important cultural heritage preservation skill preserver by the Ministry of Culture for his drum-making, a well-deserved elevation to “National Living Treasure” for this hard-working artisan.

Wang Hsi-kun is the son of the founder of Xiang Ren He, Wang Guizhi, better known as Master A-tu. The elder Wang first went into business under Wang Yuanxing Drums in 1924 making drum skins. Later, he handed the business down to his younger brother, embarking again in 1927 with the establishment of XiangRenHe, making drum skins and suona. After World War 2, traditional temple fairs to entertain the gods saw a revival. Major temples in northern Taiwan, including Xingtiangong, Longshan Temple, Zhinan Temple, and Yuantong Temple all sought out drums from Master A-tu by name, and his reputation began to spread across Taiwan.

Although Master A-tu was well-known and respected in the drum-making industry, he always wanted his children to inherit the family tradition of becoming scholars rather than following in his footsteps. As a result, while Wang Hsi-kun saw drums being made from an early age, he never actually took part in the work himself. When the elder Wang died in 1973, eldest son Wang Hsi-kun had just started his military service. After his discharge, Wang obeyed his father’s last wishes and was admitted to the night school of the Department of Business Administration of Tamkang College of Arts and Sciences (now Tamkang University). During the day, he helped his mother and uncle take care of various tasks in their store. Before graduating from college, Wang’s uncle wanted to use the name XiangRenHe to set up another company because he could not bear to see Master A-tu’s hard-won business change ownership. And so it was that, at the age of 30, Wang Hsi-kun decided to forgo a career in business and take up his father’s mantle instead, turning to a lifelong career in drum-making.

Wang began to explore the process of making drums by himself, but soon found the traditional drum-making process was complex, delicate, and involved much hard work, from the selection of drum skin through hair removal, fat cutting, smoothing, and sun drying. That’s without even mentioning the selection, processing, splicing, and combination of drum shells. Then there is the actual assembly of the drums, testing them out, and making sure everything is just right before the final painting and decoration. As such, drum-makers must be good at a wide variety of skills, from carpentry to leatherworking and sound adjustment, as well as being familiar with the various materials, tools, construction methods, procedures, and specialist tricks involved in drum-making. All of these tips, tricks, and techniques are valuable cultural assets deserving of preservation.

Wang is also determined to promote transformation in traditional craftsmanship. In 2001, he opened the XiangRenHe Drum Culture Center next to the factory, which collects drums from countries all over the world, including innovative drum creations, aesthetics, and techniques. Through this, he aims to inject new ideas into the tradition. In his attempts to create a unique “Oriental drum,” he has incorporated silk embossing, dyeing, weaving, torn-paper collage, and blue-and-white porcelain, making drums that also have value as artistic collectors’ pieces. He also aims to expand the application of drumming as art, expanding into the areas of fitness and sound therapy. In 2013, he changed the company name to XiangRenHe Drum Workshop, working to further highlight the goal of passing on the craft to later generations.

In 2009, the Taipei County Government registered drum-making as a traditional art of the county; that same year, Wang won the Taipei County Traditional Artists Award. He also went on to win the New Taipei City Culture Award in 2017, and in 2021, Wang was named by the Ministry of Culture as an important cultural heritage preservation skill preserver, marking his elevation to the status of “National Living Treasure.”

Wang Hsi-kun’s dedication to drums has won recognition from all over. Famous performing groups such as the excellent U-Theater, Ju Percussion Group, Ming Hwa Yuan Arts and Culture Group, and the Han-Tang Yuefu Music Ensemble, as well as locally and internationally famous temples across Taiwan all specifically use XiangRenHe drums. Through Wang’s commitment to his craft, the sound of XiangRenHe drums can be heard for miles around, a voice of Taiwan booming across the globe!