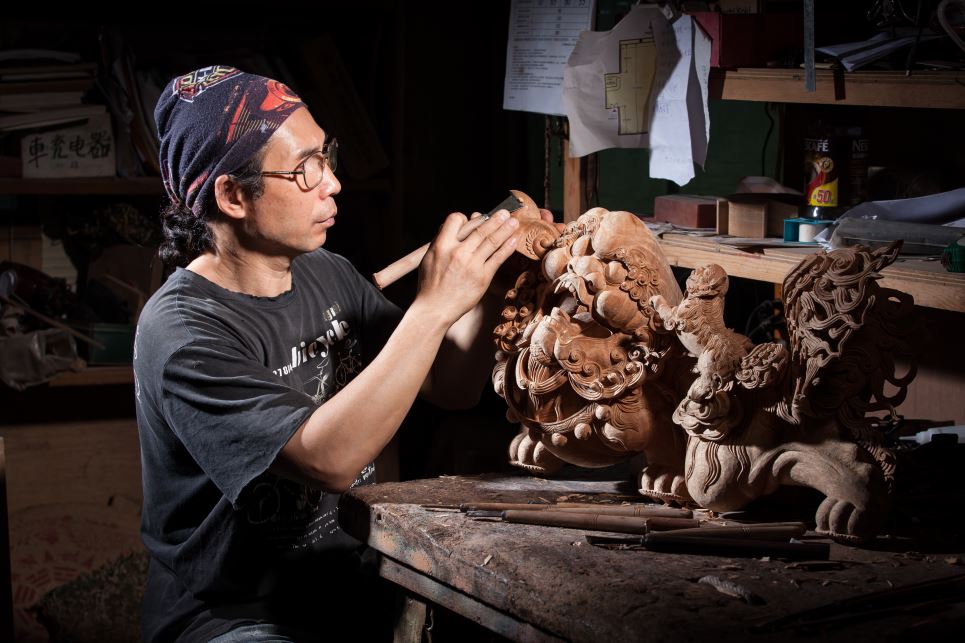 Chinese Name：蔡楊吉
Year of Birth: 1956
Place of Birth: Hsinchu, Taiwan
Did You Know...?
National traditional wood-carving preserver Tsai Yang-chi apprenticed under the master woodcarver Huang Guei-li (黃龜理), learning the skills of delicate wood carving, while also striving to become an art worker well versed in both the technical and the academic aspects of his art. In 2014, Tsai was honored with the Global Chinese Culture and Arts Award for his long career in the art, with a number of historic works for several of Taiwan’s most famous temples having passed through his skilled hands for restoration to continue to be passed down to future generations.

Tsai Yang-chi's father ran a woodworking factory when Tsai was young, giving him early exposure to the art and craft involved. However, he found himself somewhat less than interested in taking over the reins of the family business in the future, with his youthful work mainly being in more menial tasks like polishing wood and doing odd jobs, which he found trivial and repetitive. As he grew older, he moved to Taipei to learn temple carving, the diverse array of types and skills involved making him increasingly interested in learning, honing his skills to an ever more sophisticated level. After completing his national service, Tsai came home to find that the factory of his childhood had been disbanded, leading him to turn his attention elsewhere for work. He eventually happened to meet Huang Guei-li, a nationally recognized and widely renowned master of temple carving, at the Sanxia Zushi Temple. This chance encounter would lead Tsai to quit his job and rejoin the wood carving industry, taking up jobs wherever he could find them.

In 1990, Tsai Yang-chi was recognized by the Ministry of Education's "Folk Art Heritage Awards" and began formally studying traditional woodworking under Huang. Four years later, he was given his own national cultural certification. Tsai inherited Huang’s finesse and expertise in wood carving, as well as developed the habit of carefully examining everything he does. He has said that there is nothing better than the composition and basic form of wood carving that he learned from studying with such a master of the art. In the course of his studies, Tsai was involved in projects working on restoration for many of Taiwan’s most famous temples, including the Zushi Temple in Sanxia, Tianhou Temple in Taipei, Jihua Temple in Beipu, and Sanyuan Temple. In 2005, Tsai Yang-chi took part in wood-frame structural carpentry training with architect Li Chung-yueh. Afterward, Tsai became an artisan holding licenses in both joinery work and wood-frame structural carpentry.

Tsai Yang-chi believes that in this line of work, everyone starts as an apprentice, so everyone's skill level is very different, and the difference lies in the artist’s degree of understanding of deeper levels of the work. His philosophy, he has said, is that "folk culture provides the backdrop, everyday literature the foundation, and on top of these, I strive to be an artist with both artistic and academic understanding."

After his marriage at the age of 30, he returned to Hsinchu and opened the Tien Hsin Fang Wood Carving Workshop (添薪坊木雕工作室). At first, before his reputation was established, there were no job opportunities to speak of, so he moved into creative work. Afterward, he took on work doing wood carving for the Hsinchu City God Temple and both joinery and wood-frame structural restoration work for the Hsinchu Zhulian Temple, gradually making a name for himself. Tsai says that as today’s steel and concrete building materials have gradually replaced traditional wooden buildings, the demand for woodwork and wood carving is gradually shrinking, making it difficult to get young people invested in the art, leading to a potential cultural rift. As such, he has also turned his attention to promoting traditional wood carving. In addition to drawing up lesson plans, he also offers classes for the general public to learn the art from square one.

In 2014, Tsai won the Global Chinese Culture and Arts Award for his work, with a number of historic pieces passing through his skilled hands for restoration to continue to be passed down to future generations. He has also been recognized with the 3rd Taiwan Crafts Workshop Award from the Ministry of Culture, and was named as the preserver of Intangible Cultural Assets (Wood Carving) by Hsinchu City Government. He also won the 21st Global Chinese Culture and Arts Award and was recognized by the Ministry of Culture as one of the Important Traditional Crafts' preservers. His works have also been collected by Tama Art University in Japan and the Sun Yat-sen Memorial Hall and Cultural Affairs Department, New Taipei City Government in Taiwan, and he has been invited to put on exhibitions more than thirty times.