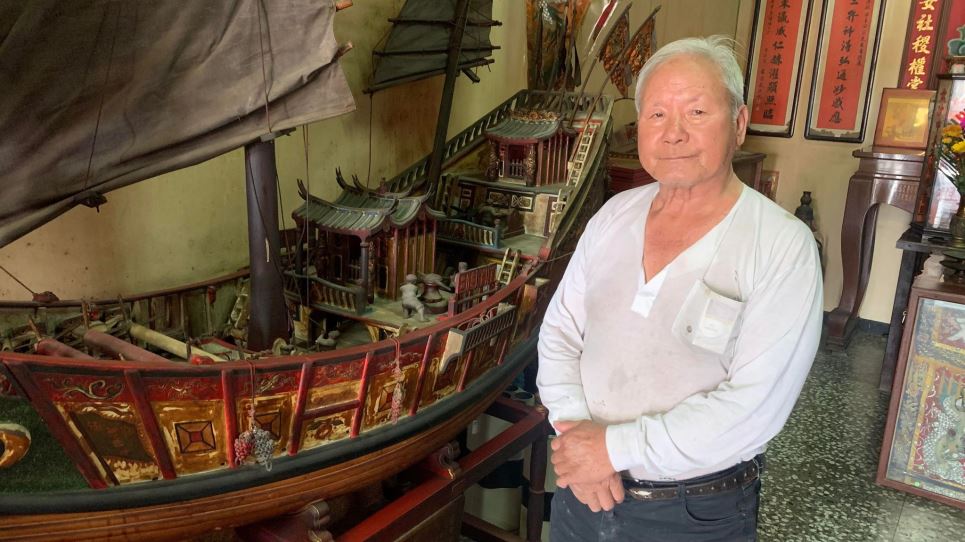 Chinese Name：陳金龍
Date of Birth: December 1945
Place of Birth: Tainan City, Taiwan
Did You Know...?
Chen Ching-lung is one of the Anping area's most important masters of the building of ceremonial Wang Ye boats. His technique and workmanship highlight the characteristics that define the art as it has developed in that area, and he has put them to use in the construction of more than 30 Wang Ye boats over the years. With their combination of technical excellence and aesthetic quality, Chen's Wang Ye boats are an absolute showcase of professional skill. In 2019, the Tainan City Government announced that Chen was to be given the honor of being named a Preserver of the art of Wang Ye boat construction and restoration.

Chen Ching-lung is a native of Anping District, Tainan City, a graduate of Ximen Elementary School, and former head of the Xingangxing Shipyard. As a child, Chen lived near the shipyard, and as he passed by it on his way to school every day, he grew interested in watching the masters at work. While still in elementary school, he even began doing odd jobs to help out around the yard.

From the age of 13, he began learning to build boats in his uncle Chen Ming-qing's shipyard; Chen had learned from his uncle Chen Dai-kai, who had been a famous fishing boat builder during the early 20th century, and so the boat building skills that Chen Ching-lung learned were ones that had been passed down from generation to generation.

In the early days, Chen mainly built wooden fishing boats, but as times changed, he began to also work on building yachts, as well as being hired to build Wang Ye boats and Dharma vessels for temples around the nation. While he has since retired from the shipyard, he continues to work on the production of Wang Ye boats. The construction of Wang Ye boats is an indispensable technique for Taiwan's Welcoming Wang Ye ritual, as well as an invaluable technique for the preservation and restoration of ancient sailing ships and Wang Ye boat artifacts.

Chen has said that since there have only been a few masters in Taiwan who can make Wang Ye boats, in the early days, many were made by masters who came over from China. When he started to make the boats, his technique was based on the sailing boat making method he had learned from Chen Ming-qing, and then over time he slowly worked out the methods for making Wang Ye boats. Chen has said that the difference between sailboats and Wang Ye boats is that the former is used to carry goods, while the latter is for the gods to use, and so at the production level, the latter involves many more details that require attention.

Wang Ye boats are influenced by the customs of different areas, with slight differences in appearance and technical aspects. Chen Ching-lung says that he uses traditional workmanship to build Wang Ye boats; the shape of these boats is slightly different from usual fishing boats, being designed more in line with ancient sailing boats. Wang Ye boats' bow and stern curvature is larger, intended to block the waves, and many parts are named after the Chinese zodiac signs, such as "the eyes of the dragon," "the tiger's teeth," and so forth.

Chen Ching-lung's outstanding technique, ability, and persistence in building Wang Ye boats are evident to all. He is a very special boatbuilder because normal boatbuilders only specialize in one type of building, but Chen is familiar with and skilled in both traditional fishing boats and the restoration and building of Wang Ye boats.

Chen's talent and knowledge have made him an important maker of Wang Ye boats in the Anping area, and over the years he has made more than 30 such boats, all showing the particular Anping characteristics in their production methods, workmanship, and aesthetics. He is well versed in the knowledge and process required for the making of such boats, as well as being deeply familiar with the names of the boat parts and their functions and having a wealth of experience in accurately engaging in the construction processes.

Thanks to this, in 2019, the Tainan City Government announced that Chen had been named a Preserver of the art of Wang Ye boat construction and restoration. The following year happened to coincide with the next Beiji Hall Yuxing Temple's Wang Yeh Boat Burning Festival in Anping District. The festival happens every four years, for which Chen Ching-lung was commissioned to build the boat. In addition, many other temples in the area also boast works by Chen, such as the Lingji Temple, which commissioned him to build a Yongsi-type Wang Ye boat for worship purposes.