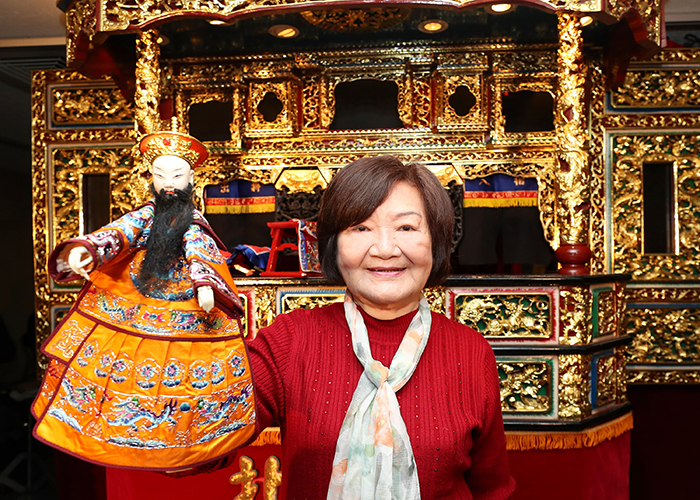 Chinese Name: 江賜美
Date of Birth: 1933
Place of Birth: Nantou, Taiwan
Did You Know?
Chiang Shi-mei is part of the first generation of female lead performers in Taiwanese po-te-hi puppet theater, and has accumulated more than half a century of experience performing the art and bearing witness to its rise and fall in Taiwan. Her expertise in interpreting historical shows from a female perspective creates performances markedly different from the mostly male perspective of po-te-hi, thus carving out a distinctive niche for her. In 2021, she was awarded the title of National Living Treasure by the Ministry of Culture.

Chiang Shi-mei was born in 1933 in Sankuaicuo, Nantou, and her father, Chiang Tung-sheng (江同生), was a backstage musician for po-te-hi puppet theater. She has been involved in this form of theater since she was a teenager, accompanying her father around the country, helping to organize the puppets, and learning as she went along. In the early years, women were forbidden to perform in po-te-hi because of various taboos, but the Chiang family kept a more open mind.

Chiang Shi-mei never formally studied under a teacher, and her skills are based only on copying the puppetry, plot, and diction of famous Nantou artists such as Chang Wan-te (張萬得) of the Fuxing Society, Tsou Sen-lin (鄒森林) of Sen Lin Yuan, Chou Kun-jung (周坤榮) of Chi Yi Yuan, and Wu Shu-chuen (吳樹全) of Nei Chun. As a teenager, Chiang was at the peak of her memorization and learning abilities, and so by carefully studying the performances of these masters, along with plenty of hard work of her own, she was able to improve and refine her puppetry and performance skills over time.

In 1945, Chiang Tung-sheng often performed with well-known theater groups in Nantou, and when there was a shortage of staff, his daughter would occasionally help out, and during which she learned the art of singing for performances and began to build a reputation, developing a group of female fans. When her father saw her perform, he was struck with the idea of making it a special feature of shows, and so he decided to form his own family troupe, named it Shi Mei Lou (賜美樓), and, with Chiang Shi-mei as the lead actress, performed all over the country. At that time, whenever there was an announcement that the lead actress Chiang Shi-mei was coming to perform at a theater or temple entrance, the troupe was always met with a full house. She once remarked that she felt like this could be due to "a blessing from Wang Ye," implying that she may have earned the favor of Xiqin Wangye, the god of the theater.

In 1952, when Chiang Shi-mei was 19 years old, a famous theater in Dadaocheng, Taipei, invited Shi Mei Lou to perform. Previously, only the well-known troupes of I Wan Jan Puppet Theatre and Hsiao Hsi Yuan had taken turns performing at this particular theater, and so Shi Mei Lou joining them was a major event that caused shockwaves in the po-te-hi world.

At the age of 35, Chiang decided to settle in Xinzhuang, Taipei, for the sake of her children’s education, performing at temples in various villages around Taipei. Due to the great popularity of the performances, jealous onlookers reported her troupe to the police. At that time, troupes had to apply for licenses from the police, with each license good for only one show, but the troupe would often perform three shows. In order to resolve this problem, the Jin Kwei Lo Puppetry Company and New Kwei Lo Puppetry Company were formed in 1984. Later, the troupe took on Jin Kwei Lo as its overall name. At the age of 90, Chiang continues to perform and teach po-te-hi, and has witnessed the rise and fall of the in Taiwan, from open-air temple fairs to indoor theaters, and even performed at the invitation of public sector organizations.

Her son, Ko Chia-tsai, has inherited his mother's mantle, and together with the third generation, Ko Shih-hung and Ko Shih-hua, he is working to perpetuate the culture of po-te-hi. The elder Ko learned traditional po-te-hi from an early age and has been involved with it for half a century. His children Ko Shih-hung and Ko Shih-hua, are continuing the tradition, participating in art festivals and puppetry seminars in Taiwan and abroad. At the same time as they work to keep the exquisite beauty of Taiwanese puppetry alive, they are also learning about Western puppet theater, hoping to create new opportunities for modernizing the art back home in Taiwan.

In 2021, Chiang was named by the Ministry of Culture as a preserver of the important traditional performing art of po-te-hi, joining the ranks of Taiwan's National Living Treasures. Even today, her passion for art remains as strong as ever. In addition to performing, she is also responsible for behind-the-scenes work in the troupe, including choreography and production, and also participates in teaching and performing in cultural venues. She hopes that more people will learn to appreciate the beauty of po-te-hi and that the tradition will continue to on as a vivid part of the vibrant world of contemporary entertainment, carving out a niche all of its own.