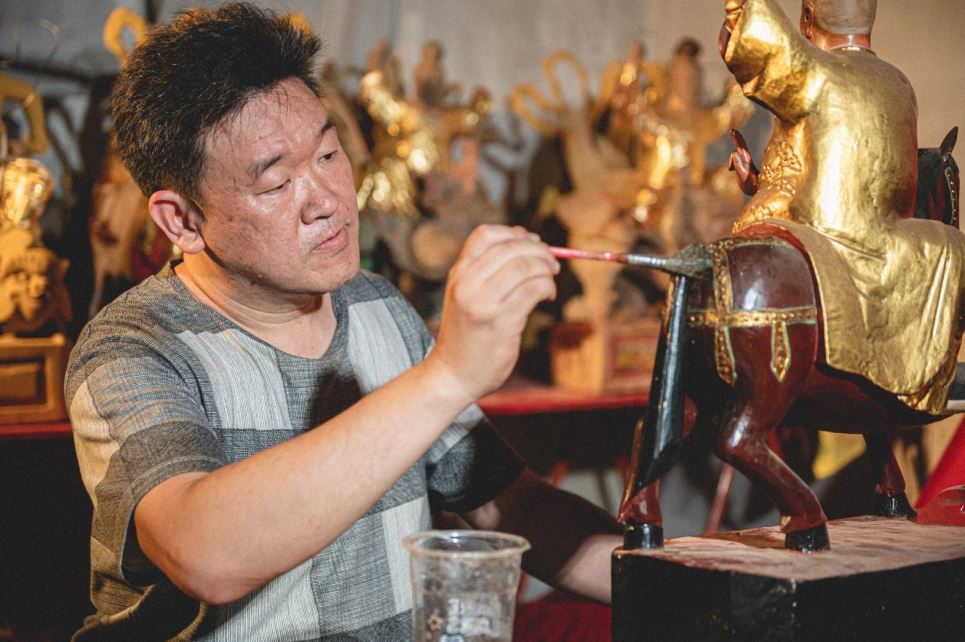 Chinese Name: 金明偉
Date of Birth: 1970
Place of Birth: Taipei City, Taiwan
Did You Know?
Jin Ming-wei is engaged in the crafting of statues of deities. He has been involved in the restoration of Taiwanese folk statuary since the 1990s, accumulating more than 30 years of practical experience and vast familiarity with restoration skills, techniques, processes and materials, ensuring that the restored idols look authentically old while also boosting their value. He upholds the spirit of "repairing the old as the old, full of old-fashioned flavor," a credo he has applied to the restoration of countless statues over the years. In 2021, he was registered as a Preserver of Tangible Cultural Assets of New Taipei City for his work.

Jin Ming-wei, a statue restorer also known as Master A-Bao, has had a love for woodcarving and statues since he was a child. After graduating from middle school, he worked as an apprentice in a Buddhist worship tools store in Longshan, Wanhua, and studied under master leather painter Ho Jin-tu (何金塗). Ho saw Jin's dedication to craftsmanship, so he also privately instructed him in the repair and decoration of statuary. The first statue that Jin restored was one of Guang Ze Zun Wang (廣澤尊王) which was purchased in Lukang, Changhua, in early 1991. At that time, the face of the statue was already moth-eaten, but after two months of repairing, he was deeply touched to see the appearance of the finished product, and from then on, he was determined to commit himself to statue restoration. Jin continued his work as an apprentice until he joined the army for his national service, and after completing his service and being discharged, he established his own studio, Heshanxuan (合山軒). "He" is from the Shenghe Temple, with which the family has a long and deep connection; "xuan," meanwhile, comes from the fact that Jin Ming-wei once studied with the craftsmen of Longshan Xuan and Jinshan Xuan, and was grateful for their patience and grace; "heshan" is also a reference to having a refined mastery of his craft, to "not being unmoving like a mountain (shan)" and broadly integrating (he) a wide range of schools and styles.

Jin Ming-wei joined a temple restoration team in 1994, spending four years working with Wang Zheng-hsiong (王正雄) and taking part in work on Banqiao’s Lin Family Garden, Qingshuiyan Ancestral Temple in Bangka, Taipei’s Xiahai City God Temple, and a number of others. Cheng Wen-wen (陳文文), the manager of the Xiahai City God Temple in Taipei, speaks particularly highly of Jin, remarking that he met him, Jin was still young, but he was diligent and serious in his work and showed great respect for the gods. After that, the two sides maintained a long-term cooperative relationship, and the temple also presented a plaque calling Jin Ming-wei a "Doctor for Deities." Jin says, "Deity statues are religious relics that are rich in life and have been baptized by history. Restoring them is like curing a god of disease."

According to Jin's restoration procedures, the process of repairing a statue must include cleaning, repairing, polishing, repairing the lines, fixing the gold inlays, decorating, and waxing. When cleaning, a damage assessment is also required to determine the best way to go about the repair work. Fixing the lines is done according to the existing lacquer or powder lines that make up the decorative pattern of the statue. The decoration process, meanwhile, is based on the original objects and colors of the statue, doing inlays, painting, and other details before beeswax is applied as a protective layer. During the restoration process, in addition to maintaining the original style, if the original decoration is unclear, Jin will discuss the approach with the owner of the statue and use different techniques according to the common methods used on such statues to bring out the details of it.

In addition to restoring statues to their former appearances, Jin says, it is also necessary to preserve the traces of the years they have seen. The most important thing is to "repair the old as old" rather than renovating like new, retaining the original charm of the statue after restoration. Such restorations require the craftsman to be able to distinguish and be familiar with the techniques of a variety of different schools and eras, and maintain each statue's particular style. However, various schools have evolved over time, and many techniques have been lost. Therefore, Jin relies on observing the patterns and workmanship of the statues, constantly thinking about how to preserve the original craftsmanship and restore the face and demeanor of the statues.

Jin Ming-wei has experience in the restoration of woodcut statues from various schools in Quanzhou, Zhangzhou, and Fuzhou. He has been involved in the restoration of statues of monuments such as Taipei Xiahai City God Temple and Luzhou's Baohe Temple, not only strengthening the statues, but applying different techniques to emphasize their artisanal origins. In addition, Jin has been passing on his restoration techniques to his son, demonstrating that he has the ability to both do and teach. In 2021, he was registered as a Preserver of Tangible Cultural Assets of New Taipei City for his work.