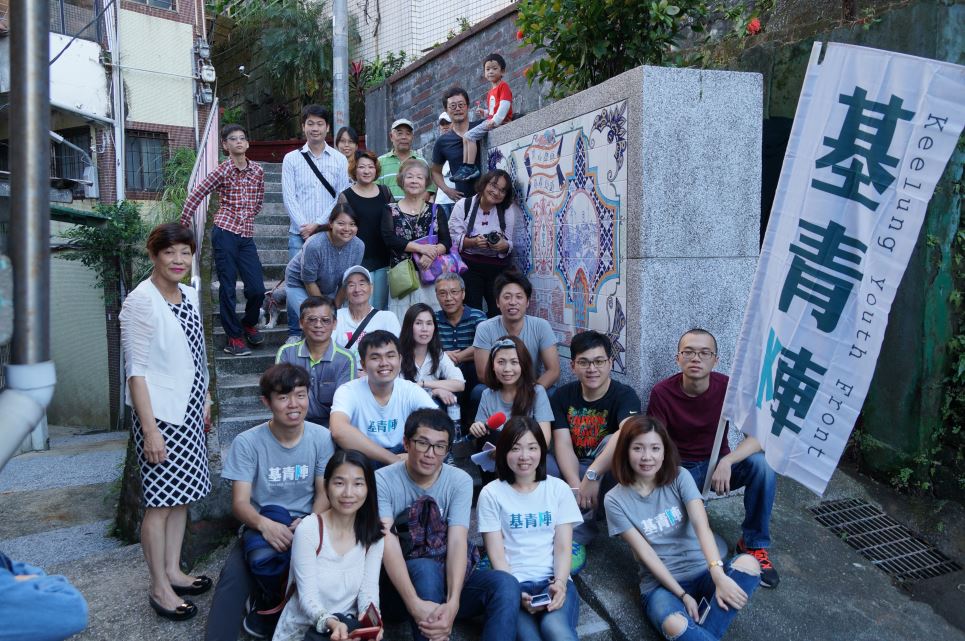 ‧ Chinese Name: 基隆青年陣線
‧ Established: 2014
‧ Location: Keelung City (Northern Taiwan)
Did You Know?
As a satellite city of Taipei, Keelung is very special. Its natural harbor saw Keelung become Taiwan's early gateway to the outside world, and as international business and trade boomed, Keelung enjoyed a period of prosperity. However, due to the small hinterland around the port, the number of containers that can be stored for transshipment after ships enter the port is limited, and between that and changes in East Asian freight routes, Keelung Port declined rapidly, and its past glory faded.

The Keelung Youth Front is a community-building and cultural movement NGO. It was established in 2014 when a group of Keelung youths was inspired by the Sunflower Movement to create a movement of their own in their hometown. In the beginning, the purpose of the organization was to bring together the power of the younger generation to contribute to the place where they grew up and motivate people to show interest in the issues that face their hometown.

The members of the Keelung Youth Front are young people in their 20s and 30s, ranging from college students to office workers. Membership is free, and the group raises a small amount of funds through applications to government programs. Through activities organized by the group, including community workshops, environmental clean-ups, and community rebuilding, they hope to create positive changes.

The first of their major activities started in August 2014, when the Keelung Youth Front called on some local associations to organize a cleanup campaign for the Khoo Tsu-song Old House. Khoo Tsu-song Old House is located near Keelung’s vibrant Miaokou Night Market. It was completed in 1931 and is a combination of a traditional Hokkien Sanheyuan, a house with a courtyard that is made up of three sections of living compounds, and a Japanese-style Western-influenced building. The owner, Xu Zisang, was a wealthy figure in Keelung during the Japanese period who served as mayor of Keelung District from 1913 to 1920. A lover of literature and art, he often hosted cultural salons in his house. However, after his passing, his descendants moved out, property rights turned out to be too complicated, and the home was abandoned. The Keelung Youth Front has cleaned up this historic site and returned the elegant old house to its former classical glory.

The dilapidated and abandoned old house was transformed through the efforts of many people. These young people hope that through the rescue of this old homestead, more people will see that Keelung is more than just a bustling night market and a beautiful seaport, but also has a rich heritage and precious cultural assets. Therefore, since 2015, the Keelung Youth Front has held the Zisang Cultural Festival here every year, training high school students and others to become cultural guides and interview writers. At the same time, they also hold local exhibitions, cultural and creative markets, and field study recording sessions to expand the cultural depth of Keelung, awaken the attention of Keelung citizens to historical buildings, and motivate everyone to come together to protect local cultural assets.

In addition to the Zisan Cultural Festival, the Keelung Youth Front also participated in the local Keelung Mid-Summer Ghost Festival celebrations, which date back some 150 years and is one of the 12 major local festivals in Taiwan. The members visited temple workers to record the traditional crafts and ritual processes related to the Mid-Summer Ghost Festival, facilitating the passing on to outsiders this unique piece of Keelung’s cultural heritage.

In recent years, the Keelung Youth Front has also focused on youth entrepreneurship and connecting with young people who are interested in returning to Keelung to work. They hope that in the future, cooperative efforts can be expanded so that young people who want to stay in Keelung can try more types of jobs, and even be able to work here, helping the city grow and develop steadily.