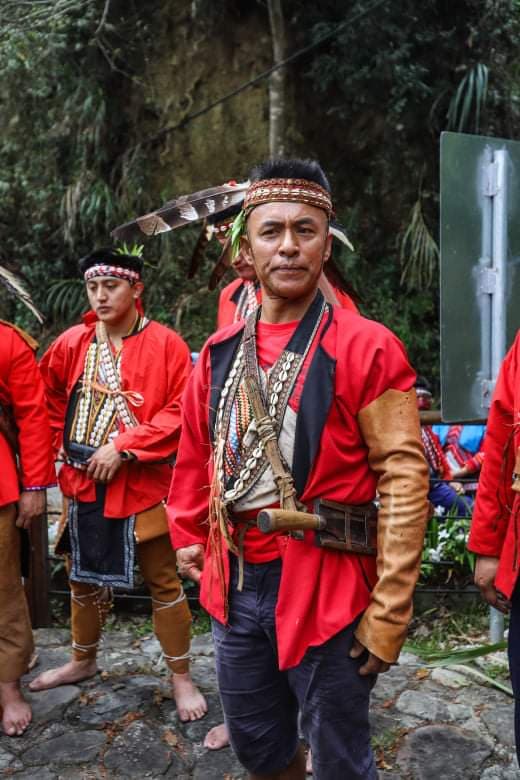 ‧ Chinese Name: 安孝明
‧ Date of Birth: 1979
‧ Place of Birth: Chiayi (Southern Taiwan)
Did You Know?
To help keep the culture of the indigenous Tsou people alive in Xinyi Township, Nantou County, the Nantou Forest Management Office and the National Taiwan University Experimental Forest Management Office cooperated with Mahavun Elementary School in 2021, inviting Mo'o Yasiyungu, a member of the Tsou tribe in Alishan Township, Chiayi, to bring together local indigenous youths to work on some traditional construction work. The resulting Tsou traditional building, known as a hʉfʉ, was completed and opened in early 2022, allowing the local indigenous community to see for themselves the reappearance of a Tsou traditional building that had not been seen for more than seven decades.

Mo'o Yasiyungu is from the Tsou village of Tapangʉ in Alishan Township, Chiayi County. A lover of the traditional culture of the Tsou people, he works to preserve the knowledge of traditional Tsou construction, something in which he has quite some hands-on experience. When Mo'o Yasiyungu was in his twenties, the township magistrate of Alishan Township wanted to build a "cultural center" for the Tsou people to display their cultural relics. At that time, people in the community began to discuss questions like "What kind of building should be built?," "What is a traditional Tsou building?" and "What is the culture of the Tsou people?" This made him start contemplating what a building with Tsou characteristics really was.

When he was a child, says Mo'o Yasiyungu, he lived in a bamboo house. He remembers pressing the bamboo into a flat surface and then flattening it to form a wall, then the roof being covered with bamboo and then with black oil paper to prevent rain from leaking in, but water would still eventually start to seep in. And in the event of a typhoon, heavy objects had to be put on the roof to keep the oil paper from flying away, and the interior was filled with soil to prevent the accumulation of rainwater in summer. Tracing back this traditional approach to architecture, he initially thought that bamboo housing must have been the traditional style of the Tsou people, but he later found out that that was actually something they picked up from the Hakka. And so, Mo’o Yasiyungu continued looking for traditional Tsou housing and buildings from an early age.

In 1996, he found a Japanese drawing of the architectural structure of a traditional Tsou family house in his late father's belongings. After digging into the relevant information, he learned that the picture was published by Suketaro Chijiiwa in 1937 for the Architectural Institute of Taiwan in an article entitled "Research on the Houses of the Takasago [Indigenous] People of Taiwan," specifically sectional drawings and floor plans of houses in Tapangʉ. The architectural details were supplemented orally by Mo'o Yasiyungu's aunt. Through the memories of his aunt, he was able to piece together the appearance of the house. Later, he saw a copy of "Segawa's Illustrated Ethnography of Indigenous Formosan People: The Tsou," in which he discovered details of the construction method that he had been otherwise unable to find. These details had been preserved for nearly 80 years through the photography collection, and they served as an important reference for rebuilding traditional houses in the following decades.

The traditional house, known as a hʉfʉ in Tsou, is a characteristic building of the Tsou people. The space of the house is very different from those of Taiwan's other ethnic groups, specifically reflecting the Tsou people's outlook on the universe, geography, and humanity. The cultural and social significance of the building rests on its leveled base, atop which traditional construction methods using local natural materials are employed, closely tying the building to the land. The location of the first hʉfʉ built by Mo'o Yasiyungu is where his family previously lived. In addition to rebuilding the original place of his grandfather's residence as a commemoration, building a house is also an action to connect the past and the present. Traditionally, the Tsou people lived in hʉfʉ, which served as bases for activities such as hunting, farming, sacrifices, and even funeral ceremonies. Furthermore, the building materials of traditional houses are all taken from nature, so it is vital to know when the plants can be harvested and how to use them properly.

The construction of a hʉfʉ is intensely tied to culture, so Mo'o Yasiyungu brings school children to the houses to teach them, as he believes that the culture taught in the school classroom simply can't give children a chance to be personally involved, which will lead to their cultural awareness gradually disappearing. But when they see the real thing and actually participate in its construction, their cultural awareness will begin to grow and accumulate. He personally built two traditional hʉfʉ in Viskiana (the old site of Tapangʉ) based on traditional construction methods. Over the longer term, Mo'o Yasiyungu is working with Alishan Junior and Elementary School, Dabang Elementary School, and Charshan Primary School to teach the local youth about the concepts and techniques involved in traditional Tsou construction.