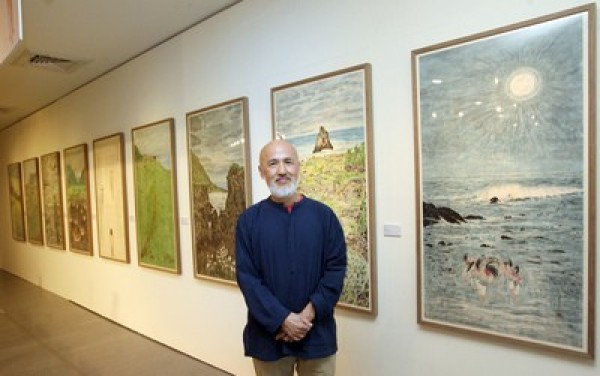 Lee Shien-wen is an entrepreneur-turned-artist who has persisted in his pursuit of the arts and the promotion of art education in Taiwan. In 2012, Lee was bestowed with a certificate of recognition from then Mayor of Taipei Hau Lung-bin (郝龍斌) for his contributions to the city's arts development.

Born to a well-off household that founded Lion Pencil Co., Ltd., Lee grew up with more of an interest in art rather than business. Though he was painting from an early age, he put his dream of becoming an artist on halt to fulfill his father's wish of working for their family business.

However, after working at his father's pencil manufacturer for six months, Lee decided to follow his passion instead of taking the road his father paved for him. Feeling that Taiwan lacked a professional art magazine more than artists, Lee proposed the idea of establishing a magazine to his father in 1971.

Despite knowing that running an arts magazine would likely not be profitable, Lee's father became one of the rare businesspeople who invested in culture at that time and helped Lee launch Lion Art Monthly.

With an exceptional focus on contemporary art, Lion Art Monthly introduced both international and local artists as well as documented Taiwan's artistic development from the martial law period to the post-martial law era. In its 25 years of running, the magazine helped cultivate deep-rooted aesthetics and appreciation for art in Taiwan.

Sensing the rise of the cultural industry and art as a profitable business after the 1990s, Lee decided to stop the publication of Lion Art Monthly to prevent over-commercialization of the magazine.

In 1996, Lee moved away from the hustle of city life and resettled in a quiet area surrounded by nature in Taoyuan to become fully immersed in painting. Lee also traveled to several countries, including India, Tibet, and China, in seek of inspiration.

Lee once expressed "what gives us power and touches our soul are those people waiting to learn about our lives.” Combining western painting and calligraphy skills he had acquired earlier, Lee paints his observations on life, people, society, and nature into pictures to express his philosophy on life.

Now in his 70s, Lee has answered his vocation as an artist and continues to promote his idea of art as part of everyday life through his paintings.