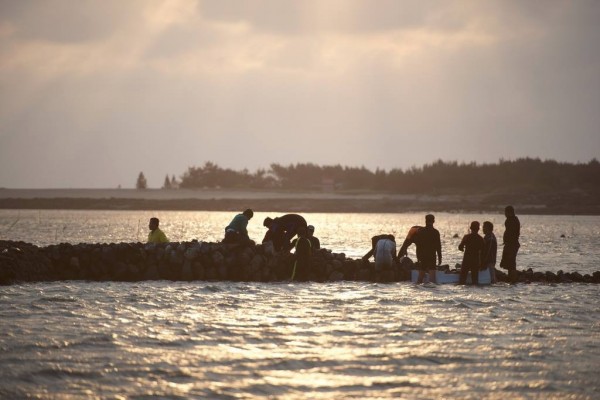 The Jibei Stone Fish Weirs Preservation Team has made it their objective to restore the disappearing stone fish traps that have become an unofficial symbol of Taiwan's outlying Penghu Islands. Comprising seven members from Jibei Islet, the team has been designated as "national living treasures” by the Ministry of Culture in 2010.

The stone fish weir is one of the most iconic cultural heritage sights in Penghu. Before the emergence of motor boats, stone fish weirs were valuable assets with which Penghu residents caught fishes and made a living in a region where resources were limited.

Though it is known as the "hometown of fish weirs,” Jibei Islet have lost many of such structures due to lack of maintenance and decline of the local fishing industry. The traditional method of catching fish may have been replaced by mechanical power today, but the fish weir reflects the ecological lifeline, the early ecological engineering, and the local wisdom of the island's ancestors.

Spearheaded by local senior citizens Ke Jin-duo (柯進多), Lin Wen-zhen (林文鎮), Chen A-bin (陳阿賓), and Yu Xi-liang (于錫亮), the team was founded in 2004. To extend the scale of their preservation work, they then established the Penghu Marine Cultural Association by collaborating with the National Penghu University of Science and Technology, relegating the Jibei Stone Weirs Preservation Team as a subordinate unit of the association.

To save the local cultural heritage from disappearing, team members have learned how to repair damaged fish weirs. Since Penghu's weirs are constructed by interlocking stones or coral reefs without using any artificial adhesives, restoration requires hard work and professional knowledge and working experience of tides, weir construction, and seasonal elements.

Today, more than 50 stone fish weirs in Jibei Islet have been repaired. In addition, the team is working with the Penghu National Scenic Area Administration to establish the Jibei Stone Fish Weir Cultural Center (吉貝石滬文化館) to further conserve the fish weir culture.

Over the years, the team has also been sharing their skills in repairing and conserving stone fish weirs with the public, passing down valuable knowledge to members of the next generation in a bid to preserve both the tangible and intangible assets of Penghu.