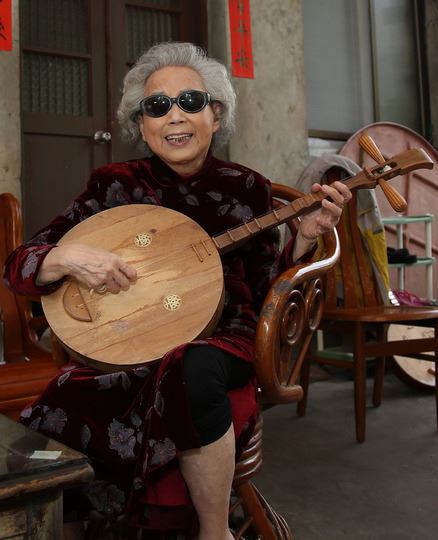 Yang Xiu-qing is one of the last remaining professional chant-singers in Taiwan and a major promoter of the Taiwanese-language gezai narrative song form. With her exquisite technical skill and rich background in chant-song history, Yang has had a profound impact on the continuation and preservation of this traditional art.

Born in Taipei in 1934, Yang lost her sight in both eyes at age four as the result of an untreated cold-like illness. At the age of 10, she was adopted by the Hsiao family in Keelung, where her adopted sister Hsiao Jin-feng — also blind — taught her chant-song and how to play the moon zither, or yueqin. The two sisters began their careers as singers when Yang turned 13. The pair toured restaurants, tea houses, temples, and parks, performing duets that broke away from the traditional solo form.

In 1956, Yang married Chen Zai-xing, who left his work as an automotive mechanic and took up a two-stringed instrument known as daguangxian. The two traveled and performed together, him accompanying her as she played yueqin and sang.

Yang’s specialty is long-form stories, although she is also skilled in improvising short songs of encouragement and well-wishes. For the narrative songs, Chen plays daguangxian for atmosphere as the two weave folk tales of love, chivalry, and myth. The combination of her lyrics with folk and various traditional theatrical musical styles set down a firm foundation for Taiwanese chant-song.

Then in 1957, in order to draw in bigger audiences, Yang began to shift styles into "narrative gezai," weaving spoken narrative sections in between musical pieces to create a part-sung, part-spoken long-form narrative style.

For a period she set up in the Taipei Circle area of the capital, singing gezai or nanguan operatic pieces before improvising a chant-song tale based on local elements. For these, she would take dramatic dialogue as her narrative blueprint and then mold it into a chant-song form.

Such efforts proved popular, and it was through them that Yang built her reputation for "narrative opera." In 1969, Ming Pen Broadcasting began to play Yang's chant-songs on air. With a steady paying job, life started to settle down for her and her husband, and together they recorded several albums. At peak popularity, some 13 different stations nationwide were playing her records.

Yang has a unique ability for playing multiple roles by changing up her voice and delivery nimbly. She also has a talent for both memorization and improvisation. At the outset, her songs employed a single musical style per track, but later she developed an approach wherein she would mix up different styles, something closely related to her own listening habits.

Her late-period pieces have built on a foundation of classics by making extensive use of folk songs, Taiwanese opera pieces, and nanguan music, making for an even more vibrant form of chant-song. On top of that, no piece is ever set in stone, with Yang changing up melodies and, with a focus on both narrative and song, nimbly reinterpreting her tales to fit the situation.

Her music has been as well received by both ethnomusicologists and the public. In 2003, she was honored with a lifetime achievement award from the General Assembly of Chinese Culture; four years later, she won a National Award of Art; and in 2009, the Council of Cultural Affairs (now the Ministry of Culture) named her an "Important Preserver of Traditional Chant-song Art."

To help keep the art alive, Yang has spared no effort in promoting it in recent years, accepting invitations to campuses around Taiwan to perform, taking part in public performances, and taking on apprentices to whom she can pass on her wisdom.

Despite her advancing age and the physical frailties that come with it, Yang is as committed as ever to the tradition of chant-song, striving to stoke the fires of the art in the hearts of a new generation. Her apprentices will be the future lifeblood of Taiwanese chant-song art.