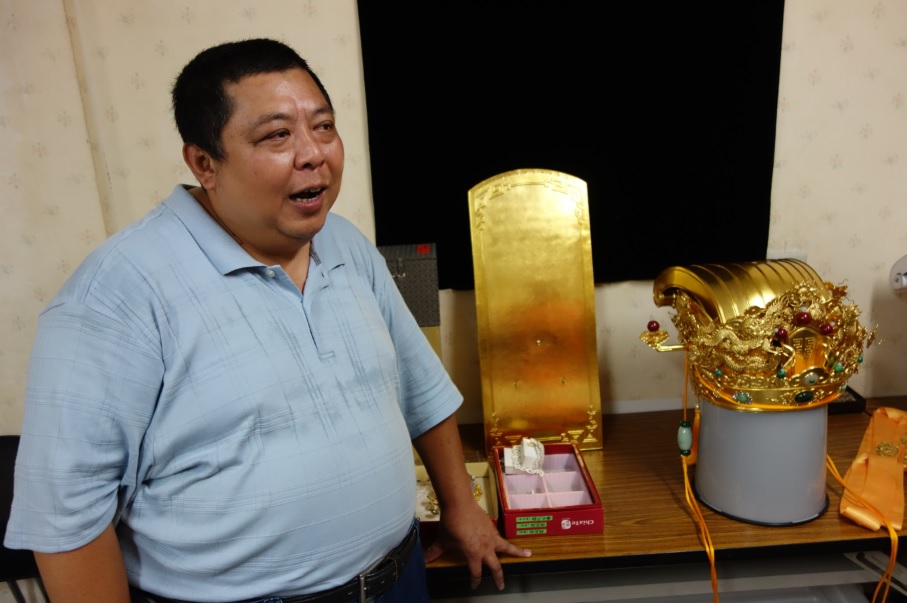 Kao Chi-shun, of Tainan, is an artist who specializes in making paper crowns for holy figures. Combining this traditional art with modern methods like CAD and laser cutting, his paper-and-foil pieces are detailed, delicate, and refined, with an emphasis on three-dimensionality and layers. In 2016, he was named an official preservationist of paper crown art for Tainan City.

The paper crowns used for holy figures are much like those used in traditional theater, both stemming from the same tradition of ornamentation and extravagance. The crowns produced in Tainan largely continue to employ ancient methods, coming in a rich variety forms and styles. The crowns are assembled in a number of styles, including "nine honored dragons," "twin phoenixes," "peony," "auspicious gems," and "pagoda" styles, but there are no particular demands for the patterns they are decorated with, which instead focus on filling the space and creating a sense of spectacle.

In a past career, Kao was the CEO of a hand-tools company. Then, at a ritual offering held to thank the gods, he became intrigued with how the paper crowns were made, and decided to switch careers. He set up his business, Hanming Hall (翰明齋), and is now wholly dedicated to the production of paper crowns as he set out on this new phase of life.

The paper crowns Kao produces are brimming with his own personal style. While following traditional techniques, he also integrates modern minimalist aesthetics, creating a fusion of tradition and innovation. As well as communicating closely with his clients, Kao also consults with the gods in question, aiming to produce pieces that satisfy him, his client, and the god or gods alike.

To promote the traditional art of paper crown construction, the Tainan City Government and a number of local cultural organizations often invite Kao to give talks and live demonstrations, stunning those in attendance and giving them the chance to see this important and fascinating Taiwanese custom first hand.