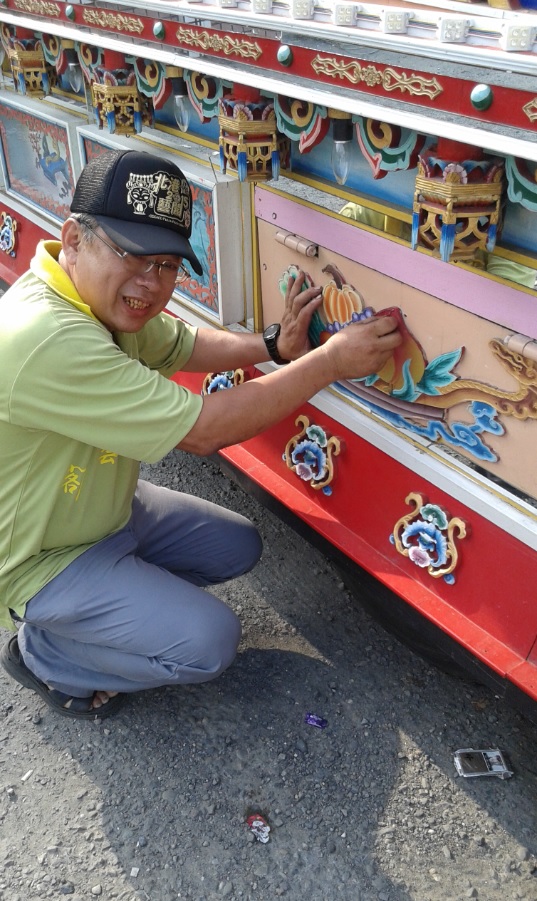 The traditional art of yige, which is often used to celebrate the birthday of the goddess Matsu, has a history that stretches back centuries. Yan San-tai, Yunlin County's yige master, learned it from his father and has worked to incorporate folktales and spectacular light-and-sound effects to take it to a new level. Over the years, traditional hand-crafted floats have gradually been supplanted by mechanical vehicles adorned with flashy electronics, in response to which Yan and his wife have redoubled their efforts to preserve the increasingly uncommon traditional version.

Commonly seen in temple processions, in its earliest forms yige involved palanquins or young actors carried manually, evolving over time into parade floats and modified trucks. "There are records of yige as far back as the Han dynasty," noted Yan. "At first they were palanquins, but by the time of Japanese rule they were pulled along on carts, and then later they changed to what we see now."

Yunlin's Beigang Township is the original home of the modern electronic floats, Yan says, adding that there once were water-based ones as well that drew huge crowds from all over Taiwan every Lunar New Year. He recalled that in the past, those who wore flip-flips to the crowded celebrations usually returned home barefooted. However, folks today have to travel far to witness such a spectacle.

When the parades were at their peak, Beigang was home to some six or seven float-making places, whereas today it is down to just Yan and company, with no more than 10 places nationwide.

Making these floats requires a great deal of effort and resources, and sponsors moving to the electronic versions dealt a substantial blow to the traditional artists. "Yige is a combination of a number of crafts, but with the new style that uses converted trucks and flashier features, it's natural that sponsors for our style are dropping off. Nevertheless, I'm sticking with the tradition," he said.

In doing so, he has partnered with government agencies to bring a touch of tradition to cultural and creative events. His wife has also been an invaluable source of support. "His family has passed this down through generations, how could I say no?" she stated. "And if I did, it would be a shame to let so much just vanish. This is the kind of business that cannot be done alone; you've got to work together. If it were just him it wouldn't work, and if it were just me, that wouldn't fare well either."

Many traditional arts get left behind as time moves on. Artisans like Yan invest a lot of effort in preserving culture to ensure that arts like yige will not vanish completely and join those others long since forgotten.