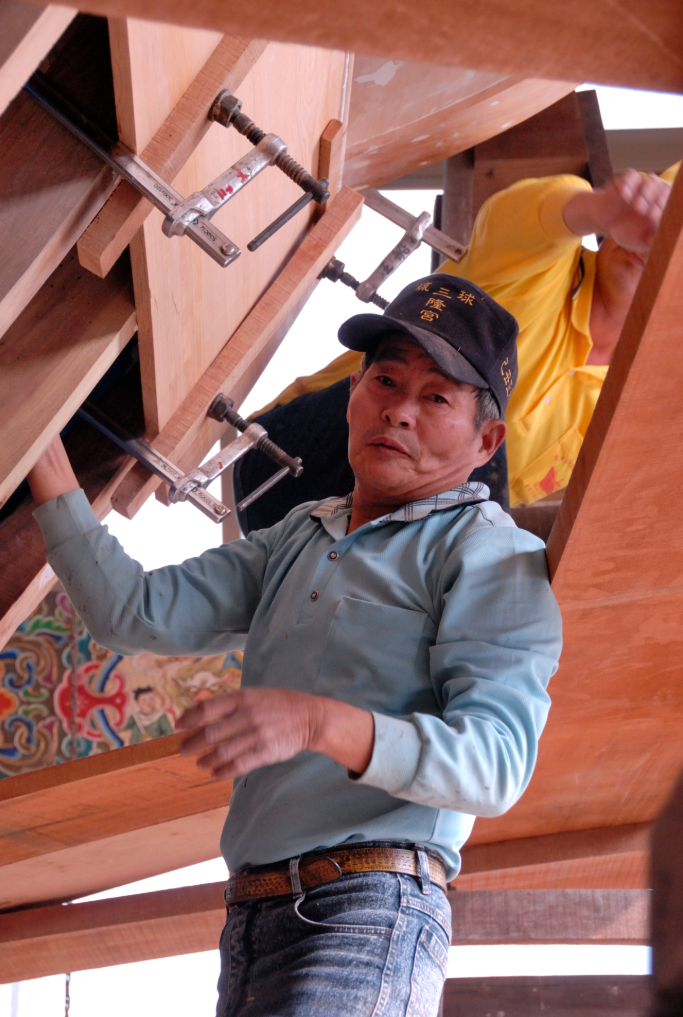 The Donggang King Boat Ceremony is a significant folk activity only held in Pingtung for Taiwan, but the burning of the boat is a well-known practice across the island. The wooden boat is not just a crucial religious instrument in this ceremony but also a preservation of the core artistry for building with such traditional techniques.

The sixty-some Tsai Wen-hua (蔡文化) is one of the few living craftsmen in Taiwan knowledgeable about how to build the wooden boats and familiar with all aspects of the process, including the history of the ceremony, the structure of the boat, and the manufacturing artistry. This knowledge has won him the nickname "walking dictionary" of his industry.

The Donggang King Boat Ceremony of Donglong Temple is a triennial event held at Donggang Township of Pingtung. It was recognized as an important national folk festival in 2010 thanks to its two century-old history.

Also known as Qiansui Ye (千歲爺), meaning "the thousand-year-old lords," the Wang Ye deities are said to be commanded by the Jade Emperor to descend to the mortal world to survey the good and evil of the world and expel plagues and devils in missions that Daoists call "Patrolling the Mortal World on Behalf of the Jade Emperor."

The ceremony is devised to receive the five Qiansui Ye sent by the Emperor, and send them back to the Heavenly Court on the boat loaded with large piles of spirit money in the form of burning them all after eight days of celebration. Hence, building the king's boat is regarded as a sacred job.

In the olden days, king's boats were constructed from papier mâché, which was much less costlier than wood given that Taiwan had limited resources at that time. Once Taiwan began to enjoy a measure of prosperity in 1973, worshipers began replacing the old papier mâché boats with solid wooden vessels in full size measuring at 15 meters long, 4 meters wide, and 2.84 meters high.

Inside the boat are boatmen, cows, goats, chickens, and daily supplies made out of wood, which represent the offerings for the five Qiansui Ye. On the exterior there are intricate decorative paintings and swanky sails, showing the faithful followers' sincere and pious attitude towards the deities.

Born in Liuqiu Township (琉球鄉), Tsai is currently the chief executive of the king's boat design on Donglong Temple's (東隆宮) Donggang King Boat Ceremony committee. He went to Donggang after graduating from elementary school to learn boat-building skills from his uncle by helping him fix fishing vessels during wintertime. In the summers, he went back to Liuqiu to catch fish.

He did not begin to take orders himself for building fishing boats until he was 30 years old and only entered the king's boat building business in 1979. At the very beginning of his boat-building career, he simply worked as an assistant until he became familiar with all aspects of the manufacturing process to be called as a master. Over the past forty years, he has participated in 13 king's boat projects.

The sixty-some Tsai Tsai-an (蔡財安), Tsai Wen-hua's peer, said his father was a king's boat craftsman specializing in making sails and had taken part in seven to eight king's boat projects. His son Tsai was involved in four projects. He said in his father's days, king’s boats were built at places closed to the public. That tradition had kept going until around 20 years ago, when people were allowed to visit or take photos of the workshops but forbidden from taking a closer look.

In 2018, the Pingtung County Government held a cultural heritage conference to list the two craftsmen as "Cultural Heritage Preservation Techniques and Preservers" in recognition of their great contribution to the preservation and inheritance of king's boat construction techniques.

The two Tsais noted that building the king's boat is voluntary work, which is less attractive for young generations to take on. Since the two craftsmen have long been involved in constructing solid wooden king's boats, they have become very revered in the industry in terms of technique, cultural inheritance, and manufacturing artistry, and remain helpful in preserving the national-level Donggang King Boat Ceremony.

In order to pass down the artistry for making these boats, Donglong Temple has opened a hall for displaying king's boat culture and invited the two Tsais to build a model boat at half the size of a typical king's boat. The hall also provides texts and photos to elaborate on how a king's boat is built.

Hsieh Chen-lung (謝政龍), an official of Donglong Temple's publicity division, pointed out that the smaller king's boat showcased in the temple will be used as a sample for later general woodworkers to emulate for the ceremony if there is no one willing to learn the skills now. The temple began digitizing all of its filed documentaries on the king's boat ceremony last year as well to preserve such collections for future displays.