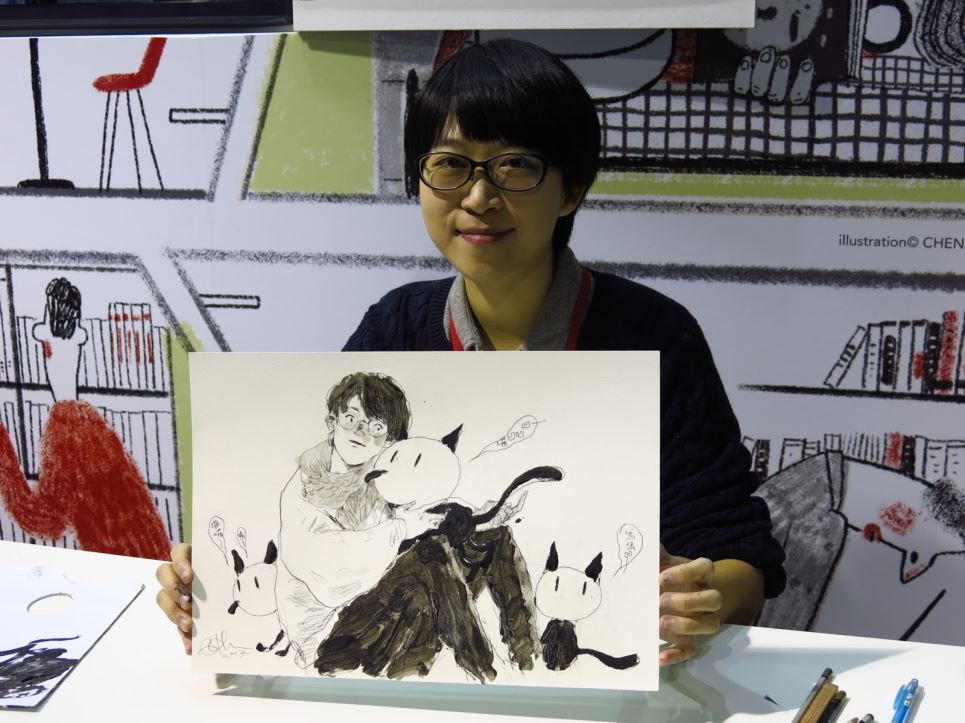 Comic artist Liu Yi-chi, also known by the homophonous penname 61Chi, is a quick, clear thinker who makes no effort to hide her like or dislike of things. She published her first collection of illustrations in 2007, and has gone on to self-publish more than 10 books thus far. She also accepts commissions from both publishing houses, for whom she does illustrations and novel covers, and private clients.

Liu's works span a range of styles, from children's illustrations and American realism to Japanese aesthetics. Engaged in design, art, and photography, Liu has a wealth of experience taking part in exhibitions and receiving awards despite her relatively young age. By 2013, she was already publishing her own works, along with making merchandise like washi tape, notebooks, and even wall hangings.

In 2014, she published her first standalone work, "Room (房間)," which draws from her observations of life in the apartment buildings of Taipei. Apart from winning silver at the 8th International Manga Awards in Japan, "Room" was also nominated for the 2015 Taipei International Book Exhibition Awards and recommended as an "excellent publication" at that year’s Golden Tripod Awards.

A young artist with tremendous international potential, she has represented Taiwan three times at the Angoulême International Comics Festival (in 2012, 2014, and 2017), participated in a 2014 project titled Graphic Exchange Between Taiwan and New Zealand, and selected by the Ministry of Culture for a 2016 residency at Egon Schiele Art Centrum in the Czech Republic.

"Small Town, Southern Time: Zuoying & Český Krumlov (南方小鎮時光：左營‧庫倫洛夫)" is a collection of Liu's pieces from her time in the Czech Republic, deliberately not organized geographically, but rather mixing together images of scenes and people from Český Krumlov and Kaohsiung's Zuoying region. The book won the Best Cross-Media Application Award at the 2017 Golden Comic Awards.

In 2017, the Taipei Cultural Center in New York invited Liu and fellow rising comic star Crystal Kung (水晶孔) to participate in the MoCCA Arts Festival, a Manhattan festival focused on independent comic and cartoon artists, as part of ongoing efforts to cultivate a market for Taiwanese comics on the US East Coast.

In 2018, Liu was invited by the Ministry of Culture to join well-known picture-book artist Lee Chin-lun (李瑾倫) as part of the Taiwan Pavilion at the Guadalajara International Book Fair, the largest book fair in the Spanish-speaking world. There, she helped spearhead Taiwan's foray into the Spanish-language publishing market through book signings, portrait sketches, and forums.

Liu has always tried to combine the aesthetics of art and design in her comics and illustrations. In 2019, she published her latest work, "Sometimes in the City (城市裡，有時候)." Unlike most narrative comics, this book makes use of cinematic long shots to depict scenes without dialogue, as well as other distinctive panel layouts to offer a new reading experience for comics fans.