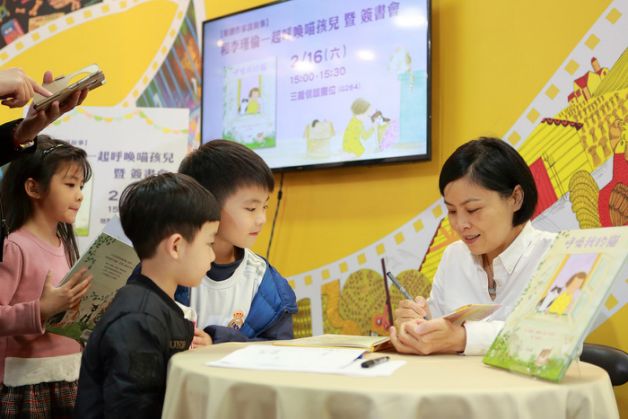 Lee Chin-lun, whose father was a teacher of industrial design, had a talent for drawing from a young age. One day Chao Kuo-tsung (趙國宗), who was recognized as the "master of fairy tales" of Taiwan, asked the young girl if she would work as a picture-book illustrator like him when she grew up. She nodded with a pure grin and said she would "draw until the end of the world." Lee has kept that simple promise in her mind ever since, letting it grow stronger and stronger.

Lee graduated from university just after censorship laws on newspaper publications in Taiwan were lifted. Shortly after, she found an art editor job at the Children's Daily, where she was exposed to picture books from across the world. With the experience she gleaned at the Children's Daily, Lee, who was not a fine art graduate, went to Japan for advanced studies in illustration. Before long, she had published several works there.

In 1997, Lee went to the Royal College of Art in the United Kingdom for an MA program in illustration. Her picture books were displayed at her graduation show and immediately caught the eye of staff at Walker Books, a top British independent publisher of children’s books. Walker signed Lee in 2001 as its first cooperative creator from Asia by publishing her "The Very Kind Rich Lady And Her One Hundred Dogs."

As Lee's first English picture book, it was later translated into Japanese, German, Dutch, Spanish, and Korean. Since then, Walker has also published Lee's other creations, including "Good Dog, Paw" and "Totally Wonderful Miss Plumberry."

Walker even contracted British writer Michelle Robinson to write a story especially for Lee, which became a picture book about a young girl and 103 cats. Named "The Pawed Piper," it was published in late 2018.

For over 10 years, Lee made regular visits to primary schools in the eastern Taiwanese counties of Hualien and Taitung to tell stories. Whenever she met these children, she also brought them stationary including writing mats, pencils, and notebooks, all decorated with the characters from her work "What Chubby Cheeks Taught Me." With these gifts gaining popularity among children, Lee began building her brand name "Chinlun."

Shortly after establishing the brand, Lee opened her studio, which she named "Bobojyu" after her two cats, Bobo and Jyu. The studio has opened many gift stores in Kaohsiung thanks to its exquisite decoration and trendy artistic merchandise. It was an unexpected expansion from the original store, which sold only Chinlun-branded merchandise and Lee's favorite postcards.

Seeing her brand name and store operations growing steadily, Lee has decided to focus on creating picture books again, submerging herself in the joy of producing artistic works. Her dedication serves as a reminder of the vow she made when she was a young girl.