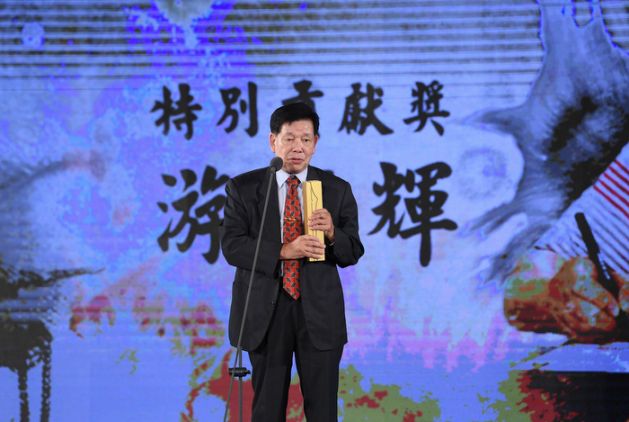 Yu Long-hui was one of Taiwan's most influential wuxia comic artists of the 1960s, with the scene said to be dominated by Yu in the north and Hsu Mao-sung (許貿淞) in the south. With his counterpart Hsu having been honored with a Special Contribution Award at the 2017 Golden Comic Awards, one can see the weight that Yu carries in the comic world.

From today's perspective, one can see how his dramatic art style was comparable to the well-known Japanese artists of the time, but mixed with distinctly classic Chinese wuxia themes. Placed in context within the nation's history of comics, his works are representative of the early development of a Taiwanese style.

The 1960s were a golden era for Taiwanese comics. Martial law meant there were many topics one could not touch on, and so a number of comic artists turned to wuxia, creating a number of the classics for the genre.

When he was 16, Yu first encountered the works of Chen Hai-hong (陳海虹), particularly his popular "Little Hero, Dragon Whirlwind (小俠龍捲風)." Yu was bowled over and immediately set his mind to leaving school and learning to draw comics from Chen. Because Yu's family was poor, by drawing comics he was able to make some extra money to help make ends meet.

At 17, he launched one of his most iconic works, "Hatred Divides the Dabie Mountains (仇斷大別山)," which went on to be a nationwide best-seller. The sales of his comics enticed publishing houses to Yu's door, and as soon as one comic was done, the publishers would immediately fall all over themselves to snatch up the next one.

During his peak, there were some 35 comic clubs named after him across Taiwan. Letters flooded in from readers at home and abroad, with Yu's popularity having spread to the Philippines, Hong Kong, and the overseas Mandarin-reading community.

Despite his youth, Yu was a leader in wuxia serials, with title after title, from "Whirling Blade (迴旋刀)" and "The Snake Ring (蛇戒)" to "God of Blades (刃神)," receiving widespread acclaim. By Yu's own admission, he was probably the youngest comic artist to make it big in Taiwan, and at one point he was making enough money from comics in a month to buy a house.

Unfortunately, all good things must come to an end, and in the 1970s, the comics review system established by the National Institute for Compilation and Translation (國立編譯館) critically restricted the artistic freedom of comic creators. By the time Yu finished his compulsory military service, Taiwanese comics had been clamped down on hard by the authorities, who made it so hard for Yu that he ended his comics career.

He went on to join Wang Film Productions (宏廣公司) as an art director during a boom time for Taiwanese animation companies doing proxy work for American and Japanese animation houses. Among the works Yu was involved with during the 1980s was doing the background animation for "The Smurfs," which won a Daytime Emmy.

While his heart has always belonged to wuxia comics, Taiwanese readers have already become more accustomed to Japanese manga, making his dream of recapturing that past popularity a substantial challenge. More recently, Yu has become known for his work as a paper sculpture designer, setting new career milestones in a life of nonstop creativity.