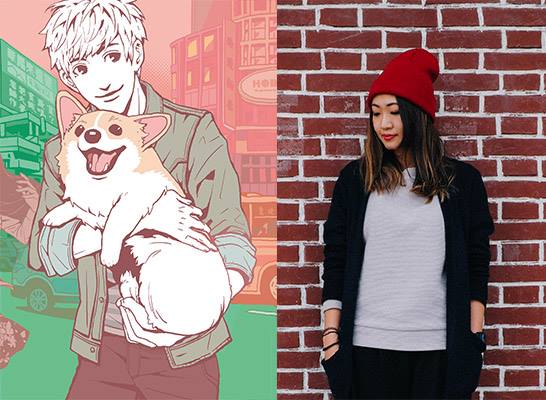 HOM (鴻) is an emerging comic artist, part of the breakout generation of younger artists who have begun re-shaping the landscape of Taiwanese comics. She has won numerous awards and her signature style is to depict the simple, everyday lives of regular folks. Readers will find their daily routines, emotions, and dreams in her relatable comic stories.

HOM is an arts major who has been recognized for her natural talents beginning from a young age. However, Taiwan's art education places more emphasis on watercolors, illustrations, calligraphy, and traditional Chinese paintings, while deeming comic and manga drawing to be less distinguished. HOM struggled with not having the freedom to focus on the drawing techniques of her interest, however she realized she had to prove herself first. Thus, she temporarily put down her comics-drawing pen, devoted herself to obtaining the required illustration techniques, and went on to graduate with top honors in the art program.

After attending Chinese Culture University and then working for a media design company, with pressure of entrance examinations eliminated, and a source of steady income secured, HOM felt she could finally pursue her real passion and began to draw manga sketches again. Together with a friend, she drew "Save the Message (追尋者)," and won a Golden Comic Award for Best Up-and-Coming Artist in 2011. The category has since been changed to Best New Talent Award.

She then went on to self-publish her own pieces, titled "Beautiful Strings" and "PROZAC." HOM observed that while many comics were mainly focused on fantastical or historical stories, there were none about the simple, bittersweet lives of regular people. So, in 2013, she launched the "Big City, Little Things (大城小事)" series on her Facebook page, immediately amassing a large fan base with over 60 thousand likes.

HOM's brilliant use of contrast and narration to pace readers brings emotional depth to the characters in her stories. Readers frequently comment that HOM's works are relatable and therapeutic, providing solace to their monotonous, wearisome lives. "Big City, Little Things" grew in popularity online, and a publishing house offered to have the collection published into a book. After its release, HOM quit her media design job and became a full time professional comic artist.

In 2015, HOM won gold prize at the Comico Competition for "Birthday Present (生日禮物)," followed by nominations by the Golden Comic Awards for her "Big City, Little Things" volumes 1, 2, and 3 in 2016 and 2017. In 2017, the Taichung City government asked HOM, a Taichung native, to draw a mural at the Chung-Ming Elementary School Station of Taichung's Bus Rapid Transit (BRT). The colorful mural depicted the principal food, culture, people, and history of the central metropolis.

That same year, HOM was selected by the Ministry of Culture to join an artist-in-residence program in Angouleme, France. During her residency, HOM worked on "Flying to the Other Side (飛到地球的另一端)," a story about a man from Taiwan who accidently falls into a wormhole and finds himself in France. Each chapter describes the different people and events encountering him as he makes his way back to Taiwan.

HOM's next project was an interdisciplinary piece with Golden Bell Best Screenplay-winning scriptwriter Ko Yen-hsin (柯雁心), called "The Actor (魔幻時刻)." "The Actor" is an original comic story based on the true experiences of young actors — their hardships, frustrations, and personal growth at the performance school "Q place." "The Actor" was named Best Comic for Young Adults at the 10th Golden Comic Awards in 2019.

Additionally, in 2019, HOM was invited to attend Frankfurt Book Fair with the Taiwan Pavilion delegation and helmed a seminar on "Comics About Life" that received an enthusiastic response from the attendees.

"Big City, Small Things" is now at its fourth volume, and the focus of HOM's work has gradually shifted from personal topics to examining social phenomena and communicating different perspectives. HOM believes that artistic creation is about understanding other people, the society, and social connections. She believes that comics is not only about delineating dreams and fantasies, but also about celebrating a slice of ordinary life and communicating with the world.