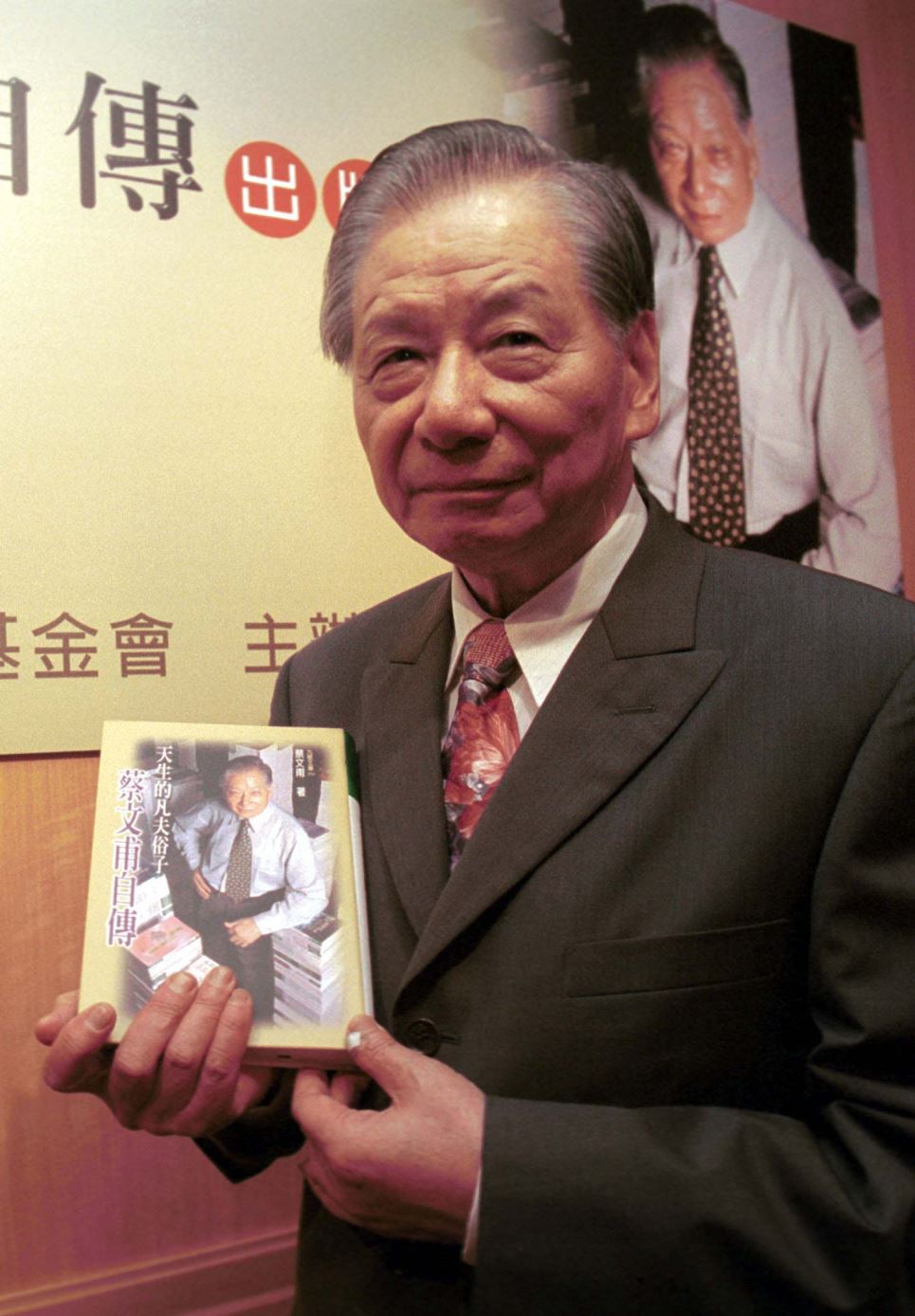 Name: 蔡文甫
Date of Birth: July 19, 1926
Died: July 16, 2020
Place of Birth: Yancheng, Jiangsu, China
Did You Know...?
For years, the early 20th century literary classic "Ulysses" by James Joyce was translated into more than 200 languages, but no Chinese version. To fill in the missing, Tsai Wen-fu (蔡文甫), founder of the Chiu Ko Publishing Company, overcame many difficulties and finally in 2005 accomplished the huge task to publish the Chinese translation.


Writer Xiang Yang (向陽) once referred to Tsai Wen-fu (向陽) as "the helmsman of promoting contemporary Taiwanese literature," having helped guide literature in Taiwan to an unprecedented peak in the 1980s. Tsai's early life was difficult, having lost his mother at a young age, and at the age of 24, he came to Taiwan with the Nationalist army in the wake of the Chinese Civil War. Not even completing his junior high education and having virtually no qualifications to speak of, he could only serve as a low-ranking officer at best. However, he never let the harsh environment frustrated his dream of studying and writing. Under the nom de plume Ding Yu, he published his debut work "Hope (希望)" in the supplement of the China Daily News (中華日報) . This successful first taste of publication light up his aspiration for writing.

Tsai went on to take the civil service exams, partly out of a desire to work as a civil servant, but also partly out of a desire to make up for his regrettable lack of academic qualifications. Later, through the recommendation from a friend, he took on the position as dean of the Chung Hwa Art Correspondence School. A year later, he also took up teaching positions at Daxi Junior High School and Xizhi Junior High School in Taoyuan. At the same time, Tsai continued working hard in pursuit of his dream of being a writer. While he didn’t receive any payment for them, he continued to publish pieces in Literature Magazine (文學雜誌) and Modern Literature (現代雜誌). In the meantime, he published three novels, namely "The Thaw (解凍的時候)," "Girls' Dormitory (女生宿舍)," and "A Theater with No Audience (沒有觀眾的舞台)."

1971 was a year of particular appreciation for Tsai Wen-fu, as he was made editor-in-chief of China Daily News supplement. He began changing the content of the supplement as soon as he took up the job, aiming to increase the diversity of the content and boost readers’ interest in newspapers. He extensively sought out writers at home and abroad to write for the newspaper. He also attended various art and cultural activities to write related articles himself. In 1986 and 1988, he was awarded the Supplement Editor's Golden Tripod Award twice by the Government Information Office, Executive Yuan (now Department of Information Services, Executive Yuan). Over his 20 years as supplement editor-in-chief, Tsai made friends with many outstanding writers, including Liang Shi-qiu (梁實秋), Chen Ruo-xi (陳若曦), and Yu Kwang-chung (余光中), laying the foundations for future publishing contracts.

In 1978, Tsai Wen-fu founded Chiu Ko Publishing Company (九歌出版社), focusing on the publication of literary works. For a while, it was like burning the candle at both ends, working on the supplement during the day and compiling books for publication at home. In addition to classic literary works, he was also committed to cultivating young literary talents, starting Taiwan's only literature awards and writing classes focused exclusively on children. On top of this, Chiu Ko Publishing would also publish the early works of many writers who would go on to become very well known, including Wu Ming-yi (吳明益), Yang Fumin (楊富閔), Hao Yu-xiang (郝譽翔), and Chong Yee-Voon (鍾怡雯). Eventually, the company expanded its scope, and over the years, Tsai oversaw the publication of over 2000 books for readers, young and old alike.

There are many stories about Tsai that circulate among Taiwan's literary circles. Zhang Ji-gao (張繼高), for example, was a figure of some renown in music culture, and Tsai was so convinced of his talents that despite Zhang's insistence on not writing a book, Tsai hounded him so persistently that he relented. Eventually, Zhang, despite having cancer, compiled his works into a book for Tsai, and that book went on to receive rave reviews from readers. Tsai won a number of awards for publishing over the years, as well as the Special Contribution Award at the 29th Golden Tripod Awards.

Although the publishing industry has been declining in recent years, Chiu Ko and Tsai remained firm in their conviction. On July 15, 2020, Tsai Wen-fu passed away at National Taiwan University Hospital after a long life dedicated to the promotion of Taiwanese literature.