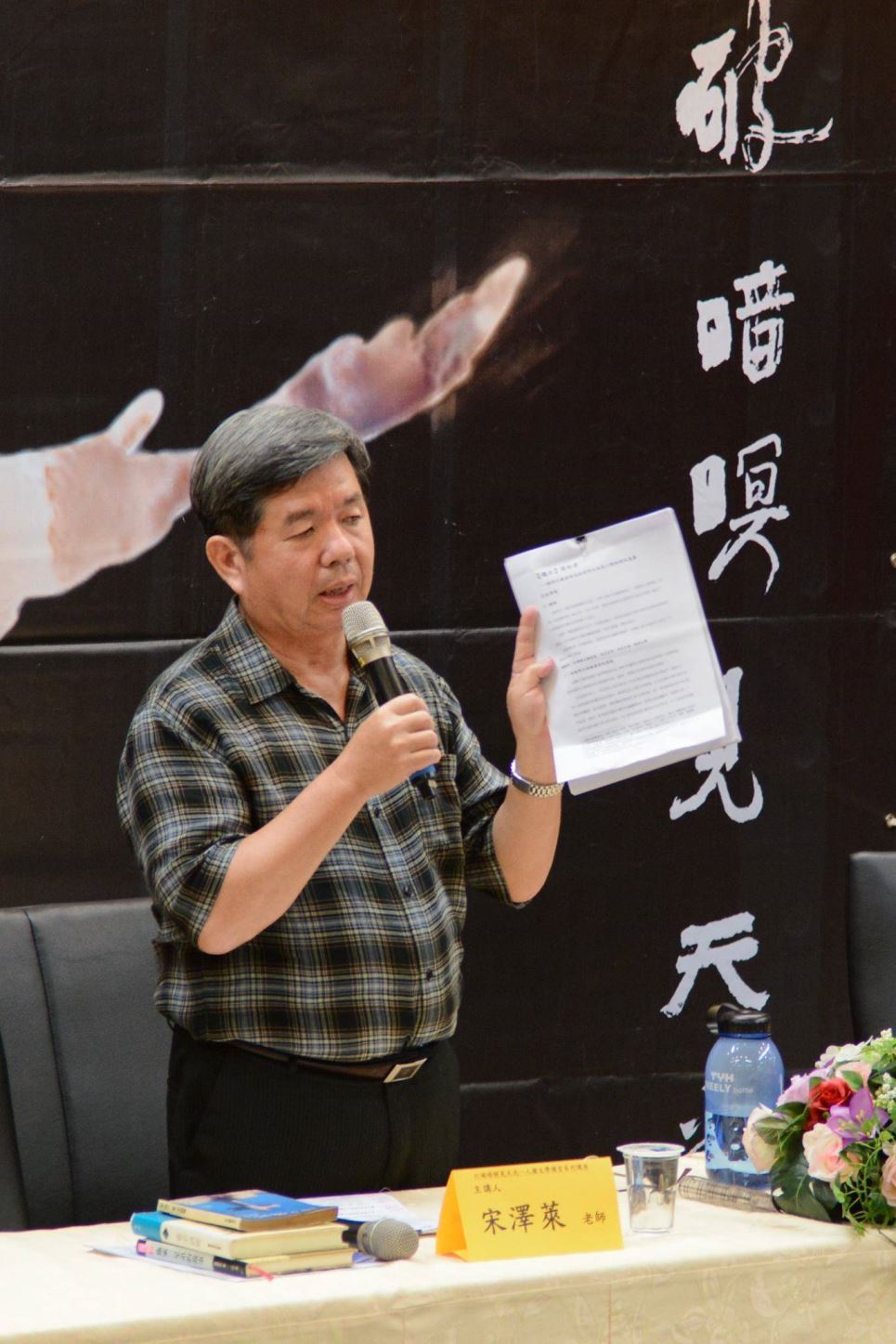 Name: 宋澤萊
Born: 1952
Place of Birth: Erlun Township, Yunlin County
Did You Know...?
Sung Tse-lai achieved considerable fame as a young man, winning numerous awards for his "Daniunan Village" series of novels, which deeply impressed Taiwan's literary circle. He was once listed by prominent literary critic Yeh Shih-tao as one of the most iconic writers of Taiwan's nativist literature of the 1970s and a representative of the new generation of writers who took the baton after writers like Wang Chen-ho (王禎和), Huang Chun-ming (黃春明), and Wang Tuo (王拓). He has been the recipient of quite a number of awards, including the Wu San-lien Literary Award (吳三連文學獎), Wu Zhuo-liu Literary Award (吳濁流文學獎), China Times Literature Award Novel Recommendation Prize (時報文學獎小說推薦獎), United Daily News Prize (聯合報小說獎) (now the United Daily News Literature Award (聯合報文學大獎)), 2013 National Awards of Art (國家文藝獎), and the 24th Oxford Award for Taiwan Writers (台灣文學家牛津獎).


Born Liao Wei-jun (廖偉竣) in Erlun Township, Yunlin County on February 15, 1952, Sung Tse-lai may have self-deprecatingly called himself a "Hokkienized Hakka," but deep down, he still embodies the dauntless and hard-working Hakka spirit. In 1976, he graduated from the National Taiwan Normal University with a degree in history, and then spent two years completing his military service in Pingtung. After this, he took up a teaching position at Fuxing Elementary School in Changhua and settled down in Lukang.

The Formosa Incident of 1979 had a profound impact on Sung. It was a watershed that made him reconsider his identity, and the series of political writings that followed reveal his critiques of and insights into current events. In 1981, he got invited to attend the International Writing Program, a writing residency at the University of Iowa, and started writing in Taiwanese.

Keen on running a magazine, in 1986 he and some like-minded friends jointly founded "The New Culture (台灣新文化雜誌)," and in 1995, he joined Wang Shih-hsun (王世勛), a legislator of the Democratic Progressive Party, to found New Taiwanese Literature Quarterly (台灣新文學雜誌). Six years later, he joined forces with Lin Wen-chin (林文欽), Wang Shih-hsun, and the Taiwanese Literature Camp (臺語文學陣營) to found "Taiwanese  e Literature & Arts (台灣e文藝)." Over and over again, such endeavors demonstrated Sung's commitment to promoting Taiwanese native consciousness and the New Literature movement.

Sung's father, having had the opportunity to receive education during the years when Taiwan was under Japanese rule, could be considered an intellectual among the rural population. However, Sung's father had suffered an unfavorable outcome in life since he was drafted into service during the Second World War to fight for the Japanese in the Pacific Theater. Coming home with the scars of war, the elder Sung in the eyes of the son was vulnerable, and yet, violent when losing his temper. On the other hand, the mother was little different from any other rural woman of the time, exhausted by work and incapable of fighting back. The young Sung's once cheery outlook on life was shattered. Seeing his family as if a microcosm of Taiwan, he couldn't help asking: "Aren't we, the generation born after the war, coming into this world bearing the misfortune and humiliation of the island of Taiwan?" As such, the home environment became a prominent feature of his future writings.

During the years in junior high school and high school, Sung was very much frustrated because his reading was confined to textbooks. After finishing his studies at Huwei High School (虎尾中學) (in a different class to fellow writer Lin Shuang (林雙)), he passed the Joint College Entrance Examination and entered the History Department at National Taiwan Normal University (師範大學), a rare honor for someone from a rural background like his. Sung had hoped to be a student of educational psychology.

During the four years in college, Sung not only eagerly studied history but also sought out knowledge from a variety of other fields. Since the wave of modernism was prevalent at the time, social sciences, including anthropology, psychology, and sociology, became the focuses of interest and studies of Sung. At the time, the Chih Wen Publishing Co. had put out the "New Wave" series introducing Western philosophies, social sciences as well as classical literature, among which many important works of psychology. Sung found many resources from Chih Wen’s publications. He learned to interpret the works of Henry James and James Joyce through the psychological research of Erich Fromm.

However, in the course of his studies, chronic ailments plagued Sung. In his self description, he said, "At the time, I had kidney stones, nervous exhaustion, bronchitis, and blood in my stool. It seemed like I was a weeping willow, worn out early in my hey days, with an ashen and deathlike face. I was just 25." The physical ailments seemed to have constantly entangled him, leaving him physically and mentally exhausted.

After 30 years of teaching, Sung retired to focus on his writing, and in 2009, he completed his thesis for a Master's degree in Taiwanese literature from National Chung Hsing University. In 2011, he switched from writing to research, publishing "300 Years of Taiwanese Literature," which took reference from the critical theory of Canadian literary critic and theorist Northrop Frye. In 2012, just in time for his 60th birthday, he was admitted into the doctoral program in Taiwanese literature at National Cheng Kung University. Sung said: "I've retired, and a diploma won't help me in any way." What matters to him is that an academic institution which offers abundant resources and good environment for discussion can help him conduct his research and accomplish his mission of expanding Taiwanese literary theory. This is the best encapsulation of Sung Tse-lai's lifelong passion for Taiwanese literature.