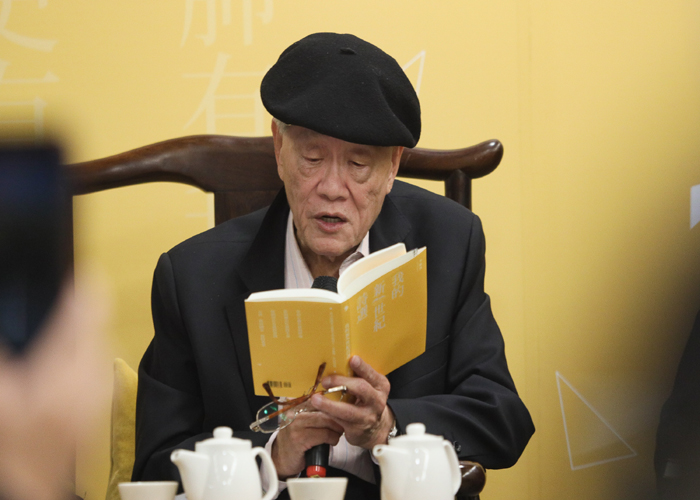 Name: 李魁賢
Born: 1937
Place of Birth: Taipei, Taiwan
Did You Know...?
The poetry of Li Kuei-hsien has not only carved out his own unique place in Taiwan's literary history, but has also been translated into a wide array of foreign languages, receiving poetry awards in India, Mongolia, Bangladesh, and Macedonia, as well as being nominated three times by the International Poets Academy of India as a candidate for the Nobel Prize in Literature.

Li Kuei-hsien was born in 1937 in Japanese Taihoku, in what is now the Datong District of Taipei City, and was evacuated to Tamsui in 1944 during World War II. In 1950, he began studying at Tamsui Junior High School (now Tamsui Municipal Junior High School) and spent his childhood and adolescence in Tamsui before eventually returning to Taipei to pursue studies at an engineering college.

In junior high, Li became interested in literature and began reading a variety of Chinese popular literature, translated novels, newspaper supplements, journals, and magazines. In April 1953, under the pen name Hengxin, Li published his first poem, "Cherry Blossoms," in the magazine Wild Wind. The poem depicted cherry trees that endured the ravages of winter, fighting back against the harsh weather despite their fading leaves and the hardships they suffered, holding out for the return of spring.

That same year, Li Kuei-hsien enrolled in a five-year chemical engineering program at Taipei Institute of Technology (now National Taipei University of Technology). Although his studies had nothing to do with literature, his unquenchable passion for writing and his boundless poetic imagination drove him to keep writing.

Between 1954 and 1961, he had a large number of poems published under the pen names Hengxin and Fengti in poetry journals such as Wild Wind, Modern Poetry, Seagull Poetry Journal, and Ocean Poetry Journal. During this time, Li also tried his hand at prose, taking part in a contest run by New New Literature with his short story "The Destroyed Flowers," winning the prize for Best Work. However, he always felt that his prose writing lacked a central theme, so rather than continuing down that path, he focused his energies on poetry instead.

In 1963, he published his first book of poetry, "The Columbarium and Others," under the nom de plume Fengti, with his second book, "The Loquat Tree," following the year after. From these two collections, which have a slightly modernist and lyrical tone and a rich variety of themes, from "The Land of Pineapples" depiction of a young northern man's longing for the sunny south, to abstract contemplations on life and longing via meditations on the transition of the seasons in "Pace at the End of July," "Remembrance of Autumn and Death," and "O Spring," we can see Li Kuei-hsien's light, sincere touch as he shows to the world his literary determination to pursue ideals of "love" and "liberty."

While he continued to publish poetry collections, Li hit a block in his writing between 1962 and 1964, during which time the number of poems he produced dropped dramatically to just three or four a year. In 1964, the local magazine Taiwan Art and Literature and the poetry journal Li were launched in quick succession, which in a way served as a call for local poets and writers to return to the fold. With the mutual encouragement of like-minded friends, Li Kuei-hsien, who had moved to industrial work to raise his family, found his passion for creative writing rekindled.

After 1966, he published around a dozen poetry collections, including "Nangang Poetry," "Naked Roses," "Images of Dusk," "Requiem," "Gentle Beauty," "Between Heaven and Earth," and "20 Love Letters to Chile." He also published the six-volume "Collected Poetry of Li Kuei-hsien." His poems have received widespread acclaim, including receiving the Lai Ho Literary Award, the Contribution to New Taiwanese Literature Award, and the Wu San-lien Literary Award for New Poetry. In 2003, his narrative poem "2-28 Requiem" was published in volume 45 of Literary Taiwan and was selected by composer Ko Fan-long to be performed at the National Concert Hall as an orchestral choral piece.

Li Kuei-hsien has cultivated his literary gifts for decades, enriching Taiwanese literature with his rich, artistic, and realistic poetry. He has also participated in poetry exchanges throughout Asia, mainly in Taiwan, Japan, and South Korea, as well as leading groups of Taiwanese poets to India, Mongolia, Turkey, Cuba, Chile, and Bangladesh to participate in international poetry festivals hosted by those countries and to engage in exchanges of ideas with poets from around the world. In addition to these visits, he has also compiled and published an anthology of Taiwanese poets, introducing Taiwanese poetry to the countries he visits and inviting international poets to participate in poetry festivals in Taiwan, opening a window on Taiwanese literature for the world.