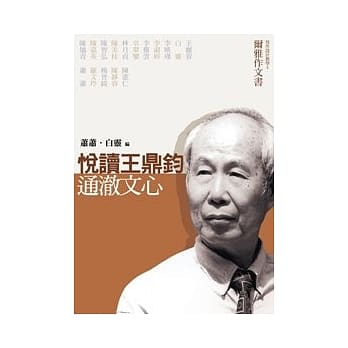 ‧ Chinese Name: 王鼎鈞
‧ Date of Birth: April 4, 1925
‧ Place of Birth: Shandong, China
‧ Did You Know?
Once called "the eyes of a generation," contemporary prose writer Wang Ding-jun lived through the White Terror and bore witness to the blossoming of Taiwanese literature, newspapers, radio, and television. He is described as a 'human memoir' of Taiwan's literary scene of the past 3 decades, from a newspaper editor to a wanderer among the literati, and he has watched first-hand as the literary and media worlds went through chaos and emerged from the loosening of authoritarian confines. Experiencing this turbulence himself, he found the means to spread his wings through literature.

Wang Ding-jun, who has written under the pen name of Fang Yizhi, has lived a life of rootlessness due to the whims of fate and this nourished his literary sense. His countless experiences have refined his writing, helping him establish a wonderful style that evidences the concept that good workmanship will stand the test of time. In his creative career, he has worked in some 40 forms, covering a broad span from essays and criticism, through poetry and prose, to scriptwriting. Most of his work has been in prose, marked by a style that highlights the truth through short-form writing, presented in the language of everyday life and connecting to the souls of his readers.

After graduating from junior high school at the age of 14, Wang joined the military. He officially published his first work in the Ankang Daily in Shaanxi Province, a piece entitled "Poem of the People of Red Bean Village." In 1949, he decamped to Taiwan with the retreating Nationalist Army, and two years later, he joined the Fiction Research Group of the Chinese Writers & Artists Association's Chinese Literary Arts Creative Research Department. There, he received guidance from Wang Meng'ou, Zhao Youpei, and Li Chendong, laying a strong foundation of creative capability. He was also involved in the creation of radio and stage plays, and often published essays and novels in newspapers, developing a wide range of artistic and literary contacts.

During this time, Wang also took up work teaching at the College of Chinese Culture (now Chinese Culture University), National Taiwan Academy of Arts (National Taiwan University of Arts), and Shih Hsin School of Journalism (Shih Hsin University), teaching journalistic writing and broadcast writing. He also worked as head of the editing teams at the Broadcasting Corporation of China, China Television, and Cheng Chung Books, as well as being deputy editor for Youth Publishing, China Times, Taiwan Tribune, and several other papers. Further to all this, Wang also served as editor-in-chief for Chinese Language Monthly. In 1978, he was invited to the United States by Seton Hall University, and today he is retired and living in the US, where he continues to focus on his writing.

Among Wang’s writings, the most widely known are the "Three Books on Life"—"An Open Life," "The Touchstone of Life," and "We Modern People"—which are known for their rational and clear style of expounding life philosophies. His "Four Books on Composition"—Inspiration," "The Seeds of Literature," "Seven Skills of Composition," and "19 Questions About Composition"—remain best-sellers in Taiwan. He has also earned the title of "The Master of Prose" for his unique prose works such as "Broken Glass" and "Swirls in the Heart."

Other works that have attracted widespread attention were the “Memoir Quartet” written from 1992 to 2009—“Yesterday’s Clouds,” “Angry Youth,” “Guanshan Raiding the Road,” and “The Literary Wilds”—in which Wang Dingjun uses a realistic approach to record his life’s insights in a concrete and detailed way. In the midst of a tumultuous period of history, from the Second Sino-Japanese War to the Chinese Civil War, he stumbled on enlightenment through literature, helping him through the tribulations of his youth.

The writer Yin Di once praised Wang Dingjun as “making good use of lively forms and simple language to express profound sentiments. His words are both idealistic and closely focused on reality.”

Wang has been part of the literary scene for more than seven decades, and along the way, he has received the Sun Yat-sen Memorial Award from the Chinese Literary Awards Committee, the Golden Tripod Award from the Government Information Office, the China Literature and Arts Medal Literary Criticism Award from the Chinese Writers & Artists Association, the Zhongshan Literature and Arts Creative Award from the Sun Yat-sen Academic and Cultural Foundation, the Prose Recommendation Award from the China Times Literature Awards, and the Wu Luqin Prose Award, which is held alternately by the United Daily News and the China Times. In 1999, Wang Dingjun's "An Open Life" was selected as one of the thirty classics of Taiwanese literature. In 2001, Wang received the Outstanding Chinese Member medal from the North America Chinese Writers Association. And in 2014, he was honored with the National Awards of Art.

Wang once said, while he wouldn't change a thing about his life in literature, he does regret that in his youth, when he could have had so many options open to him, he only had one. While that makes him sad, he still has no regrets about how things turned out. And now, his life of turbulence has made him into a literary giant for the ages.